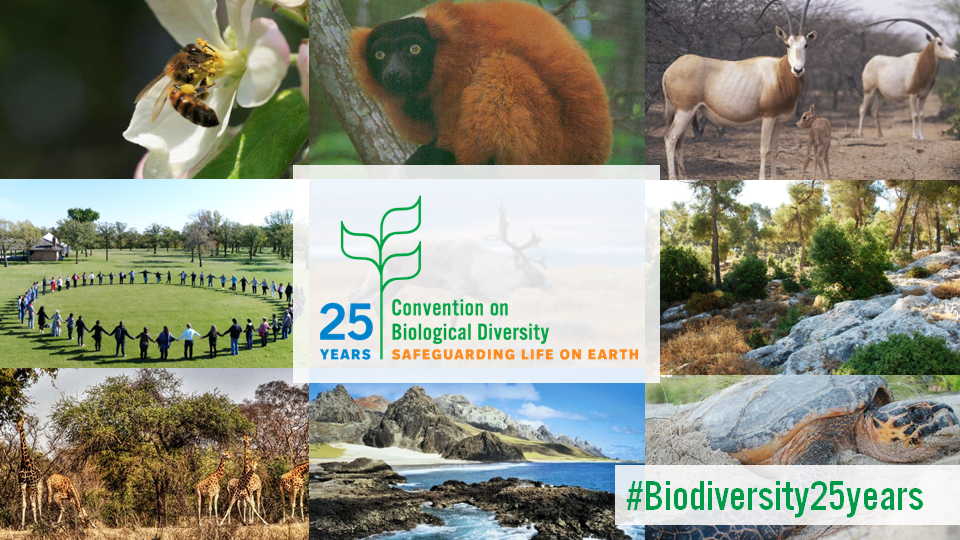 This year the 22nd of May will be a celebration of the progress made since the implementation of the Convention on Biological Diversity 25 years ago. The International day for Biological Diversity was designed to overlap with the UNs post-2015 Sustainable Development Goals and the date chose to commemorate the adoption of the Convention of Biodiversity in 1992 at the Rio Earth Summit. Previous themes promoted over the years have included: biodiversity and sustainable tourism, water and biodiversity, invasive alien species and biodiversity and climate change.

Individual countries are celebrating the day with their own events; Ireland, for instance, is running a national biodiversity week over the course of nine days with >50 events across the country to reconnect with their native wildlife and Australia has invited people to brush up on their ID skills by identifying wild animals and plants using the QuestaGame app. The CBD will also be publishing success stories from member countries on their achievements in meeting various objectives including the Aichi Biodiversity Targets and Sustainable Development Goals.

Whilst this day will be celebrating our progress on biodiversity conservation and trying to engage the public in its activities, the outlook given by recent reports remains bleak. Human activities have severely impacted every corner of the globe, with countless species suffering as a result.

The IUCN red list stores a repository of information on the extinction threat of species from all taxonomic groups and publishes a Red List Index which looks at changes in extinction threat using only data for species which have been assessed at least twice. Given the difficulty of collecting this type of data the summary statistics are currently only available for birds, mammals, amphibians and corals. Perhaps unsurprisingly, all groups show a decline of varying severity with corals showing the sharpest drop in survival and amphibians retaining their place as the most threatened group.

A recent report by BirdLife International has used data from the IUCN Red List and its own work to lay out the current predicament of birds globally, including reasons for decline and management approaches to tackle these. As one of the most well-studied groups reports such as these give us a very frank view of their predicament. The report contains a number of worrying statistics including the report that 3967 species, 40% of all birds, are declining, with cranes, old world vultures, albatrosses and parrots amongst the most threatened groups. More than 161 bird species have already been declared extinct since 1500, a speed greater than the background rate.

A little closer to home the UK State of Nature Report 2016 produced by the RSPB used data from >50 organisations to generate an equally bleak outlook for UK wildlife. A new index for measuring how intact a countries biodiversity is has revealed the UK to be one of the most nature-depleted countries worldwide. It also revealed that whilst the UK is not on target to meet the Aichi 2020 targets, the wealth of nature conservation volunteers in the UK is helping us monitor and bring back species across the country. The report also points out some of the positive sides of changes in the UK countryside including increased winter survival of some species due to miler temperatures and autumn-sewn crops. And whilst the UK currently falls short of the global target of 17% protected land area, a combination of nature reserves and designated sites means the total is not too far off at 12%. Some species have even been reported to be increasing in recent years including the Dartford warbler and sand lizards which have benefited from conservation initiatives.

So what is causing this devastating loss of global diversity? Whilst climate change is predicted to have the biggest lasting effects on the distribution of biodiversity it is agricultural development which has been the cause of many declines due to the unprecedented speed at which it has changed our landscape. The State of Nature Report found it affected nearly half of all species it studied whilst the birdlife report showed it impacted 74% of birds globally. Invasive species are also a serious threat to global wildlife, especially in island habitats. Through either competition, predation or habitat destruction, native wildlife is often on the losing side.

Much work is clearly still needed in order to slow the tide of biodiversity depletion in the UK and abroad. Monitoring these changes is both expensive and time consuming but wholly necessary if we are to truly understand what we are on track to loose. The situation in the UK is proof, however, of the impact that volunteer groups and public will can have on boosting the chances of wildlife survival. So this International Day for Biological Diversity why not find out what groups are active in your area and explore the diversity that’s right outside your door.

To find out more about this and previous years International Day for Biological Diversity see the CBD website below: