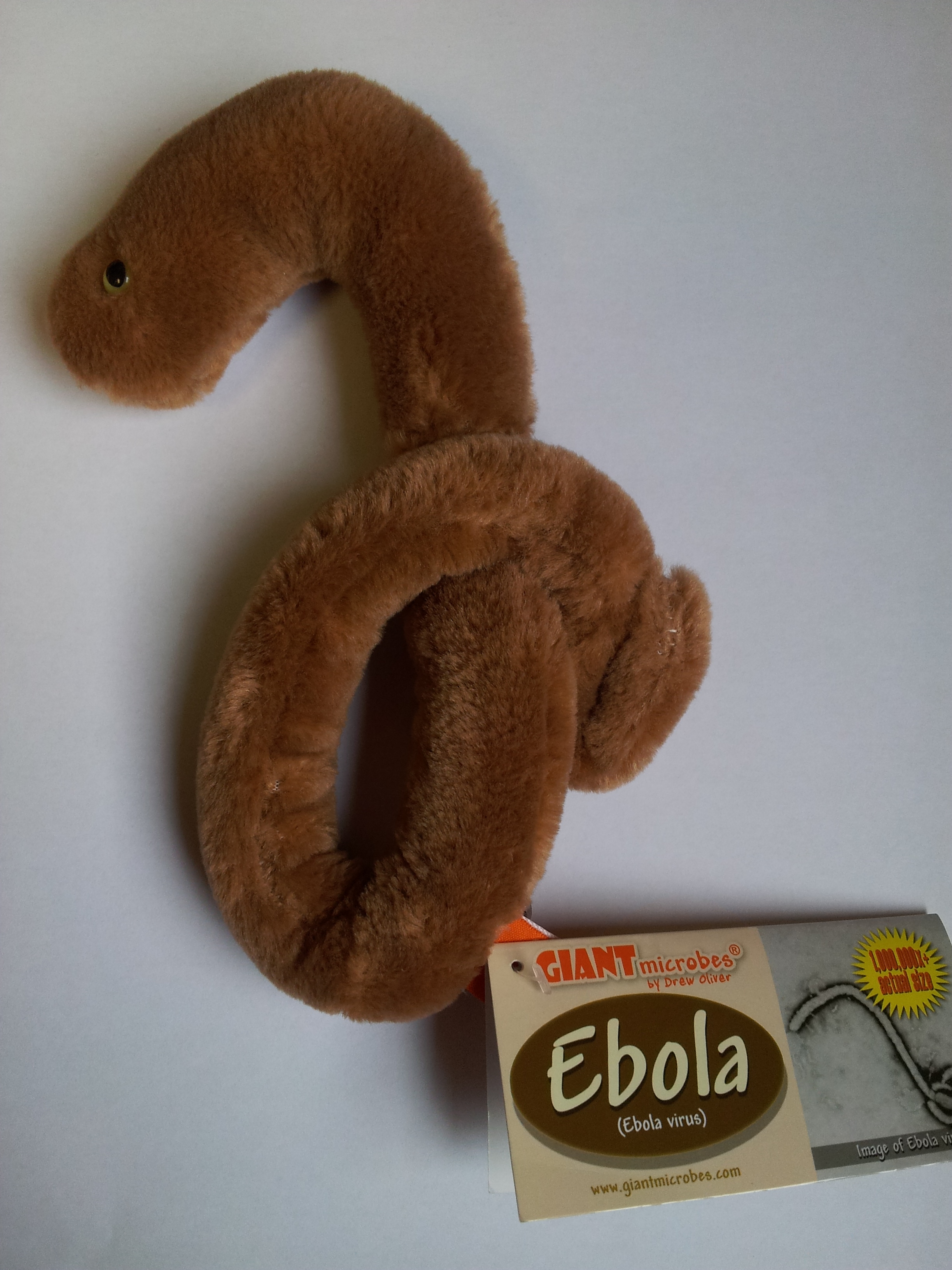 Band Aid is a tried and tested method of public engagement, bringing Ebola to public attention and giving us all something we can do to help rather than just scaring us. What is also needed here and in West Africa, is education.

For a novel method of education, I bring you Giant Microbes, which are sold as teaching tools. They are soft plush “cuddly” toys, anthropomorphised versions of microscopic images of microbes, and provide information on the microbe and the disease it causes in the attached label. Apparently they are currently sold out!

I own their version of Ebola virus (shown opposite is the actual toy sitting on my desk): its based on the shape of the virus seen in an electron microsopic image. My colleague owns a tuberculosis (TB) virus toy. Bought at a public health conference, the label for my Ebola toy is dated 2004 and describes the symptoms, the 50-90% mortality but also tells me that outbreaks are limited to a few hundred cases. The toy produced now, in 2014, will have a very different set of statistics to present.

The West African outbreak today stands at 14383 cases, with 5165 deaths in 6 countries.

Of those 6 African countries, Nigeria and Senegal have had their Ebola Virus Disease (EVD) outbreaks declared as officially over. [A national EVD outbreak is considered to be over when 42 days (double the 21-day incubation period of the Ebola virus) has elapsed since the last patient in isolation became laboratory negative for EVD].

Last week, my colleague had house-guests.  On seeing the TB “cuddly toy” at home, they asked where was the Ebola one (?) and she was gratified to say “its at work”!  Clearly information on Ebola has successfully entered UK public consciousness.

Ebola is scary and not cuddly

My colleague and I have spent many years focused on Global Health so I want to make clear that we are well aware of what these viruses do and how much ill-health and death they bring to low & middle income countries.

That’s why I chose the electron-microscopic image of Ebola virus for the cover of CABI’s famous Tropical Diseases Bulletin (it’s been around since 1912). And that decision is why the toy was bought for me!

I see a parallel here between Ebola now and TB in the UK’s past history, when there were no drugs to combat TB, and isolation in sanatoriums with quality health care was the only effective solution.

The cuddly toy manifests as something soft and safe and friendly but, in reality, represents a dangerous and frightening truth. Ebola is a serious and scary virus and will need a prolonged plan of attack.

So come on UK and Europe, listen to Bob and donate here. Buy the song! More hospitals, trained staff and drugs are needed in Africa…to fight Ebola (and TB).

Map: The Africa without Ebola

ICTs and access to health Information and knowledge. AHILA14 Congress.