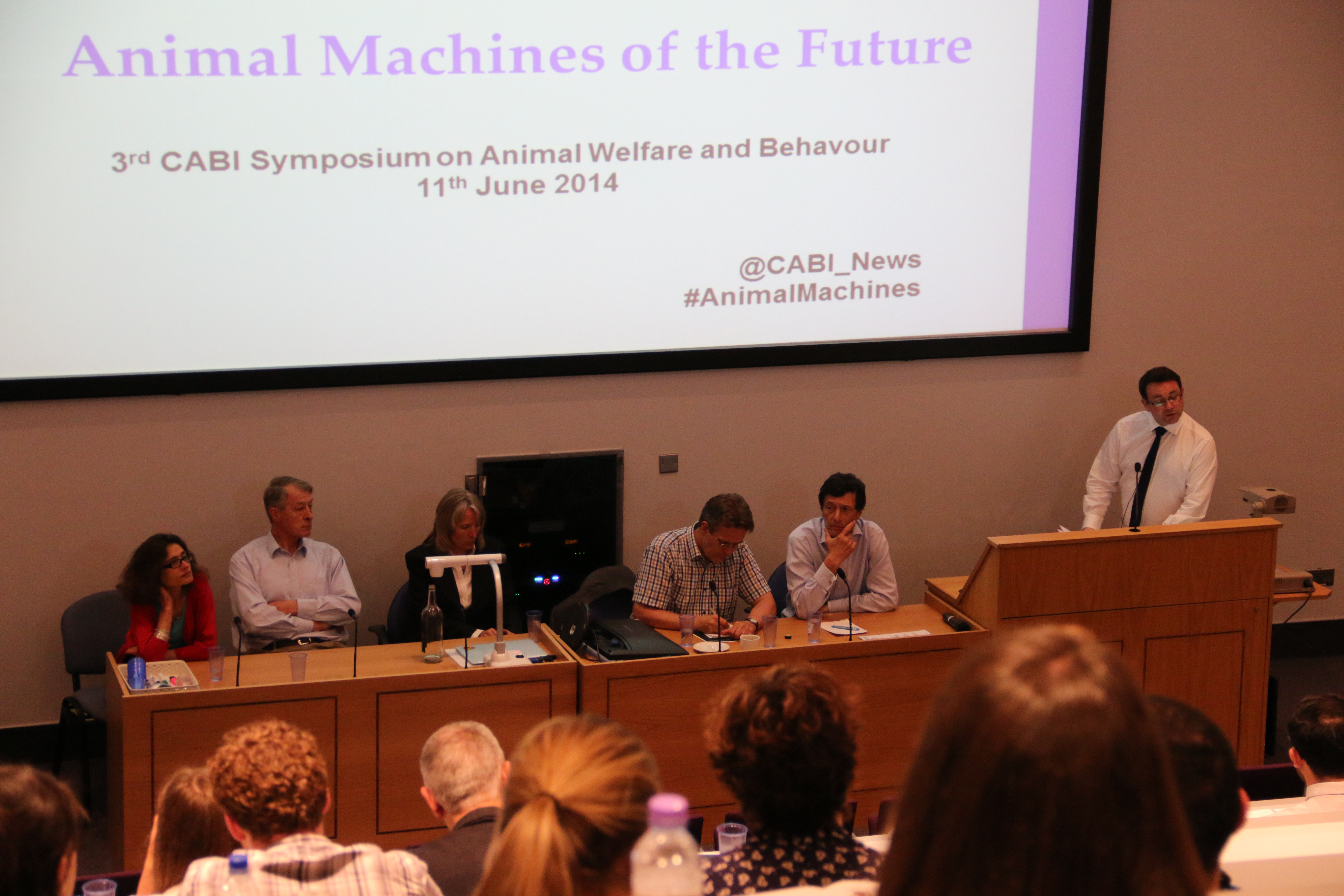 A symposium organized by CABI and the Royal Veterinary College to mark the 50th anniversary of Animal Machines, by Ruth Harrison, reviewed how far we have come in understanding and improving animal welfare since the publication of the book, which marked the start of the movement for welfare of animals in intensive production.

“Would Ruth be pleased with the progress that has been made so far?” asked the panel of international experts on animal welfare, ethics and sustainability. The general consensus of opinion was that there are many things she would be pleased about (e.g. EU-wide bans on veal crates, sow stalls and barren battery cages), but she would be disappointed with the slow speed at which improvements are being made, particularly in countries outside the EU. However, it was suggested that she would be ‘delighted’ by the thought-provoking discussions that took place during the symposium, which highlighted important questions that remain to be addressed.

Michael Appleby of World Animal Protection (formerly WSPA) emphasized the importance of taking a global approach to animal welfare. To highlight the point, he noted that whilst there has been a phasing out of barren battery cages in Europe, their use worldwide has actually increased due to the expansion of poultry production in other regions. His colleagues at World Animal Protection (including Ricardo Fajardo, who was also present at the meeting) are working on an ‘Animal Protection Index’, which will provide a ranking of the animal welfare policy and legislation of countries and governments around the world (publication is expected September 2014). They hope that global communication can be a catalyst for real change in animal welfare.

Animal welfare from the perspective of a large food company was discussed by Dr Jen Walker of Dean Foods (one of the largest processors of milk in the USA). The increasing importance of animal welfare to consumers and the need to ‘protect brands’ and ‘build consumer trust’ means that companies are more frequently taking a lead role in animal welfare initiatives. She noted that improving human-animal interaction is the most important way that standards can be raised in animal production.

Professor Peter Sandøe from the University of Copenhagen explained how the publication of Animal Machines led to an expert committee investigating intensive farming practices in the UK and the subsequent publication of the Brambell Report. This report has had a huge impact on how production animals are regarded and has shaped legislation both in the UK and the European Union. However, while legislation has had a positive effect on animal welfare in the EU, this has not taken off in many other parts of the world. Due to international price considerations, when welfare improves in one region, production often moves to other parts of the world.

Professor Sandøe also pointed out that while science can be used to measure ‘welfare indicators’, there is always an ethical component to welfare assessment. To illustrate this, he used an example of a paper by Sherwin et al. (2010) that compared the welfare of laying hens in different housing systems. Contrary to what was expected (and to what animal welfare organizations support), furnished cages were found to be better than all other systems (including barns and free-range systems) in terms of measurable indicators.

Looking at the ‘big picture’ of livestock production, in terms of  economics, health, climate change, food security, ethics and sustainability, Dr Tara Garnett discussed alternative scenarios for future livestock production and what impact these may have on animal welfare. Dr Garnett, of the Food Climate Research Network, said that different approaches being taken towards ensuring food security include more efficient production, reducing consumption and ‘transforming the system’. She explained the risks and benefits of four potential scenarios for the future: more intensive poultry production; artificial meat production; using livestock to turn ecological leftovers into food; and plant-based eating.

Professor Donald Broom (University of Cambridge) explained the importance of sentience – having the awareness and cognitive ability necessary to have feelings – to the animal welfare debate. He gave an insight into how opinions on which animals are sentient have changed over time, and provided some fascinating examples of how animals are capable of (and appear to enjoy) learning. Unfortunately he did not have time to go into great detail on this interesting topic, but it is the subject of his forthcoming book ‘‘Sentience and Animal Welfare.’

The panel concluded the symposium by saying that ‘much has been done, but much remains to be done.’ However, there is hope that there will be even more progress in the next 50 years, particularly if animal welfare can be considered globally, rather than nationally, to avoid shifting animal welfare problems from one country to another.

The 3rd CABI Symposium on Animal Welfare and Behaviour, entitled ‘Animal Machines of the Future: Farm animal welfare – 50 years after Animal Machines, how far have we come and what next in a world concerned with food security?’, was held on 11th June 2014 at the Royal Veterinary College.

Presentations from the meeting will be available soon on VetMed Resource.

Tourists encounter animals in many different situations: photo opportunities, street performances, animal rides and specialised ‘sanctuaries’ such as elephant homes and tiger temples. Tourism may benefit wildlife, by funding wildlife animal conservation, as well as providing vital income for local communities, but the exploitation of animals in animal entertainment can be a cruel and degrading experience for intelligent sentient creatures.