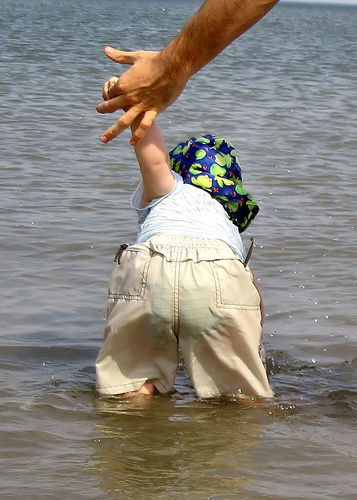 This week we heard that being born in August in England leads to lack of self-esteem and a lifelong tendency to underachieve (Does when you are born matter?, from Institute of Fiscal Studies (IFS)). This appears to be a follow-up study to one focussed on primary school children in 2007, and it certainly got covered well: BBC, Guardian and Telegraph to name just a few.

Speaking as an August baby, the only reason why I grew up lacking confidence and my brother, also an August baby, lacked self-esteem (note the difference between us) was that we had a father who was, frankly, a bully. For us, school was an escape; weekends could be very hard.

So you can imagine what I first thought when I heard about the study on BBC Radio4 Tuesday morning (1/11/2011). My second more rational thought was about this link to underachievement, with 20% less of us going to Russell Group universities. Is it linked to our school year starting in September, is it therefore confined to the UK? Is it linked to day length? Is there a difference between decades reflecting changes in society?

The answer to my questions would lie in studies of August-born children in northern France, or southern parts of Scandinavia, or closer to home, Eire.  Or looking at other countries which have cut-off dates for school entry. Very close to home, it’s February cut-off in Scotland.

I went looking on CABI's public health database, Global Health, for studies on health or educational attainment or adult socioeconomic status, which others may have also linked to birth month (see Further Reading for some examples).

There were not that many papers: most turned out to be linked to the season rather than a specific month; because they weren’t looking? Understandably, season of birth was often linked to maternal nutrition and so to poor outcome for the child. There were also papers where links have been made between season of birth, and allergies, multiple sclerosis, schizophrenia, diabetes, and even myopia.  Interestingly, a few papers seem to be now emerging on “lifecourse socioeconomic position” but up until now, no consideration has been given to season let alone birth-month.

Regarding this IFS report, the articles in the BBC magazine and in the Guardian were particularly informative and the consensus seems to be that it’s the artificial cut-off for starting school: whatever a country chooses, the children in the last month preceding the cut-off lag behind.

Meanwhile, I really must find time to read it! Possibly to calm down.

Image: Pixabay January 24th is the United Nations’ International Day of Education, a celebration of the role of education for peace and development. The Sustainable Development Goals are rightly driving many projects amongst the world’s poorer nations…

How can we inspire young people to pursue careers in agriculture?