The earthquake that hit Haiti may have killed as many as 200,000, and delivering food to survivors is proving very difficult. However, Haiti was already suffering from major problems in trying to feed itself well before the earthquake struck, as detailed in many papers on CAB Abstracts.

Haiti has a notable problem of food security, write Furio Massolino and Andrea Pardini from Movimondo, Italy in an paper in CAB Abstracts. Even before the earthquake, 48% of people had insufficient food, food prices doubled from 1980 and 1990 and further increased 5 times between 1991 and 2000, they report. Water availability and quality is another problems to be added to food insufficiency. Haiti is among the countries with the biggest sub nutrition and global malnutrition rates at a world-wide level says Dixis Figueroa Pedraza of the Universidade Estadual da Paraíba, Brazil. 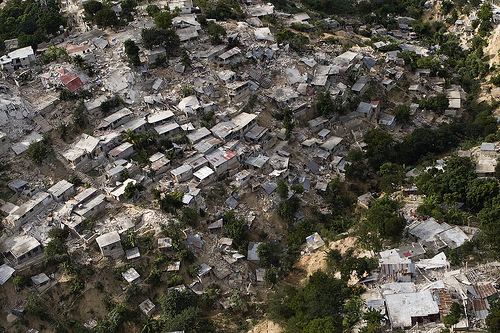 Earthquake damage in a poor area of Port-Au-Prince (UNDP)

Environmental problems have compounded Haiti's problems. The country, with a forest cover estimated at 3% of all land area, has experienced severe degradation of its natural resources and a significant change in its land cover, says Frito Dolisca of Auburn University. The deforestation has magnified the impacts of natural disasters. The World Food Program had to give life-saving food and nutrition assistance to the victims of 4 storms in Haiti in 2008. Around a thousand were killed, and a million made homeless.

Following the earthquake, The UN has set up a "Food Aid Cluster", targeting the needs of two million people. The World Food Programme is distributing high-energy biscuits to 50,000 people in Port-au-Prince. Disaster relief will obviously be a priority in the short term, but will Haiti's fragile agricultural system be able to recover?

Around $250 million has been requested by aid agencies for food aid, and about £25 million for agriculture. The FAO says money is needed to support to food production in fields and backyards, not just in and around the area hit but in rural areas not directly affected but which will nevertheless feel the aftershocks of the capital's collapse. Ari Tubo Ibrahim, the FAO Representative in Haiti, said. "We can expect huge displacements of people and damage to agricultural infrastructure so it is crucial that we do all we can to support local food production to sustain livelihoods."

Massolino and Pardini point out that food deficiency is mitigated by natural food resources in rural areas where many different species are cultivated together but it can be extreme in the towns. Agricultural systems are not efficient and, at the same time, enhance soil and genetic erosion. They describe a development project in the Carrefour rural area which seeks to increase national food production by introducing complex agro-forestry systems. Agronomic training of local farmers, organization of small farmers including legal protection on land tenure, introduction of low input modern agroforestry systems are approaches that can diversify food production through the year and reduce soil and genetic erosion. An EU-funded intervention project that was delayed by the recent civil war is giving positive results now.

Looking to the longer-term prospects, Johan Dahlstrand, and Mats Lundahl of the Stockholm School of Economics, Sweden note that credit access has been a major problem for the agricultural poor in Haiti. However, from the 1980s a new institutional framework for microcredit, has become established mainly in urban areas, has beginning in the capital and gradually extending into provincial towns as well. The charity ActionAid has set up a micro-credit scheme in Haiti enabling women to borrow capital on a six-month cycle at a low interest. This will allow the available capital for loans to increase by 25% at the start of each new cycle, enabling more women to take advantage of the scheme.

The charity is also assisting in the marketing and sale of rural products. This will include helping women turn their raw products into saleable items such as jams, peanut butter and banana flour. The project will eventually enable financial independence among the women through a compulsory savings scheme.

How can the environmental problems be addressed? Dolisca says various approaches have been used to try and reduce degradation of natural resources in Haiti. Regulations, fines and taxes have been unsuccessfully implemented to persuade farm households to adopt conservation measures. Negative impacts on the welfare of farmers limit the efficiency of these approaches for forest conservation. However, results suggest that agricultural subsidies tied to environmental conservation would promote a more sustainable resource use in Forêt des Pins Reserve.

For details of the Disasters Emergency Committee Appeal for Haiti, go to: http://www.dec.org.uk/donate_now/