Climate change and its implication on Biological Control: Case studies from Latin America

Dr Yelitza Colmenarez, CABI Brazil Centre Director & Plantwise Regional Coordinator – Latin America and Caribbean, recently presented at the First International Congress of Biological Control in Beijing, China, on the fascinating issue of climate change and the impact on the Biological Control of agricultural pests and diseases in Latin America.

Here we present Dr Colmenarez’s expert insight (including link to her full PowerPoint presentation) into what pests and diseases need to prioritized and why Climate Smart Agriculture could be the key to fighting these risks to crops exacerbated by changing climatic conditions in countries such as Brazil, Mexico, Chile and Peru.

Climate conditions have an important influence in the development of insects, mites, nematodes and microorganisms associated to agriculture as pests or biological control agents.

The neotropical region is well known for having a wide variety of agroecosystems hosting high biodiversity, including natural enemies (parasitoid, predator and entomopathogen species) associated to the native but also to those invasive pests occurring in agricultural commodities.

The climate changes are showing to be more favourable for the establishment of many of native pests and potential and/or currently present invasive species in areas where they were not expected to occur before. Thus, climate change observed in different countries from the neotropical region highlights the need of investigate the effect of the abiotic conditions changes, such as the increment of temperature, precipitation level, humidity, flooding and drought conditions on the distribution range of both agricultural pests and their biocontrol agents.

This study shows some case studies focusing in key commodities from Latin America. It also includes a revision about functional response models which help to demonstrate the impact of climate variations on natural enemy’s efficiency. The Climate Smart Agriculture approach will be discussed as a possible way of facing these current challenges in Latin America. 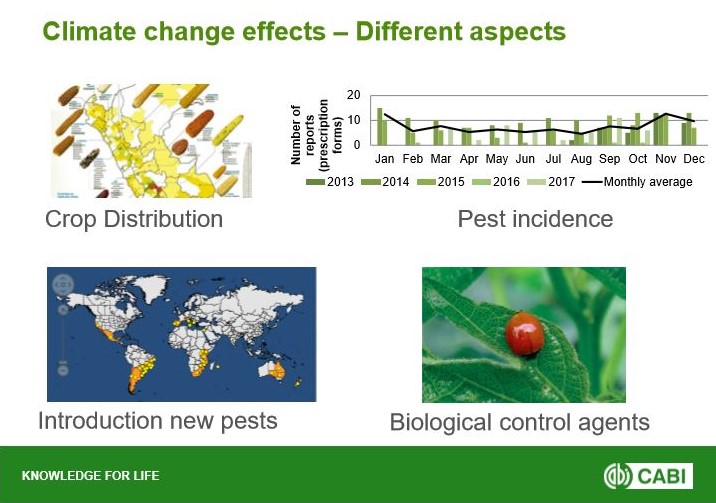 Dr Colmenarez’s PowerPoint presentation ‘Climate change and its implication on Biological Control: Case Studies from Latin America’ can be seen and downloaded from SCRIBD here.

Dr Colmenarez  is currently representing CABI in the International Organization of Biological Control acting as the president of the Neotropical Sub Region (IOBC-NTRS).