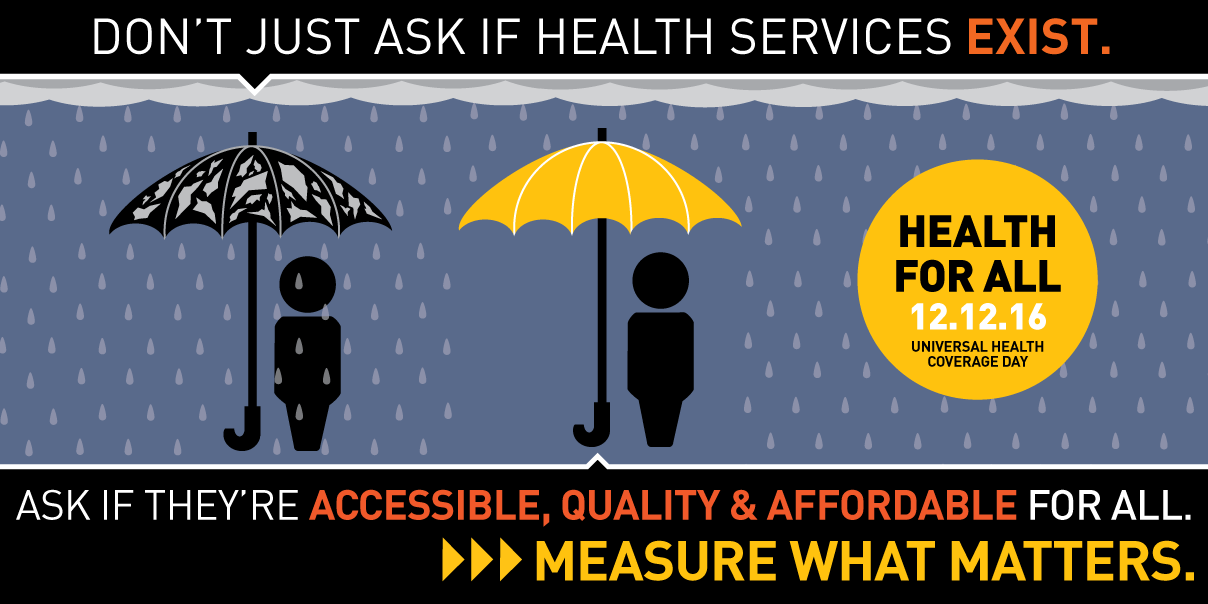 WHO definition: Universal Health Coverage (UHC) means everyone can access the quality health services they need without financial hardship.

This year it seems that organisations, governments and citizens everywhere are answering the call to UHC, whose annual awareness day is December 12th.

From this year forward, UHC is seen as central to improving health systems, improving economies, and ensuring global health security. The G7 group countries, the primary source of funding for Low and Middle-Income Countries (LMIC), met in Ise-Shima Japan 2016 and made UHC their umbrella concept. Through this, they seek to improve health systems and global health security.  Of the 17 SDGs agreed by the United Nations, just one is directly health-related but it is “achieving UHC”.

Judith Rodin, (President Rockefeller Foundation, has observed that “25 of the wealthiest nations all have some form of universal coverage, as do some middle-income countries including Brazil, Mexico and Thailand and lower-income nations, such as Ghana, the Philippines, Rwanda and Viet Nam, are working towards achieving UHC.”

Rather than talk about why we need UHC, I thought I’d talk  about what is actually proposed by middle-income and lower-income countries (LMIC) to fulfil UHC and what the NGOs, donors and global health community championing UHC would like it to encompass.

UHC systems vary from country to country: there is no one size fits all.  It very much depends on the minimum health outcomes a government wants to achieve and how much of its GDP it is prepared to spend. The main variables being the level of care delivered, who delivers it, who receives it and how it is funded.

UHC of itself does not mean universal access to health services nor care for all diseases. It’s about providing a basic level of health services (“Essential Packages of Health Services”) to as much of the population as possible.

The first UHC system was the UK’s National Health Service set up in 1948.

The USA has a non-universal system of health coverage.

What do LMIC see it as?

Over time,  as far as I can see, these basics for a cost-effective UHC have emerged:

Much of the information that now follows is derived from  the RSTMH 2016 Chadwick memorial lecture "Neglected Tropical Diseases in the Time of Blue Marble Health and the Anthropocene Epoch", given by  Professor Peter Hotez, Dean of the National School of Tropical Medicine at Baylor College of Medicine, Texas and President of the Sabin Vaccine Institute.

What the NGO and donor organisations and public health community would like to see included in UHC?

There are 17 NTDs recognised by the WHO and they are grouped together because they have 2 things in common: they disfigure and disable, and they are all linked to (and are drivers of) poverty. The main thrust of Peter Hotez’s talk was that this poverty exists in the wealthiest countries in the world,” that is the G20 countries +Nigeria, and that these countries need to invest in addressing it.  Many of these countries have or are moving to UHC by 2030, and the WHO believes  that NTDs can be part of the UHC goal, if endemic countries would invest as little as an extra 0.1% of their current GDP on control and treatment.

In describing the “poor living amongst the rich”, which he has branded as “Blue Marble Health”, Peter Hotez gave some telling examples. Brazil, Argentina and Mexico, the 3 wealthiest economies in Latin America, have 60-70% of the world's Chagas cases whilst China has an East-West poverty gradient such that SW China has the highest concentration of schistosomiasis.  Texas, home to his Sabin Vaccine Institute, has 5 million people living below the poverty line, some on less than $2 per day, and the poverty, crowding, ethnic diversity and climate has leant itself to the emergence of  Chagas  & Leishmaniasis.

Can UHC be achieved under the pressure of conflict driven migration or cross-border migrant workers?

Lebanon’s population of 4 million people has swollen by 30% since March 2011 due to the influx of Syrian refugees. Not having paid into the country’s health system, they are not entitled to health care and humanitarian agencies pay instead for the basics. Even so the indigent refugees still have to find out-of-pocket payments of 25% of their health costs.  I obtained these insights from a paper by Blanchet et al (Conflict and Health, 2016),  whose analysis of the situation leads them to argue it’s not possible for Lebanon to move to its stated aim of UHC, without restructuring their fragmented health system to include the refugees.

Why Texas is becoming a major antivaccine battlefield