This workshop meeting was jointly organised by the Pirbright Institute, Woking, UK and Cairo University, Egypt and was sponsored by the British Council Research Links Programme.

There were 50-60 delegates in attendance at the meeting, with approximately one-half of delegates coming from various faculties and Research Institutes of Cairo University. The other half of participants came from the UK, including the Pirbright Institute, Woking, Royal Veterinary College (RVC), University of London, Surrey University and Roslin Institute, Edinburgh. In total, 21 oral presentations, excluding invited speakers, and 17 posters were included in the meeting programme.

A representative of the British Council, Shaun Holmes, was scheduled to provide information on Newton Fund News and Future Funding Opportunities on day three of the meeting. I attended on behalf of CABI on day two of the event.

Day two was opened by Dr Shahriar Behboudi from the Pirbright Institute, who organised the workshop. He welcomed the participants and explained that "the aims of the workshop were to build long-term and sustainable links" between scientists in the UK and Egypt working in the field of infectious diseases of poultry and livestock.

A wide range of topics was covered, including:: Poultry production in Egypt: History and Facts; Identification of resistant lines of inbred chickens to low pathogenic avian influenza (LPAI); Molecular identification of Egyptian strains of rabbit haemorrhagic disease virus (RHDV); Coccidiosis in poultry: challenges for disease control in today’s global industry; Cloning and expression of Equine herpesvirus 1 for detecting infected or vaccinated animals; Modulating the gut microflora as an alternative to antibiotics to control infectious diseases in livestock; Using vitamin D3 to modulate T lymphocyte functions without inducing cytotoxic T lymphocytes (CTL) unresponsiveness; The role of epidemiology in the prevention and control of emerging public health threats; and International accreditation of Egyptian university laboratories.

This session continued with selected oral presentations and a poster session by early career scientists and PhD students from the UK and Egypt. In the afternoon, there were two group discussion sessions – one on Surveillance and epidemiology led by Prof. Javier Guitian from the Royal Veterinary College, University of London and the other on Poultry vaccines and vaccination strategies used in Egyptian farms led by Egyptian scientists including Prof. M. Shakal, Dr El-Zeedy and Dr Eman Hassan Ali.

Two more group discussions were planned for the following day – one led by Dr Paolo Ribeca on Bioinformatics and RNA seq of animal viruses and the other led by Dr Muhamad Munir on Biobank and its application.

Concluding remarks
The scientific content presented at this meeting was excellent and delivered by high profile speakers. I am very pleased that I was able to attend and publicise this workshop to a wider audience, on behalf of CABI, which has a long tradition of publishing unique scientific content from over 150 countries, including Egypt and the UK.

My next article for CABI Blogs will be about four invited lectures presented at the workshop on Day 2. 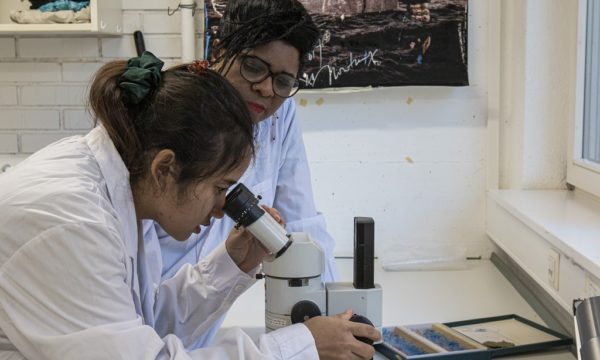