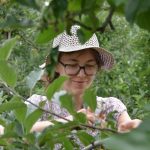 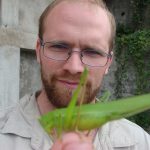 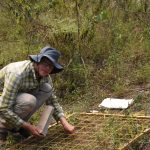 In this Q&A article we hear from three PhD students who have collectively spent over 11 years studying at the CABI Switzerland centre in Delémont working with scientists there to improve the monitoring and management of invasive species in Europe and Africa.

Find out from Judith Stahl, Benno Augustinus and Theo Linders about what they did, who they worked with and what’s in store after CABI.

What did the PhD’s cover and why is this research needed?

Judith is from Germany and was registered with the University of Bremen in Germany for this PhD. She assessed the benefits and risks of using native parasitoid species as a biocontrol method against the brown marmorated stink bug in Europe.

She said, “The brown marmorated stink bug, Halyomorpha halys, is an Asian agricultural pest that has invaded both North America and Europe. Its adults and nymphs feed on a huge number of crops, including fruit, vegetables, and ornamentals, causing damage to the plants which makes them difficult to sell at market.

This major pest is mainly being managed by spraying broad-spectrum insecticides, which can have negative impact on natural enemies and lead to the resurgence of secondary pests. Biological control is a more environmentally-friendly solution. In my PhD I mainly evaluated the potential of a European egg parasitoid, Anastatus bifasciatus, as a biological control agent of the stink bug pest.”

Benno is from the Netherlands and was registered with the University of Fribourg in Switzerland for this PhD. He worked on predicting the range and effectiveness of the leaf beetle Ophraella communa on controlling common ragweed Ambrosia artemisiifolia in Europe. He said, “Specifically, the aim of my PhD was to improve the predictability of the leaf beetle biocontrol agent by using demographic models for the insect.”

Ragweed plants are a common allergen affecting hay fever sufferers across the continent. The average cost of hay fever related diseases to the European economy is estimated at €4.5 billion a year due to treatment costs and lost time working. Since ragweed was first discovered in Europe in the 19th century, originally from North America, it has become widespread with hotspots in the Balkans, northern Italy, and the Rhône Valley in southeastern France.

Tackling this invasive weed is important for the health of Europe’s citizens and its economy. Coming up with a solution is therefore crucial.

Theo is from the Netherlands and was registered at the University of Bern in Switzerland for this PhD. He studied the effects of the invasive woody weed species’ Prosopis and Lantana on biodiversity and ecosystem services in Eastern Africa.

He said, “Prosopis (Prosopis juliflora) and Lantana (Lantana camara) are two American woody plants which are invasive throughout the Global South. Both species were introduced to provide benefits for people like fire wood, but they have escaped their plantations and now threaten local ecosystems and rural livelihoods.

Who did you work with?

Judith – “From CABI I was supervised by Dr. Tim Haye and Dr. Dirk Babendreier. The project was funded by the European Union’s Horizon 2020 research and innovation programme with the Marie Slodowska-Curie Innovative Training Network “Breeding Invertebrates for Next Generation BiOcontrol” (BINGO) that consists of 13 PhD students in seven European countries.

“Including BINGO partners, I collaborated with colleagues from the University of Groningen in the Netherlands, several universities in Italy, Agriculture and Agri-Food Canada, the United States Department of Agriculture (USDA), and the phytosanitary service in the Canton of Ticino in Switzerland during my PhD.”

Benno – “In Delémont I was supervised by Urs Schaffner. I did most of my fieldwork in northern Italy where I collaborated with colleagues from the University of Milano-Bicocca, and just returned from a four month research visit at Penn State University, USA, with Ottar Bjornstad.”

Theo – “During my PhD I was under the supervision of Dr. Urs Schaffner and Dr. René Eschen. I was part of the larger Woody Weeds project, a six year project that focuses on understanding the impacts of invasive woody plants and managing them in Eastern Africa. The Woody Weeds project consists of over 30 scientists, including eight PhD students, from five countries, and was funded by the Swiss National Science Foundation and the Swiss Development Corporation.

“During my PhD I worked together with scientists from several universities and research institutes in Ethiopia, Kenya and Tanzania, as well as the University of Stellenbosch, South Africa.”

Judith – “Having already defended my thesis in December 2018 and after three and a half years at the CABI Swiss centre, where I have felt very much at home, I now intend to continue working with insect biological control as a postdoc in North America.”

Benno – “Working at CABI has been a big adventure for me over the last four years. My project has seen me travelling a fair bit, with the centre providing the ideal base from which to do my research and learn from experts in the field. After CABI, I will spend the next six months at the Hebrew University of Jerusalem researching another Ambrosia species and a stem-galling moth.”

Theo –  “My PhD defense is in February, close to four years after I moved to Switzerland. During this time I had an excellent home away from home at CABI with a large group of friendly and like-minded people. After my PhD I will continue working on Prosopis when doing a postdoc at the Senckenberg Institute in Frankfurt am Main, Germany.”