The ‘Capacity building of small-scale potato growers in Punjab, Pakistan’ project – led by CABI and funded by the Netherlands Enterprise Agency (RVO) – is already ‘sowing the seeds’ of success for hundreds growing one of the province’s key crops.

Over 95% of potato production originates from Punjab and the crop is a significant commodity for both farmers and consumers. However, the productivity of the small-scale potato grower is affected by farmers’ approaches to farming practices and the way they tackle problems, such as pests and diseases.

The project – which is working in partnership with the Agriculture Extension Department, Punjab, the University of Agriculture, Faisalabad, the Pakistan Agriculture and Research Council (PARC) and Wageningen University & Research – has so far trained around 550 smallholder potato growers (including 100 women) on advanced potato production.

Twenty-four demonstration and seed quality plots have been established in addition to the extensive training of trainers and support given to farmers in terms of advanced potation production – aimed at strengthening the bond among key stakeholders along the whole potato value chain.

A complete package of training is being delivered – covering information from the aspects of seed sorting and grading as well as till harvesting.

In order to demonstrate advance potato production technology for the year (2022-2023), five demonstration plots for ware crop were established by district master trainers in the core potation producing areas of Punjab. This was inline with recommendations given by CABI and the Wageningen University & Research team.

The farmers were astonished by the seed treatment method adopted by the host farmers as it prevents several seed borne diseases. They also showed compassion to adopt these practices on their farm.

This year, the project expects to conduct intensive training for about 450 farmers – including 90 women – in the core potato growing areas of Punjab through practical demonstrations and extension materials developed in the local language.

Women also gained knowledge and skills on advance potato production practices. They also appreciated that such activities enhance their engagement at the various stages of the potato value chain and also improve their livelihoods.

Guest of honour, Dr Janny Vos, Partnerships Development Director at CABI, said, “Punjab has potential for good quality potato production due to favourable climatic and edaphic conditions. These advance potato production practices developed by CABI and the WUR team will help the small-scale potato growers to enhance their productivity and improve their livelihoods.”

She also advised the master trainers and the farmers involved to spread awareness to their fellow farmers in the local vicinity so that they can also adopt these recommended practices.

To ensure the close collaboration with the stakeholders, Her Excellency Henny Fokel de Vries, Ambassador of the Embassy of the Kingdom of the Netherlands to Pakistan, paid a visit to the University of Agriculture, Faisalabad (UAF).

The Ambassador said the Netherlands is the second largest exporter of the agriculture produce in the world. She further added that Pakistan imports 13,000 tons of seed potato from the Netherlands. Therefore, it is dire need to build capacity of smallholders on advance potato production to enhance their productivity and livelihoods.

She also appreciated the way project is getting progress and is keen to strengthen the bond among different project partners and also took questions from the audience on future collaboration between the Netherlands and Pakistan including opportunities for students.

Ambassador Fokel de Vries also had a detailed discussion with the female master trainers about the challenges they face as women engaged in the project activities and their learnings from them.

To achieve the objectives of the project, intensive training was conducted for 24 master trainers – eight of whom are women. A refresher session was conducted in Sahiwal, Punjab, to guide them about advanced potato practices.

They shared constraints faced by them in implementing the practices and strategies to overcome these issues.

Dr Ijaz Ashraf, Associate Professor, the University of Agriculture, Faisalabad, discussed the importance of communication skills and community development for the extension worker.

Meanwhile, Dr Ijaz Ul Hassan, Director of Potato Research Institute, Sahiwal, shared the achievements of their institute and the potato varieties developed by them. He also enlightened the trainers about the current potato production status of the country and the role of the Punjab province in it.

At the end of session, the team discussed a tentative schedule of the upcoming activities and develop a strategy for their successful implementation.

All stakeholders were satisfied with the results of the project activities previously conducted.

They ensured their support according to their role in the potato value chain regarding extension services. This is through the dissemination of extension material developed by the experts of CABI and WUR on advance potato production technology.

The partnership will also help to organize seminars, conferences and expos etc. to disseminate these interventions. The team also appreciated the efforts and support provided by the stakeholders in organizing the project activities and disseminating the interventions.

Read more about how CABI is helping to build the capacity of small-scale potato growers in Punjab, Pakistan, from the project page here.

Other relevant news stories and blogs 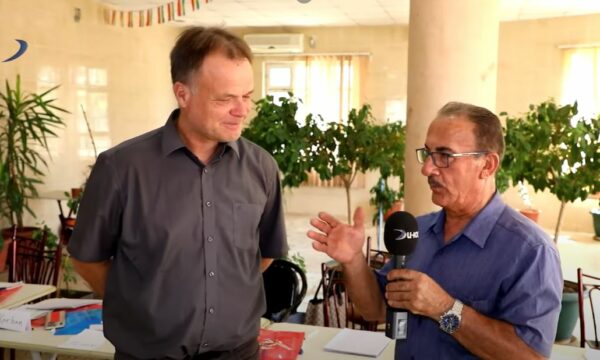