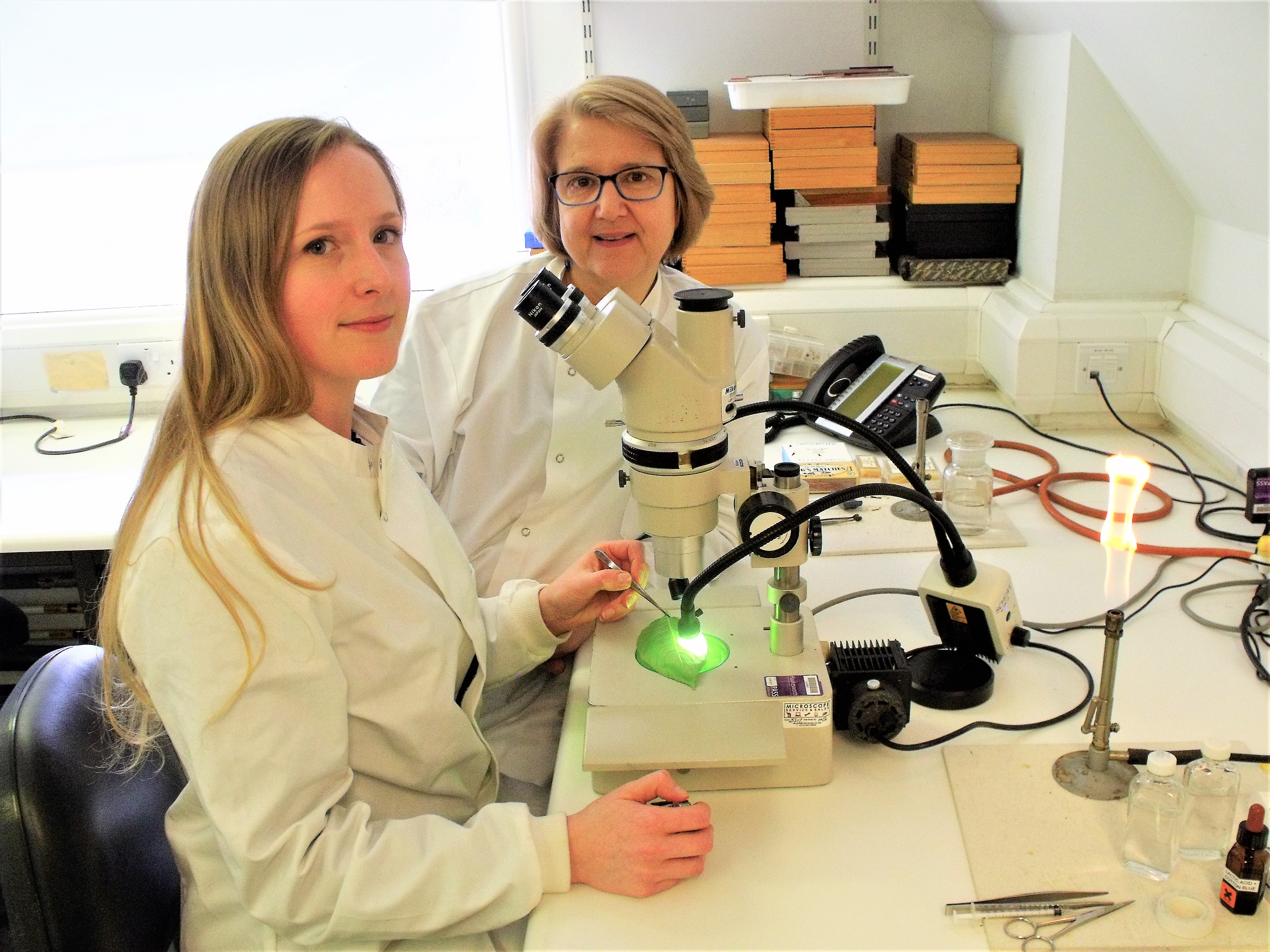 Meet the ‘sorcerer’ and her ‘apprentice’ Dr Carol Ellison, a plant pathologist at CABI, and Project Scientist and PhD student Suzy Wood who since 2011 has been learning her trade as an entomologist at CABI’s UK laboratories in Egham, Surrey.

Though Carol and Suzy practice different strands of biology, their fields of study do overlap when it comes to invasive weeds and their biological control and management.

Both share the common interest of Himalayan balsam and the need to biologically control what has become one of the UK’s most invasive weed species, colonising river banks, waste ground and damp woodlands. In fact, in 2017 Carol was only too pleased to see Suzy’s visionary educational display ‘Nature vs Invader’ at the Chelsea Flower Show – which looked at natural solutions to invasive plant problems, and displayed some of the UK’s most invasive alien weeds – win a gold medal.

Significantly,  they share CABI’s mission of helping farmers grow more and lose less and improving the resilience of natural ecosystems. The organisation uses its expertise to solve problems in agriculture and the environment to help meet the UN’s Sustainable Development Goals including ‘Zero Hunger’ and, perhaps more closely linked to their work, ‘Life on Land,’ where CABI helps conserve biodiversity and ecosystems, and improves the prevention and management of invasive species.

Carol, a Principal Scientist with over 30 years’ experience in plant pathology and invasive species management, represents the ‘older generation’ female scientist who started her career as a rarity amongst women who chose science as their profession. Suzy on the other hand symbolises the new wave of women scientists venturing into a field of study already paved – to some extent – by scientists like Carol and other women trying to make their mark at a time when science was dominated even more by their male counterparts.

But, as Suzy is part-supervised by Carol for elements of her project, have times changed to the extent to which women are now more equally represented in all sciences, let alone biological sciences? 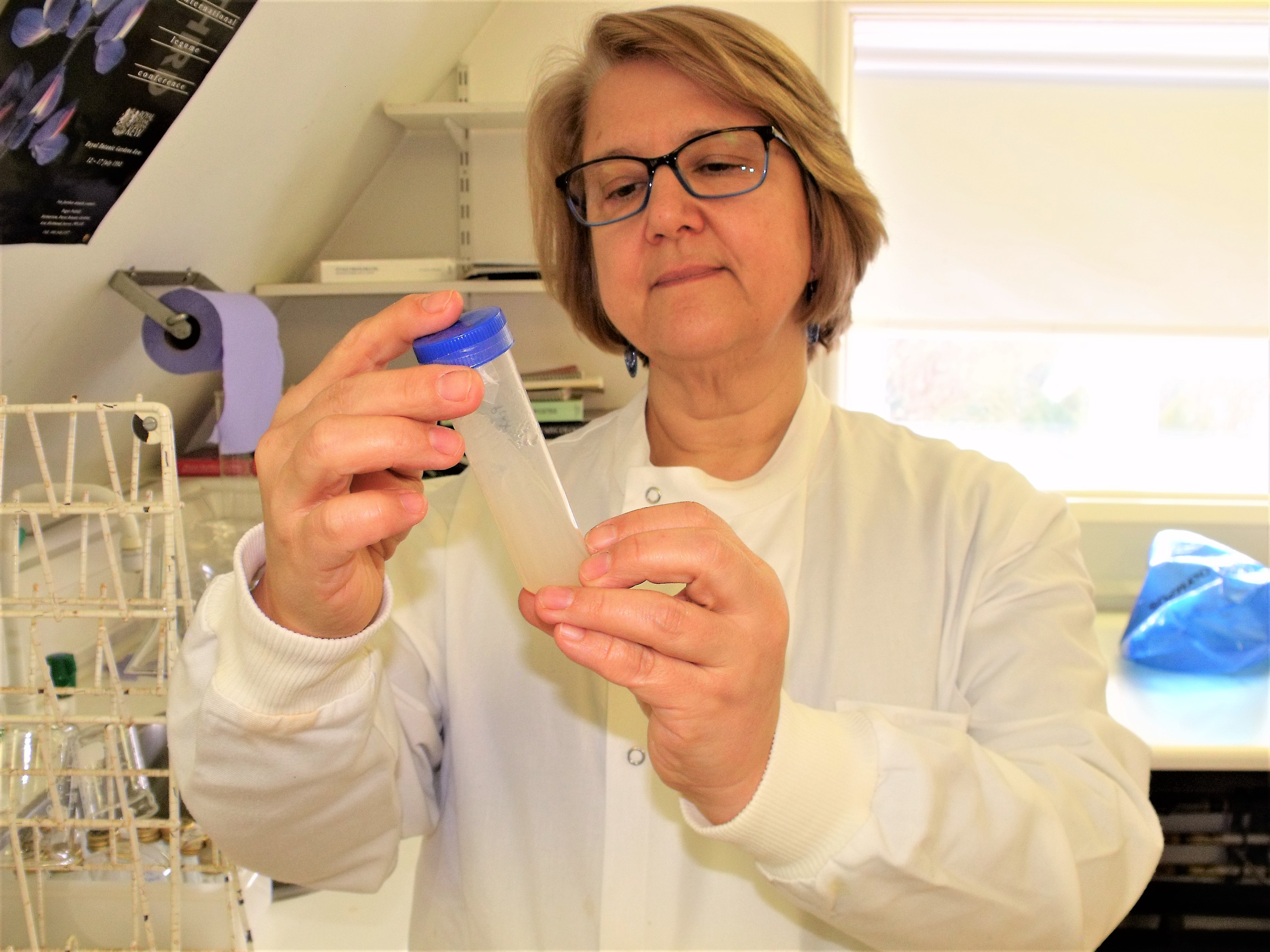 Carol, who has been the lead author or co-author of more than 60 papers in peer-reviewed journals, said, “When I started at CABI I might have been the only female scientist at the time, but in a way, this was to my advantage as CABI supported my career progression and I was fast tracked as part of their drive to increase female scientists in senior positions.

“I think Suzy is coming into science in a different era – not only where more and more women are starting to consider science as a career but also where they are making more breakthroughs in the field.

“The times that we are working in are different but I think the majority of women scientists share the common goal of wanting to do something important for the world – for me that includes helping farmers grow more so that they and their families can prosper and send their children to school.”

Carol says she remembers the time early in her career when she would regularly spend weeks at a time overseas in the field and would be uninterrupted by constant communication unlike today.

“We would go out and conduct our research uninterrupted by mobile phone calls, texts or emails. In some areas the landlines were so bad we just didn’t bother to communicate until we got back to the UK,” Carol said. “Now it seems we’re in constant contact. Not only that but we need to respect the principles of the Nagoya Protocol , which aims to create greater legal certainty and transparency for both providers and users of genetic resources. We can’t just bring back insects or pathogens from a country in our luggage, for identification, by taxonomists and further study. We have to obtain export permits prior to surveying, from the respective countries.” 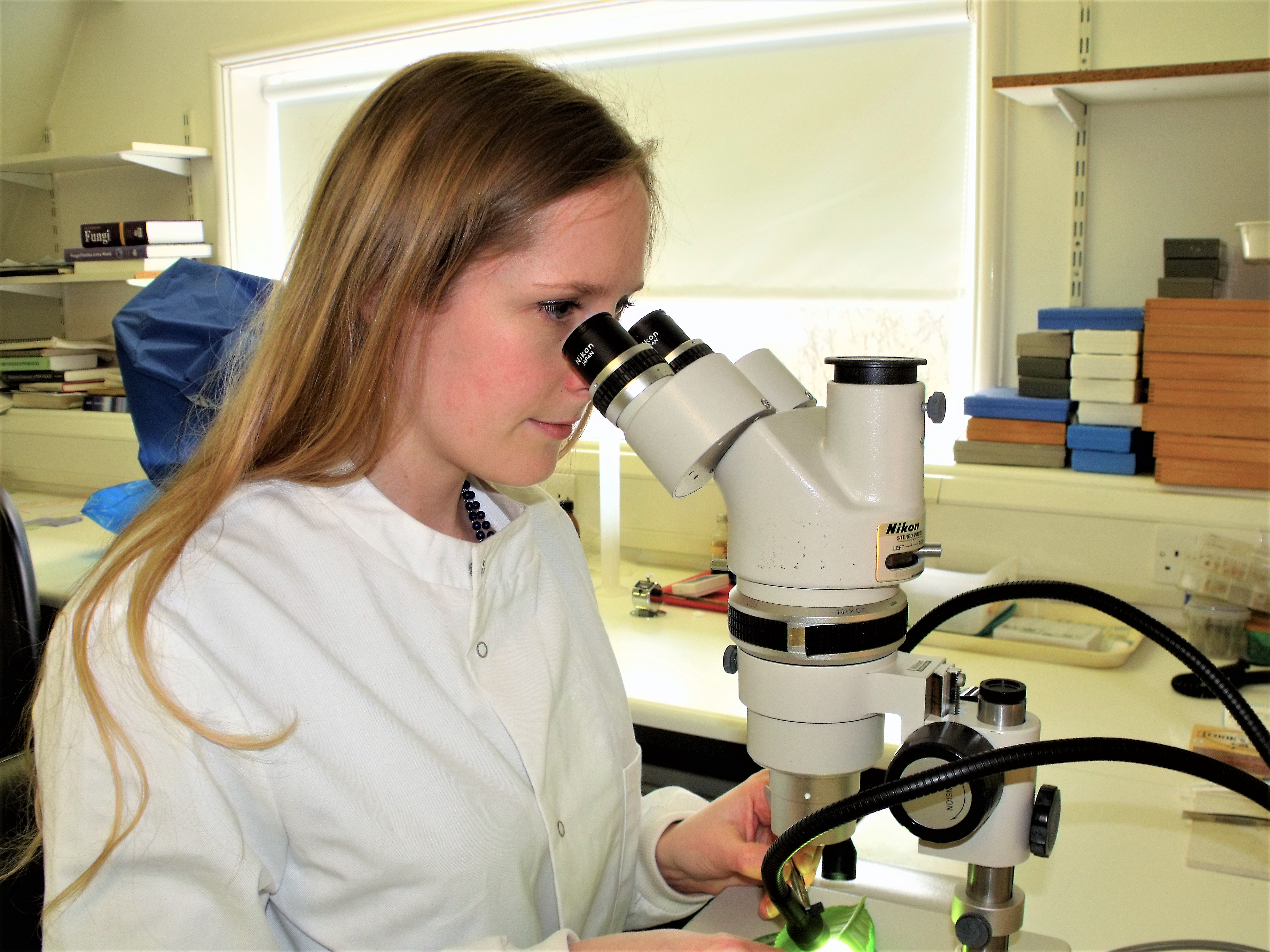 Suzy inspects a plant leaf for signs of disease

Suzy, who came to CABI in 2011 as a Project Scientist concerned with invasive species management with a First Class Degree in Biology from the University of York, said her passion for plant science stems from her mother and grandparents being keen gardeners and that she would often help in the greenhouse during long hot summer days.

She said, “I was always interested in anything to do with nature and my family encouraged me with their love of gardening and the outdoors. I also developed an interest in plant biology at school and followed this through to university.

“I think another difference between now and when Carol first started her career is that people these days seem to be more aware of environmental issues and feel a shared responsibility for the impact we all have on our planet.

“We have to work together to find more natural ways to control the invasive species that impact on our lives, so that in turn we have more sustainable management of our environments and habitats.”

Carol added, “I agree with Suzy. It’s all about finding the right biological control agents and releasing them to reduce the impact of harmful weeds while being mindful of biodiversity and the resilience of local ecosystems. Ultimately we want to see the environment protected and crops thrive so farmers and their families can flourish using sustainable approaches that protect our planet.”

Read more about how CABI’s Nature vs Invader exhibit won gold at Chelsea.

You can find out more about Dr Carol Ellison’s project investigating the biological control of Himalayan balsam which is what Suzy’s PhD is also based on.