In support of SDG5: Gender Equality, CABI ensures that a gender lens is applied in all of our work.

CABI’s goal is to create opportunities for women in agriculture by investing in inclusive economic growth. Our work encourages more food production and trade, while considering how women can share the benefits of growth.

This year we welcomed a new Gender Coordinator, Sajila Khan. She is based at CABI’s centre in Pakistan.

Sajila was born and raised in Swat, Khyber Pakhtunkhwa, Pakistan. She has a Master’s degree in Public Administration from Peshawar University, Pakistan, and in Sociology from Warwick University in the United Kingdom.

Sajila has over 21 years of work experience in academic, non-governmental and international organizations, UN Agencies, including work with communities in conflict and post-conflict situations and natural calamities. During this time, Sajila says she had the “privilege of acquiring a wide range of experience in diverse settings and situations.”

Here we get to know a little more about Sajila. She tells us why a gender lens is so important to CABI’s work.

What motivated you to work in development?

I grew up in a rural setting where I saw many women deprived of their rights and resources. I was one of the privileged ones to get my schooling and go to university. I always wanted to get into a profession where I could work closely with grassroots-level women and become their voice.

What has been your biggest achievement so far?

Professionally, I worked very hard to reach higher positions. I have implemented flagship projects, contributed to policy drafting for domestic and home-based workers.

Personally, my biggest achievement is having raised two good human beings. Seeing them well-educated and settled.

Have you faced any barriers in your career, how have you overcome them?

As a woman in Pakistan, I have had to work extremely hard to receive an education and achieve a professional identity.

In our culture, young women are supposed to marry early and get settled. I was lucky that I was able to do my masters before getting married. Working before marriage is not considered good in many families. However, over time, a lot of change and acceptance has come towards young women working and pursuing their career before marriage.

I have been fortunate to have had the opportunity of working in organizations at the grassroots as well as at policy levels. I have sadly, also been at the receiving end of conflict during the militancy and displacement of my family and the wider communities in Swat in 2009. However, I can say with both pride and humility that these life and professional experiences have made me a stronger person, professionally as well as in inter-personal relationships.

What do you like most about working at CABI?

I have joined CABI very recently and I have found it to be a very supportive environment. My colleagues are very helpful. So far, I have connected to many forums, globally, which provides you a learning opportunity and exposure.

Why is a gender lens so important for CABI’s work?

What are some of the biggest changes you’ve seen for women over the last 10 years?

If I talk about my part of the world, Pakistan, the awareness of girls’ education and pursuing a career has increased, though a lot more still has to be done in these sectors. Women and young girls are more aware of their rights especially in urban and semi-urban environments. This also includes some pockets of rural areas. The credit goes to technology such as mobile phones, TV and radio.

When I was at school, I wanted to go aboard for higher education like my older brother who was studying in the UK. But my parents did not allow me. It was not because they did not want me to get a higher education but girls going out of the country alone was not considered good. Now, a lot has changed. You will find many rural families now allowing their daughters to go for their higher education in big cities. Many young women are working in big cities too.

What are the biggest challenges facing rural women right now?

Women comprise approximately half of the total population of Pakistan. The majority of women live in rural areas, mainly engaged in farming, livestock management, and fisheries. Mostly as unpaid contributing family workers or on low wages. They have less access to technologies, to public services (health, education, training and transport) and little, if any, social protection.

While women work on smaller farms, earning lower wages as seasonal hands than male counterparts, and earning less from their livestock, they experience greater workloads. This includes reproductive work, fetching water and fuel, and care work. Yet they own less land and have inadequate access to agricultural inputs (seeds, fertilizers or labour-saving machines and equipment.) Plus, their right to property is often challenged. Even when they own property they may not control it.

Agriculture is the largest employer of Pakistani women workers. Agricultural work is undergoing feminization but women’s work remains largely unrecognized, underpaid or unpaid. Women work in agriculture mostly out of need and often without choice. Law, policy and activism need to address the rights and wellbeing of women agricultural workers.

Which women inspire you?

My mother. She was an inspiration for all of us, as well as other women living in our community. She started the Presentation Convent Swat in 1960 along with the daughter-in-law of the Wali (Head) of Swat state. She worked very hard and personally went to the notable families to encourage them to admit their daughters in the school. She herself admitted my older sister in the school. She did this as a way of gaining the confidence of other notable families to do the same for their daughters. Belonging to a respectable family prompted many other families to follow suit. And since then, many girls have received the best schooling to date, enabling them to go for their higher education.

She transferred her skills such as sewing, knitting and embroidery work among the rural women of our area. And connected them to bigger markets.

What advice would you give to women and girls thinking of pursuing a career in development?

Firstly, to have confidence in themselves and in their abilities.

Secondly, to start small. Start from the grassroots level and then build upon it by further education and experience. Field experience, by far, is the most important skill to acquire and working with grassroots communities is the best way to achieve it. By doing so, you gain invaluable knowledge from within the community, building an understanding of cultural sensitivities.

Only by interacting and working in close quarters with these communities will you gain an understanding of their inner workings and core issues.

Find out more about CABI’s work in gender and youth

Read more: “Gender mainstreaming is important because both men and women have equal rights to have their voices heard”

Women play a key role in agriculture in Pakistan that has not always been acknowledged. They are mostly deprived of access to information, knowledge and skills enhancement. This leads to poor technical skills with minimum wage employment, no recognitio… 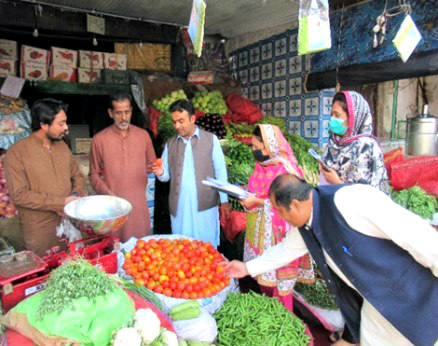