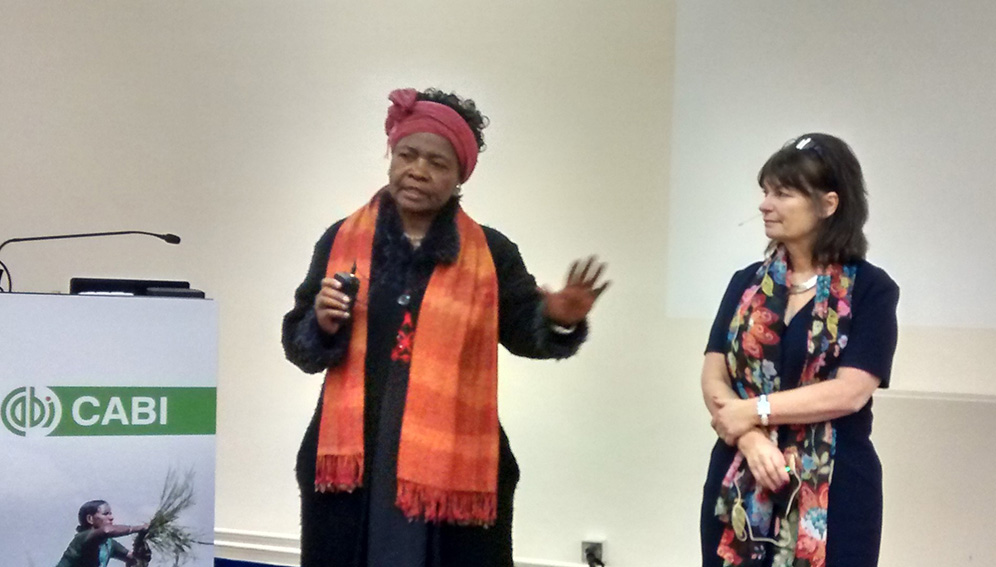 To mark the forthcoming UN’s International Day of Women and Girls in Science  (11 February 2019), we look at a recent story covered by SciDev.Net in which CABI board members Professors Ruth Oniang’o and Anne Glover argue that women should challenge traditional power structures and ask for more transparency to get ahead in science and other fields in the workplace.

In this article, by Inga Vesper, Professors Oniang’o and Glover also reveal how to overcame barriers before achieving successful careers in male-dominated environments.

Prejudices are everywhere—yet most of us think that we, of course, are not subject to them. We believe we are better than that, we can look beyond a person’s skin colour, religion or gender.

A talk on gender in the work place at the Centre for Agriculture and Bioscience International (CABI) in Wallingford, United Kingdom, the parent organisation of SciDev.Net, showed that this is not the case. Professor Dame Anne Glover, a microbiologist at the University of Strathclyde and CABI board member, asked the multi-cultural audience of highly educated men and women what words they associated with the terms “boy” or “girl”.

A digital vote showed that the most common word people thought of when they thought of boys was “strong”. For girls, it was “pretty”.

These prejudices follow women everywhere, including in the work place. That’s why Glover and Ruth Oniang’o, also a CABI board member and professor of food science at the University of Nairobi, urged women to pay attention to the power structures around them.

“It is really important to understand subconscious bias in the work environment and be aware of the prejudices that are there,” Professor Glover said. “You need to find out how decisions are made – men do not always deliberately exclude women, but the traditional power structures were built for them.”

Professor Glover gave an example of how she was overlooked for a position on her then-university’s finance committee, as the decision to fill the post was made during an informal chat between two male committee members in the bathroom. However, Professor Glover added it was important to put oneself forward for leadership positions and challenge such power structures. In response to missing out on the committee post, she urged the university to advertise all such positions officially, which solved the problem.

“If you assume a victim mentality, you will not persevere,” she told the audience.

Professor Oniang’o faced different challenges in her career path. Even as a child, when she excelled at maths in school, she had to defend herself from the boys in her class, who could not accept her success. When the boys followed her after school and taunted her, she climbed a tree and threw stones at them.

“I was beating them in class, and I had to beat them physically on the way home,” she says.

Professor Ruth Oniang’o talks about being bullied by boys in her class after excelling at maths.

Professor Oniang’o drew attention to the fact that many women face additional burden on top of gender prejudices, such as caring for family members and children. She pointed out that this makes it necessary for women to always think of several things at once—kids, husbands, household duties, their appearance—which can dig away at their self-confidence.

“Women always question themselves and their worth,” she said. “This even impacts their appearance and their demeanour. But men never act like anything is wrong.”

This blog is based upon an article ‘Women need to understand power structures’  which originally appeared in SciDev.Net