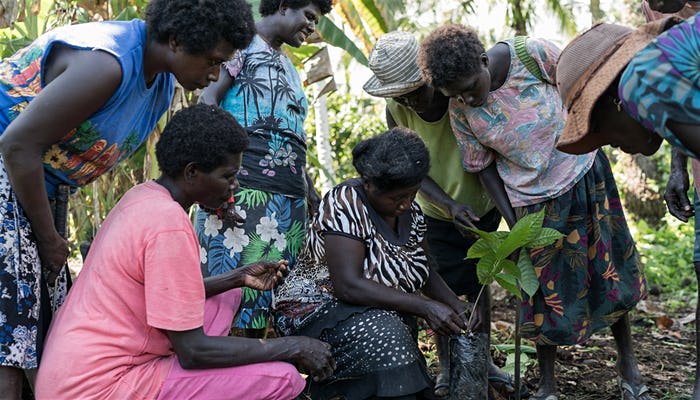 PNG is benefiting from integrated pest and disease management strategies that are reducing incidences of cocoa pod borer and ensuring profitable cocoa crops.

More than 150,000 households in PNG depend on cocoa for their livelihoods. Families and communities rely on the income generated from their cocoa crops to buy food, making it an important industry for the nation’s food security.

The cocoa pod borer is a prolific pest that can destroy cocoa crops quickly. It arrived in PNG in 2006 to devastating effect. Since then, several ACIAR projects have focused on how integrated pest and disease management strategies can be deployed to ensure this pest has minimal impact on cocoa yields and doesn’t impact the livelihoods of smallholder farmers.

One project on improved management strategies for cocoa in PNG was led by the University of Sydney in collaboration with the PNG Cocoa and Coconut Institute and The Centre for Agriculture and Biosciences International (CABI).

Professor David Guest from the University of Sydney explains that improving cocoa production in PNG relies on a participatory training and extension approach.

‘By the 1990s most of PNG’s cocoa producers were smallholders who weren’t actively looking after their cocoa crops and big problems started to emerge with pests and diseases, particularly when cocoa pod borer arrived in 2006.’

Eradication of cocoa pod borer is difficult, so the best strategy is for farmers to use a combination of techniques under integrated pest and disease management to lower infestation levels.

‘Traditionally farmers hadn’t had to worry about their cocoa crops and had treated them almost like ATMs. They would harvest their cocoa pods only when they needed cash but otherwise left them alone. We started by asking smallholder farmers what they wanted to know and then trained them in how to manage their crops to limit cocoa pod borer incursions.’ 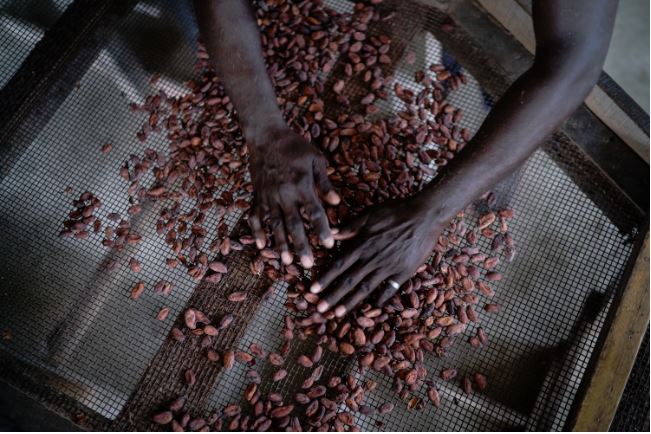 A cocoa buyer sifts through beans in a seller’s bag. Image: Conor Ashleigh

‘There are huge opportunities for cocoa production in Papua New Guinea,’ says Professor Guest. ‘For now, around 70% of the world’s cocoa comes from West Africa but, as new markets for chocolate open up in China and India, there is room to expand cocoa production in South-East Asia and the Pacific. The climate and soils in areas of PNG are well suited to producing high-quality cocoa beans with a particular flavour and there is definitely potential to increase annual production rates.’

He says, ‘The work being done on cocoa production in PNG is vital and is having positive impacts. Through the research projects conducted with ACIAR over many years we have moved from simply controlling a disease to working on how to make cocoa an industry that is viable, sustainable and profitable for the country.’
The cocoa pod borer management strategies piloted in PNG have been integrated into the World Bank–funded PNG Productive Partnerships in Agriculture project.

Professor Guest is continuing his work in PNG, enhancing cocoa production with a current ACIAR project in the autonomous region of Bougainville that is focused on developing the cocoa value chain and improving profitability for smallholder cocoa farming families and communities. This project has included establishing the Bougainville Chocolate Festival to promote the industry internationally and led to chocolate made from Bougainville beans winning awards in Perth, London, New York and Paris.