PRMP in Pakistan: perspectives of government officials of Balochistan 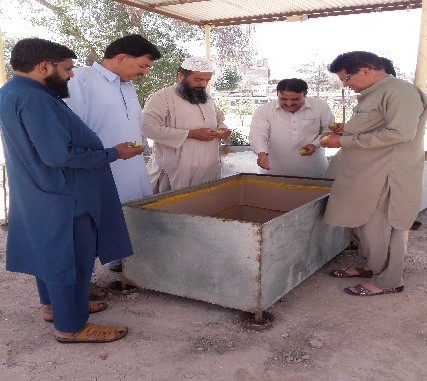 A Phytosanitary Risk Management Program (PRMP) in Pakistan is implementing a biological control program for pests of concerns in the Sindh, Gilgit and Skardu regions –  with the aim of helping farmers grow more and lose less to invasive species.

The PRMP Quetta team is continuously rearing thousands of BCAs in their laboratory on  and so far around 1.8 million BCAs of apple codling moth have been dispersed amongst apple growers in Balochistan. The farmers are continuing the release of BCAs, which benefits them in controlling and drastically reducing damage caused by the pests to their crop.

Similarly, 3.1 million BCAs of apple spider mites have been shared with apple growers for releasing at their orchards. The team are working endlessly to improve their interventions. This includes the development of rearing technologies for the mass production of BCAs, which has benefitted the national system in supporting biological controls.

To observe PRMP activities in Balochistan, the PRMP team invited government dignitaries to witness the success of the project interventions in Balochistan. The Secretary of Agriculture and Cooperative Department, Balochistan, and the Director General, Agriculture Research, took a strong interest in hearing appreciatory remarks from farmers on the successes of the project interventions in the region.

They took the opportunity to visit farmers to see first hand the successes of the project interventions and also played a role in propagating biological controls by releasing BCAs and fixing predatory mites packets in apple orchards.

A frequent visitor to the PRMP Biological Control Laboratory, the Director Plant Protection, ARI Quetta, appreciated the development of rearing technology at the facility and continues to motivate the laboratory staff in developing further technologies with special reference to the biological control of pests of apple crop. 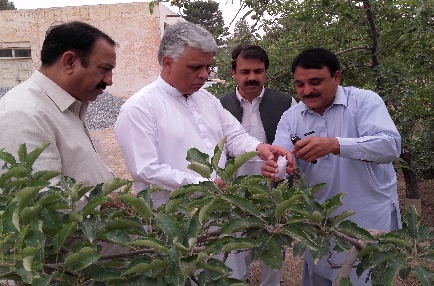 The mass rearing technologies developed by the PRMP Quetta team have become the ‘talk of the town’ for aspiring scientists and the laboratory is constantly being visited by students who are interested to find out more about the facilities and the work conducted there.

Recently agriculture officers from Balochistan were guests to the laboratory where they were briefed on the ongoing research and developmental activities in the laboratory. They also took the opportunity to see the rearing technologies. The agriculture officers lauded the research activities undertaken at the facility and promised to implement the biological control technologies at their field locations.

The efforts of the PRMP Quetta team have been appreciated at all forums. The team are untiringly organising multiple training sessions on the apple codling moth and mites – focussing on all aspects of biological control. The team aims to continue to inspire young scientists and instil the concept of biological control in farmers, which will greatly improve the livelihoods of their future generations to come.

The Phytosanitary Risk Management Programme (PRMP) in Pakistan is funded by USAID via the United States Department of Agriculture (USDA). Find out more from the project page on CABI.org