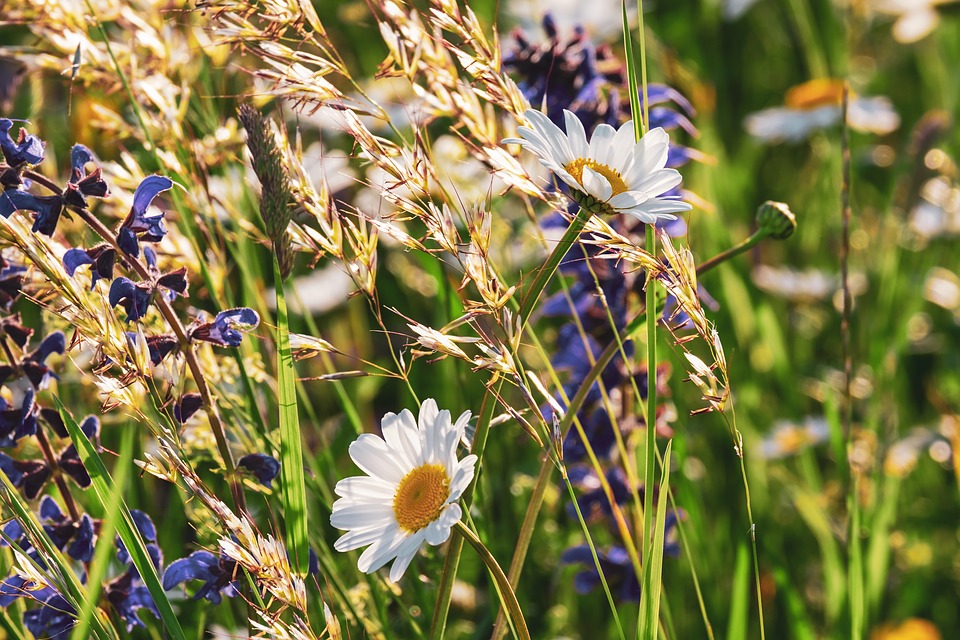 British wildflower meadows are a hive of biological diversity but have largely been lost due to conversion to agriculture. CC0 Couleur via Pixabay

National meadows day is an annual awareness event focussed around the first Saturday of July, but up and down the country activities took over the whole weekend. Traditionally managed British meadows are characterised by low soil fertility and actively managed cutting or grazing, supporting a range of colourful flowering species including the oxeye daisies seen in the picture above. These species rich meadows, which used to cover much of England’s countryside, were traditionally generated by farmers managing for hay and pasture. Ironically these important habitats have now largely been eradicated by modern agriculture. In recognition of this fact there are now numerous conservation projects and financial incentives in place to encourage the maintenance and regeneration of British Meadows. But with so many environmental schemes and species vying for position in British conservation why are meadows so important and how can agriculture help?

Well the main answer is their ecological importance; Meadows support more conservation priority species than any other habitat type. British meadows and grasslands are made up of >400 species (27% of the British flora). Of this more than 25% are threatened with, or on the brink of, extinction. This includes our rarest plant, the lady’s slipper orchid, of which there is only 1 native left. Meadow grasslands also support a wide diversity of pollinating insects, most notably butterflies and bees, which have been in continued decline in the UK for some years now. Wildflower grasslands are also home to a range of small mammals, fungi, birds, bats and reptiles. Apart from harbouring a wealth of biological diversity, species rich meadows are also capable of storing more carbon than low-diversity meadows and help to prevent flooding by better retention of nitrates and rainwater.

Secondly is their concerning rarity; in less than a century 97% of species-rich grassland has been lost. This initially began during the Second World War when lot of areas were converted to agricultural usage. The areas left now are few and far between, making them highly vulnerable to further shrinkage.

Recognising that agricultural expansion has been the major cause of much of this loss there are now numerous schemes designed to encourage farmers to manage, restore and create new wildflower meadows on their land. One of these initiatives is the Countryside Stewardship Higher and Mid-Tier grants provided by Natural England. The scheme includes advice and guidance on maintenance of grassland that has been produced from a 20-year long research programme. Within these grants, habitats are ranked by perceived value and amongst many others, meadow areas represent some of the highest valued habitats per ha.

Another reason for declines in wildflower grasslands has been poor management; soil fertility, species selection and grazing regimes all need to be carefully controlled in order to effectively maintain meadow areas. In order to ensure appropriate management for the restoration and establishment of meadows, there are numerous community schemes which seek to work with farmers and stakeholders. For instance, ‘Hay Time’ by the Yorkshire Dales Millennium Trust has led to the restoration of 717 hectares of degraded meadows since 2006 by working with farmers and partners. A more national project, Coronation meadows, is a celebration of the Queens 60th anniversary as monarch, which has sought to create at least one new wildflower meadow in each county across Great Britain, using seeds from nearby areas to ensure local character.

British conservation charity Plantlife International has been actively campaigning for the protection and creation of species rich meadows, calling on the government to restore 120,000 ha of species rich grasslands by 2043. They are also advocating for increased protection of the remaining meadows to the degree to which ancient woodland has been protected.

In its blog post for National Meadows Day 2018, a Defra spokesperson said: “We have committed to developing a Nature Recovery Network to protect and restore wildlife in our 25 Year Environment Plan. We are keen to work with Plantlife and other partners as we develop more detailed plans for expanding and connecting grassland habitats and to explore how we can more effectively share data to strengthen our inventories.”. Natural England has also released a blog post on how to create a wildflower meadow and the support available for farmers and land managers.

If you would like to see a meadow in flower this year, the magnificent meadows website boasts a map of local meadows and a list of all activities registered as part of the event. Plantlife has also suggested some activities to engage with meadows including: butterfly and moth spotting, counting orchids and attending expert talks. To read more about on-going projects and how you can get involved follow the links below:

First held in 1974, World Environment Day (WED) is considered to be the largest global event for positive environmental action, with participation from over 143 countries.  It takes place on 5th June each ye…