Stepping out in the countryside – how much is it worth? 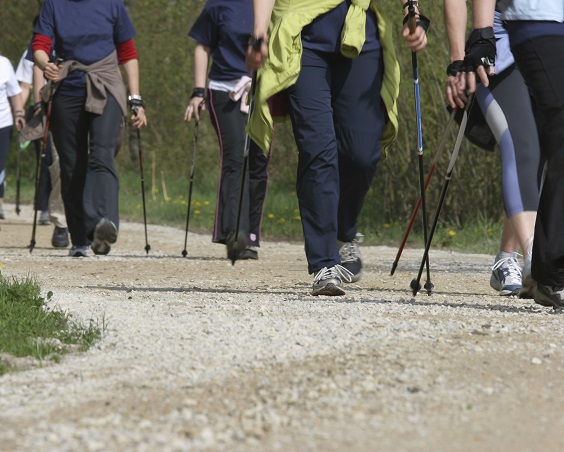 Staff at the CABI HQ in Wallingford this week are making an extra effort to get up from their desks to walk around the building, and the surrounding paths and lanes may be seeing more groups of people than usual out for lunchtime walks. This is all down to a ‘wellness’ campaign in which pedometers have been made available to staff in exchange for a small charity donation, with those obtaining them recording their steps during the working week to meet a group target of one million steps. Also occurring this September is a national fundraising ‘Stepember’ campaign for the disability charity Scope, where participants are challenged to clock up 10,000 steps a day. Here at CABI we are fortunate to be in an area where lunchtime walks can take in fields, woods, and even the banks of the River Thames, making outdoor exercise a much more appealing idea than walking around an urban block. Thus it was timely today to read a story carried on various news outlets about the value of natural environments for health, when the benefits of exercise carried out in parks, woods and other open areas are converted to monetary value. The study by the University of Exeter and Public Health England, published ahead of print on the Preventive Health journal website, estimates that so-called ‘green exercise’ provides health benefits worth £2.2 billion a year to adults in England.

Researchers analysed data from the world's largest study on recreational visits to natural places, the nationally representative, Monitor of Engagement with the Natural Environment survey. This survey by Natural England has more than 280,000 participants and has been running for the last six years. The survey outcomes are part of England's official national statistics and people are sampled each week of the year, and in every region of the country, to reduce seasonal and geographical biases.

The researchers examined active visits to locations such as parks, woods and beaches. Green exercise was defined in the study as nature-based activities of moderate to vigorous intensity and lasting more than 30 minutes. Examples included dog walking, running, horse riding, outdoor swimming and mountain biking.

Because physical activity needs to be regular and sustained to benefit health, the team focused on those who reported regularly meeting Government guidelines for physical activity of five 30 minute sessions each week. The researchers then worked out what proportion of these people's weekly physical activity took place in natural settings and estimated the benefits to health associated with their levels of green exercise if sustained across the year.

Of the 8.23 million adults who had made at least one ‘active visit’ of 30 minutes or more to natural environments in the week prior to the survey, an estimated 3.20 million also reported meeting recommended physical activity guidelines fully or partly through such visits. Active visits by this group were converted into Quality Adjusted Life Years, which were given an estimated social value of £20,000.

Dr Mathew White, who is the lead author of the research, said: "We've known for a long time that regular physical activity is good for health and reduces the burden on health services. We have now worked out approximately how much physical activity regularly takes place in England's natural environments and how much this benefits adult health across the population.”

Dr Angie Bone, of Public Health England and a co-author of the work, outlined some of the broader implications of the findings.

"Our parks, gardens, coasts and countryside play a vital role in improving health in this country, inspiring millions of us to get active outdoors every year," she said.

"Evidence suggests that access to good quality green space is linked to feeling healthier, a lower body mass index and decreased levels of obesity, and improved mental health and wellbeing. This research highlights the positive impact getting outdoors has on our health, emphasising the importance of both promoting exercise outdoors to a wider population and maintaining the quality and accessibility of the nation's parks and wild places."

The authors caution that green exercise is not the only way to achieve physical activity targets, and the study does not look at people who use gyms and health centres for their exercise routines. But among the advantages of exercise in natural settings are that it is free, and provides a less intimidating setting than a gym for those with poor self esteem associated, for example, with weight issues. It is also more enjoyable to exercise in pleasant surroundings, making it more likely that those with access to natural areas will sustain their activity levels.

Looking at related research on the Leisure Tourism internet resource (featuring the sport, leisure, recreation and tourism subset of CAB Abstracts), much of the work on green exercise as compared with activity in other environments focuses on the mental health benefits. Pretty et al. (2007) found that green exercise led to a significant improvement in self-esteem and total mood disturbance. Mackay and Neill (2010) reported that green exercise effected moderate short-term reductions in anxiety, with greater reductions evident for some exercise groups and for participants who perceived themselves to be exercising in more natural environments. Gladwell et al. (2016) suggest that lunchtime walks in nature-based environments may be more restorative than equivalent walks in built environments. Marselle et al. (2013) found that compared to group walks in urban environments, group walks in farmland were significantly associated with less perceived stress and negative affect, and greater mental well-being.

Turning to other health benefits, Grazuleviciene et al. (2015) report that walking in a park had a greater positive effect on coronary artery disease (CAD) patients' cardiac function than walking in an urban environment, suggesting that rehabilitation through walking in green environments after coronary events should be encouraged.

So it looks like we would all benefit from stepping out in our nearby parks or countryside, even when the month of ‘Stepember’ is over!

Keswick, Lake District National Park. Image from Pixabay National Parks Week is an annual festival championing what is special about national parks in the UK. This year’s festival takes place Sunday 22 to Sunday 29 July and aims to publicise how people…