Migrants fleeing conflict: a trial run for mass-migration due to climate change 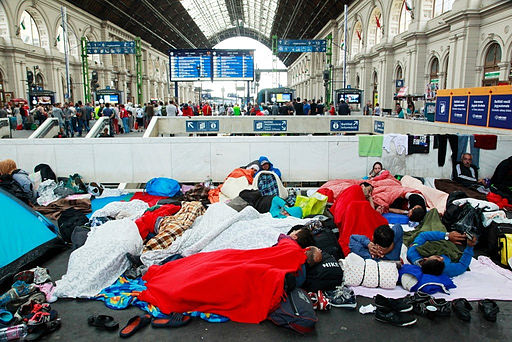 AS I write this I have a sense of déjà vu.
Public health professionals as far back as the 6th ECTMIH conference [2009], which I attended, recognised that very little was being done in Europe to address mass migration (at that time from Sub-Saharan Africa). Travel medicine specialists were refocusing their research onto migration and asking why this was not being reflected in travel medicine text books and journals.

“Does anyone ever ask if migrants suffer from diarrhoea?” asked Manuel Corachan [CRESIB, Spain], one of the plenary lecturers at the conference.

At that time, Italy (conference host) was bearing the brunt of illegal migration. The conference debated the needs of illegal migrants to Italy, the importance to public health in the host country of giving them access to health services and of having an awareness of disease prevalence & cultural attitudes in the migrant’s home country.  In 2011, the  organisers of ECTMIH , the Federation of European Societies for Tropical Medicine and International Health (FESTMIH) devoted the entire conference to “global change, migration & health”.

But this foresight was not just ethically driven, it was in expectation of mass migration into Europe due to climate change.

What we are now seeing, less than 6 years later, headlining our daily news and social media is a trial run for what is to come. What was previously perceived as a problem arising out of climate change has hit the EU earlier than might have been anticipated because of people fleeing conflict and dictatorship.

The numbers feel overwhelming, as we see wave after wave of humanity (mainly families) trek across Europe and across our screens, but in reality 95% of Syrian refugees are in Lebanon and Syria.

There are nearly 60 million forcibly displaced people across the world; nearly 20 million refugees and 86% of them [UNHCR end2014 figures] are hosted in poor countries.  UN agencies such as World Food Programme,  UNICEF and the refugee agency (UNHCR) are struggling to provide food & water, shelter & sanitation to Syrians in camps in Jordan, Lebanon (where 1 in 4 of the population are refugees), Iraq and Turkey. Most of those who make it to Europe are middle class and educated: they had the money to finance their escape.

A similar though not so televisual crisis is happening to Indonesia.

What we need is compassion for the refugees. And with that compassion can accrue economic benefits to western countries with an ageing population (such as Germany). We must drive our governments to cooperate; to step up to the plate and provide a proper, more strategic plan. Whatever changes and lessons we all learn (governments, public health professionals and the public) in handling this crisis will stand us in good stead for the future as the water levels rise and even more substantial numbers make the move across the planet.

CABI’s Global Health database has 6700 records on the health issues of refugees and migrants displaced through conflict.

Learn more by signing up to Global Health Knowledge base updates for free at: http://cabiblog.typepad.com/globalhealth/subscribe

This month, September, unsurprisingly the topic is Migration: the public health angle.

Breaking:Denmark Stops All Trains From Germany Amid Refugee Crisis

Germany May Deploy 4,000 Troops to Assist in Refugee Crisis on Weekend

Europe's Migrant Crisis – At A Glance

They are refugees, not migrants: By Jay Manoj Sanklecha | Islamic News Daily

Lessons for dealing with today's migrant crisis from the last one