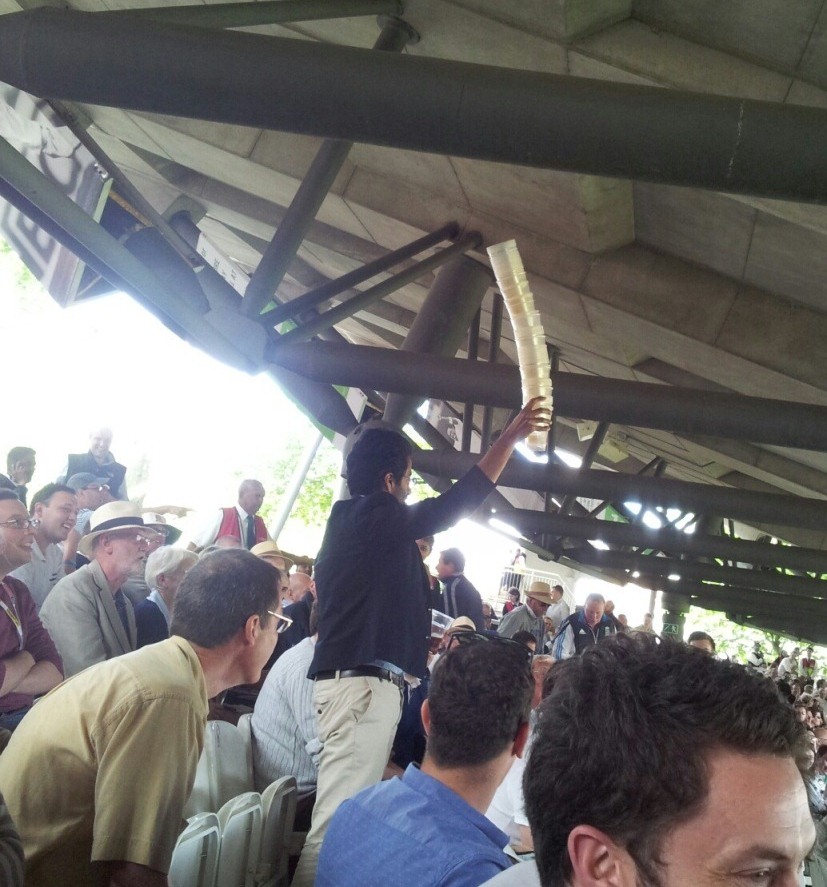 We went to Lord’s cricket ground to see England play Sri Lanka recently [14/6/14]. In our Lower Compton stand, the cricket was incidental to the main sport of drinking & talking. When did cricket at Lord’s get like this? Apparently at least since 2011 according to The Guardian’s Barney Ronay:  Sozzled – how English cricket got lost in drink

Our enjoyment was marred by the constant hubbub and noise: you could not hear bat on ball.

A group of young men in front of us, with one prime instigator (who somehow never got caught), in great good humour started a “feed the snake”… plastic beer cups were collected into one stack or beer tower and passed through the stand to be added to, while particpants shouted “feed the snake”. Great cheers would start up from the crowded stand – nothing to do with what was happening on the pitch – but because of these precarious beer towers.  For me, it was amusing only the once: repetitions were distracting and required constant security intervention.

What hit me from the beer towers was how many beers our stand had clearly been through between 11am and 2pm. Aided no doubt by the cardboard drinks holders enabling people to carry at least four pints in one hand. And not just beer… 4 lads behind us went through 3 bottles of champagne in the afternoon’s play.

Who was in the stand? All ages, but our stand was particularly full of young people (mostly lads) in their mid-twenties, good humouredly drinking themselves silly but not aggressive. Just silly enough to lose a sense of proportion and consideration for others in the stand.

Most of the drink on the day was bought at the venue, and there was plenty of advertising sponsorship linked to alcohol. The UK government’s minimum pricing for different drinks (April 6, 2014) to stop extreme discounting of alcohol in England and Wales, wouldn’t have helped at Lords.

Back at work I decided to investigate the health facts behind the “drinking culture” amongst young people and in particular young sports fans.

These are the facts:

From the HPA New Zealand Alcohol-You.
“Children and young adults are more vulnerable to negative impacts of alcohol on memory and learning, as the brain is still developing up until the 20s.Young people up to the age of 25 years are at a higher risk of harm from alcohol use than older adults. This is because young adults have the greatest risk of injury and accidents related to alcohol use, an increased risk of alcohol dependence and a lower tolerance to alcohol than older adults. Other harms that affect young people more than adults include unprotected and unwanted sex, assault, arrests, and harmful effects on social life, finances or work/study.”

Worldwide, up to 40% of the burden of alcohol problems are acute, with greater proportions in countries, such as the UK, which drink to excess (binge drink) more frequently.

Acute events include alcohol-related accidents and injuries, suicides and violent crime. In 2008, 44% of victims of violence in England and Wales believed their attacker to be under the influence of alcohol, and it was a factor in at least half of all domestic violence incidents.

An article in the Huffington post brought together the latest research on the long-term effects of binge drinking, including:

Pathways to Alcohol-Induced Brain Impairment in Young People: A Review. This review focuses on neurobiological markers that are associated with alcohol misuse in young people (13-24 years of age). It links binge drinking to brain deficits, indicated by changes in neurobiological markers, which if allowed to progress, will have negative effects on your brain later on in life, hampering adherence to treatment, and poor outcome in health.

And this one from our Global Health database is about alcohol-induced depression:

Stick to the facts, Alcohol Concern, 2013: "numerous" examples of inappropriate advertising and high levels of alcohol brand recognition among the young in the UK.

Joseph Rowntree Foundation report on UK school children 2011: 70% of Year 9 students (age:14 years) and 89% of Year 11 (age:16 years ) students have had an alcoholic drink. Year 9 students drink alcopops, beer or lager. By Year 11, students are most likely to drink beer, lager, spirits or liqueurs. One of the risk factors for underage drinking (less than 18 years old in UK) is spending more than two evenings a week with friends who drink.

Game on: do children absorb sports sponsorship messages?: 76 % of a group of Australian 5-12 year olds could correctly align at least one logo of a sponsor with a sport…and bear in mind most of the sponsors are fast food or alcohol! (This article was sourced from our Global Health database).

Minimum unit pricing (MUP, a minimum price for alcohol per unit sold) is key to alcohol harm reduction efforts. (Canada has this and their Centre for Addictions Research of British Columbia (CARBC) estimated that over a 20 year period, a 10% increase in the MUP in British Columbia, reduced consumption of alcohol by 16.1%).

In 2014, the alcohol industry managed to:

1.     get a delay over MUP being introduced in Scotland by referring it to the EU

2.     get an emasculated MUP introduced into the rest of the UK

3.     got the UK government to relax pub licensing laws for the period of the world cup

In Brazil, host to World Cup 2014, alcohol is banned within football stadiums because of a past history of violence and murder between rival fans, BUT

4.     FIFA insisted that the Brazilian ban be suspended so alcohol sales were allowed for its partner Budweiser (part of the FIFA family of sponsors who help fund the world cup and FIFA’s activities).

During the 2010 World Cup [South Africa], A&E attendance in the UK as a result of assaults linked to alcohol use increased 37.5% on the days England played!  What are Brazilian public health officials facing now?

Is it all gloom for public health and sports events?

Figures released by Sport England in 2013 showed 15.5 million people aged 16 and over playing sport at least once a week, a 750,000 increase on 2012 after the London Olympics and 1.57 million more than when London won the bid in 2005. in addition, the joint UK Government and Mayor of London report “Inspired by 2012: The legacy from the London 2012 Olympic and Paralympic Games” tells us that there was an extra £150 million a year for primary school sport for two years, starting in September 2013.

Bottom line: Are we in the UK going to have a generation “inspired” to take part in sport or to watch sport increasingly sozzled? What will Cricket World Cup 2019 be like for the person in the stand?

"But no one told me it's okay to not drink": a qualitative study of young people who drink little or no alcohol.  “the insights of young light and non-drinkers [aged 16-25] could be useful when thinking about how to change the prevailing drinking culture”

Who's at risk? Ethnic drinking cultures, foreign nativity, and problem drinking among Asian American young adults. “A hypothesis on the moderating effect of integration into ethnic cultures indicated by ethnic language use was supported for US-born Asian Americans”

Learning from London 2012: A practical guide to public health and mass gatherings
Apparently we did gain something for global public health from our Olympics even if it’s not  yet translated into home fitness!

Binge drinking is a serious, under-recognized problem among women and girls

The youth of today could be our farmers of tomorrow but how do we encourage them to take a career in agriculture seriously? Special International Youth Day report by Rebecca Quarterman The number of young people involved in agricultural work in East Af…