Sometimes truth is stranger than fiction. It may seem like some of the species in this article are the making of horror films and scary stories but they’re all too real. Besides giving us the creeps, these spooky specimens offer up some surprising ‘tricks’ and ‘treats’ for humans and the environment. 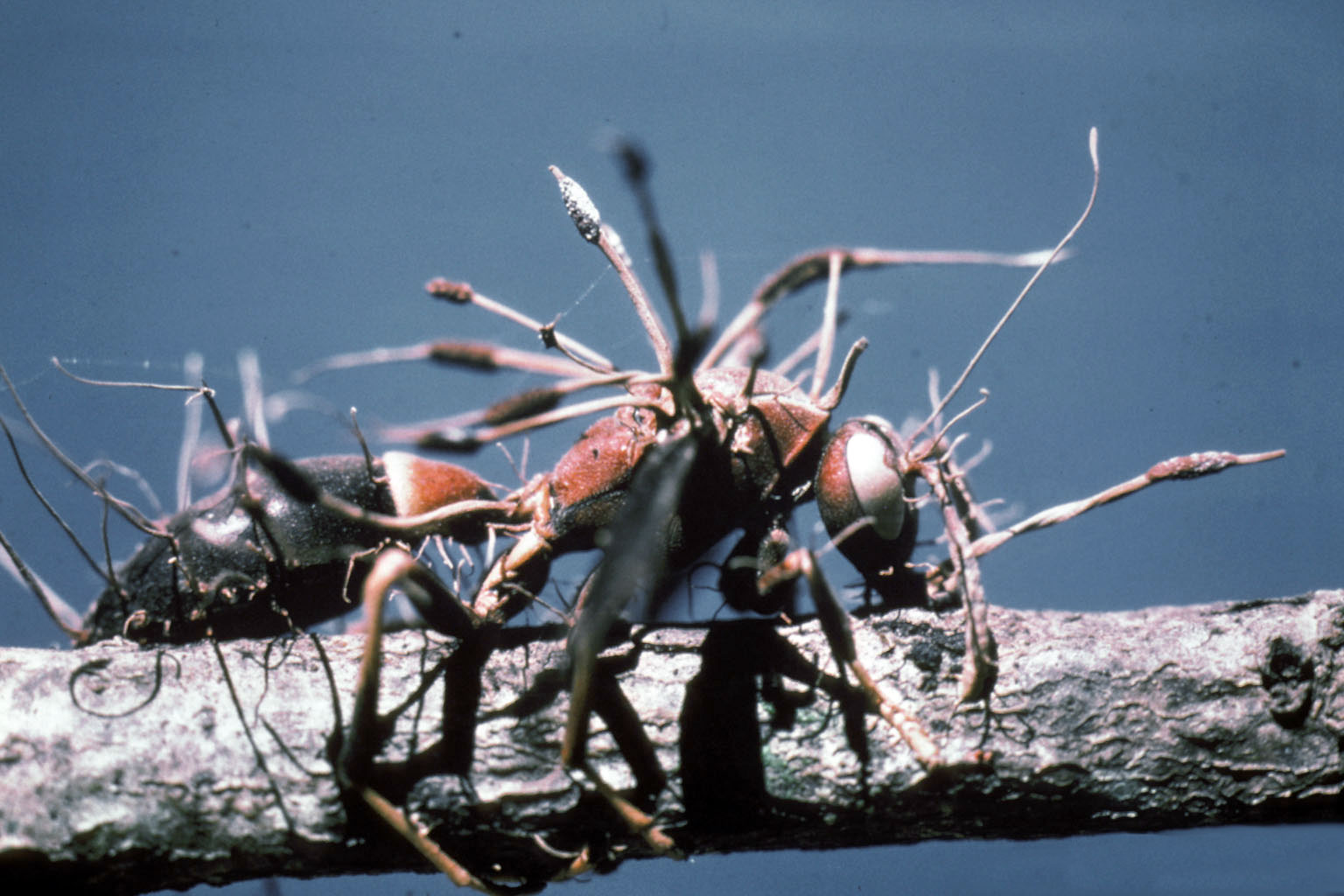 Something that infects an unsuspecting host to control its movements and is hell-bent on infecting others – sound familiar to anyone who’s watched a zombie film? This is in fact the typical behaviour for a certain number of Ophiocordyceps fungus species in tropical regions of Central America, Africa, Brazil and Thailand.

A recent journal paper co-authored by CABI’s Dr Harry Evans, describes how, “These fungi have the ability to penetrate the exoskeleton of the ant and to manipulate the behaviour of the host, making it leave the nest and ascend understorey shrubs, to die biting onto the vegetation: hence, the term zombie-ant fungi to describe this behavioural changes on the host. It is posited that this behavioural change aids spore dispersal and thus increases the chances of infection.”

Watch this gruesome video and consider yourself lucky you’re not an ant!

Infects host insect species, controls movement, kills it and spores erupt from the head to infect others.

The remains of the insect and fungi have been used in traditional Asian medicine for centuries. Today a couple of Ophiocordyceps species are being tested for a number of human health benefits, including boosting exercise performance, ant(i)-ageing, potential tumour inhibitors, type two diabetes control, heart health and inflammation control. 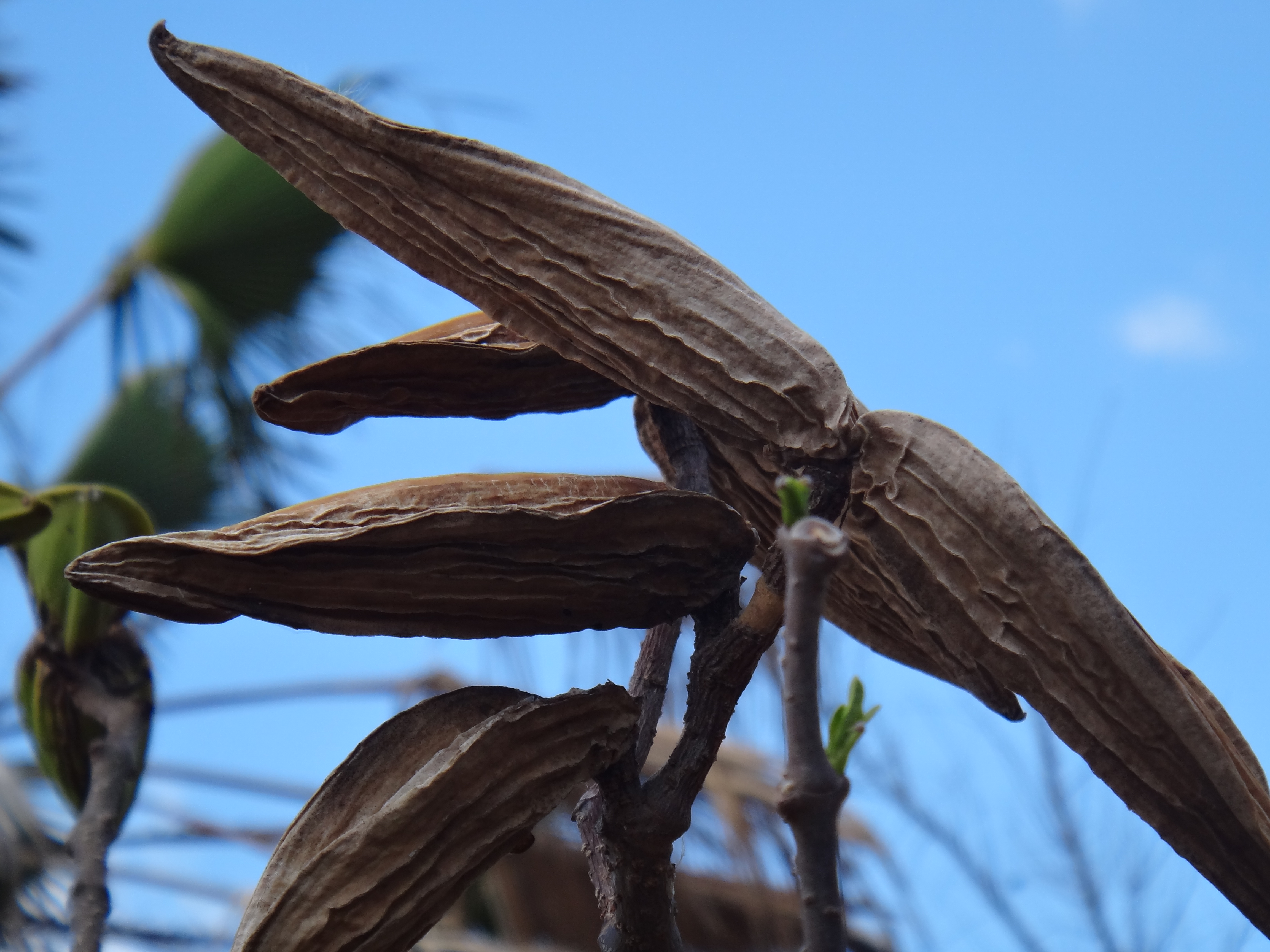 Devilish by name, devilish by nature. Rubbervine (Cryptostegia madagascariensis), also dubbed ‘devil’s claw’ because of its impact on other species and menacing looking fruit pods (pictured above), is a woody vine native to Madagascar. It was introduced to the semi-arid region of north east Brazil as an ornamental plant but has ‘escaped’ domestic gardens and is now wreaking havoc on the local environment and economy.

The grip of devil’s claw is squeezing the life out of the carnauba palm, known locally as the ‘tree of life’. The valuable natural wax extracted from this palm is prized for its high melting point making it ideal for car, shoe and floor polish, surfboard wax and glazes for sweets such as Smarties. The industry is worth US$120m per year to the local economy making the devil’s claw invasion and spread a terrifying prospect for those dependent on the industry. Wax collectors are already abandoning carnauba plantations as the palms succumb to the vicious vine’s suffocating clutches.

Removing it is difficult and hazardous due the plants large seed bank and toxic latex. However, since 2018 CABI has been researching a cost-effective and sustainable biological control solution using a rust fungus from Madagascar to control devil’s claw in Brazil.

In Brazil, the plant has earned a second nickname of ‘viuva’ in Portuguese, which translates as ‘widow-maker’, after women in Madagascar traditionally used the poisonous latex to ‘bump off’ their unfaithful husbands.

Another plant also with the common name devil’s claw, Harpagophytum, has been used as a traditional pain relief medicine in southern Africa. More recently, in 2007 a study found strong evidence it was effective in treating lower back pain and osteoarthritis pain of the knee and hip. 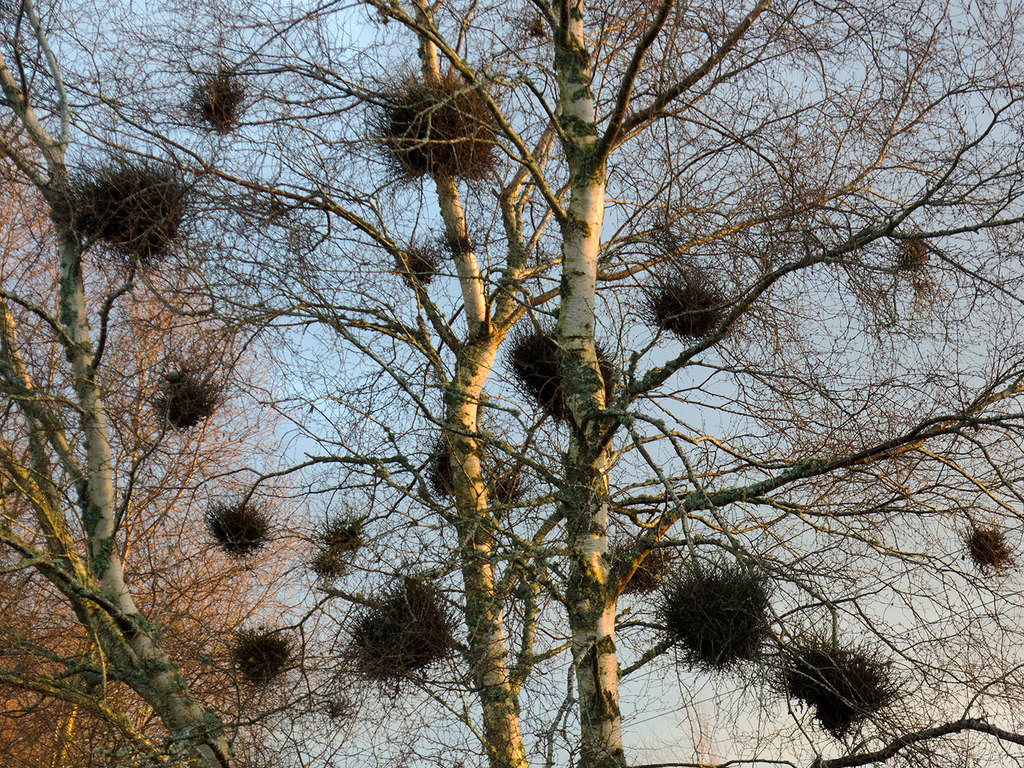 Casting a spell on its victim witches’ broom (or witch’s broom) is a deformity in a woody plant, typically a tree. They are caused by fungal, viral or bacterial activity, and occasionally insect activity which manipulate the growth of buds into producing multiple stems. These then tangle to give the appearance of a broom or a bird’s nest. The bigger the broom, the more years of growth.

Witches’ broom occurs globally across temperate and tropical regions. In most cases it has little damaging impact on its host; however one particular fungal variety called M. pernisiosa causes a real problem for cocoa farmers in South and Central America. In a recent book called Witches’ broom disease (Moniliophthora perniciosa): history and biology, Dr Harry Evans, CABI, contributes a chapter on the disease, its impact on cocoa tree life cycles and effective control measures.

Although data is limited, scientists estimate average cocoa crop losses from witches’ broom in Colombia and Brazil at about 30%, though up to 90% losses can occur where no control methods are used. A study in 1985, in countries affected by the disease, estimated $120 million of potential earnings could have been lost.

It can severely damage cocoa production. Symptoms include pod dysmorphia, black colouration and liquefaction of the interior. The cocoa beans inside the pods are rendered dead and unsuitable for chocolate production.

It provides an important habitat for a wide variety of organisms. Some species of moths are specific to particular types of witches’ brooms, relying on them for food and shelter for their larvae. Various larger animals nest in them, including the northern flying squirrel. 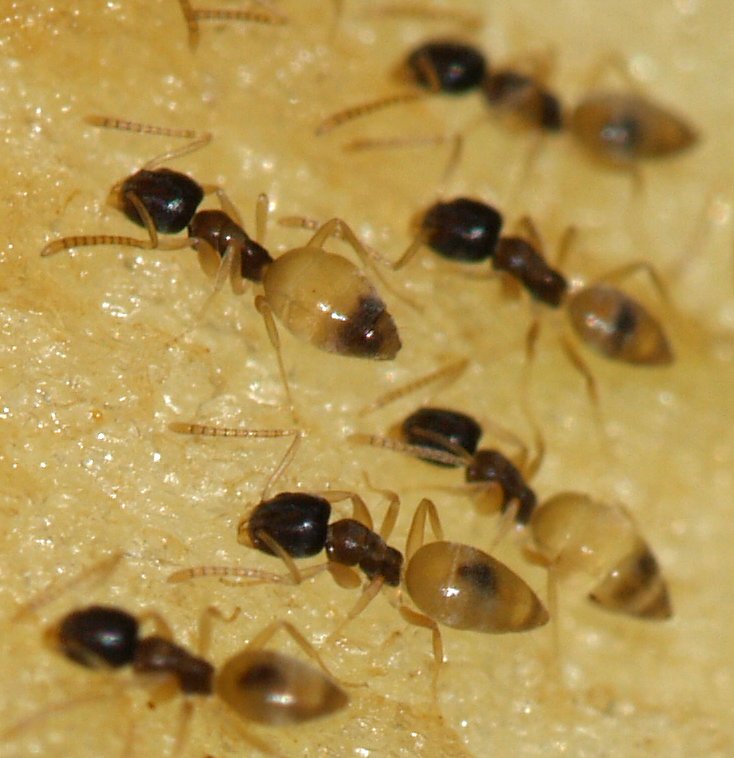 A petite pesky pest, the ghost ant (T. melanocephalum) measures only 1.5 mm in length and its translucent abdomen provides the origin of its name. Although thought to originate from tropical regions of Africa and Asia, it has been found in heated buildings as far north as Canada and Finland due to its accidental spread by humans. The ghost ant often nests in residential housing and consuming household food. In areas such as Florida it is considered one of the worst house-infesting pests.

The ant could be responsible for transporting pathogenic microbes in hospitals. One study found at least 14 different types of bacteria in hospitals, including antibiotic resistant strains.

Some people can also suffer a slight, red irritation of the skin following contact with this ant.

On farms, the ghost ant has been found to protect certain pest eating biological control organisms resulting in higher yields, particularly on tomato crops in China 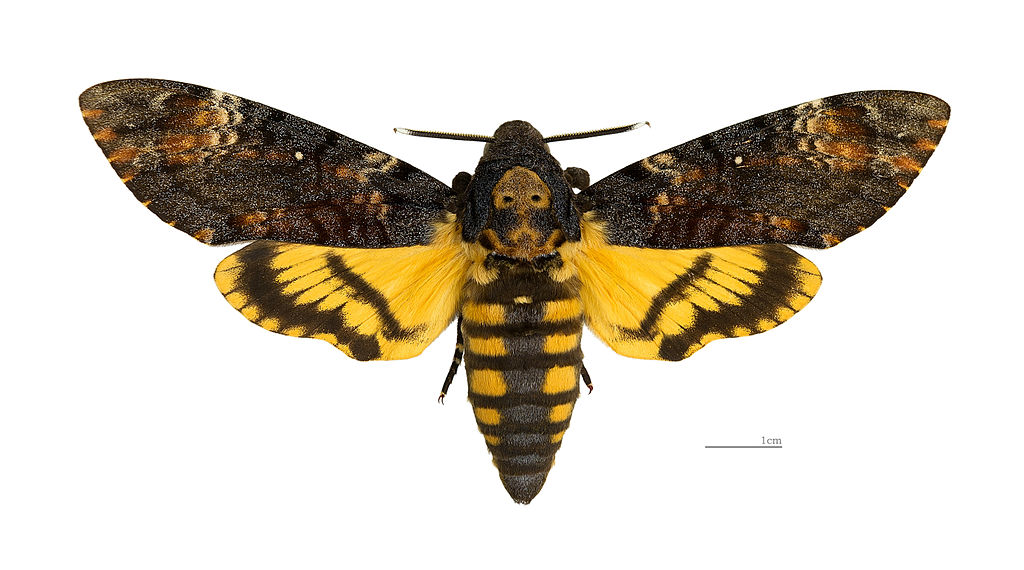 The distinctive death mask on the back of the Acherontia moth has long inspired many a superstitious and scary tale. In 1840, entomologist Moses Harris wrote that “It is regarded not as the creation of a benevolent being, but the device of evil spirits… foretelling war, pestilence, hunger, death to man and beast.” In more recent times the death’s-head hawkmoth has featured in Bram Stoker’s Dracula and Thomas Harris’s book Silence of the Lambs (check out the poster from the 1991 film).

Native to Africa, southern Europe and the Middle-East there are three species (atropos, styx and lachesis) growing up to 5 inches long. Like trick or treater’s, they like sweet things, often raiding bee hives in search of honey to eat. They avoid being stung, it is believed, by masking themselves by secreting an odour similar to that given off by worker bees. Some scientists also believe the death mask pattern resembles worker bees providing a further disguise.

Adding to the scare-factor, the moth ‘screams’ when threatened by expelling air through its proboscis (tongue), which vibrates like the reed of a wind instrument.

A. atropos is the fastest moth in the world; it can fly at speeds of up to 30mph!

I hope this spooky species list made you appreciate the natural world as a weird, wonderful… and wicked place!

Many of the species listed here are not only spooky but are also invasive alien species. For more information visit CABI’s Invasive Species Compendium

Did you know that in many countries around the world pumpkins are a beloved staple food – not just in the Autumn/Fall and during Halloween but all year round? Yet, this humble cultivar of a squash plant, like any other food, is susceptible to a range o…