Infectious salmon anaemia virus (ISAV) is a pathogen of marine-farmed Atlantic salmon (Salmo salar). However, ISAV can be transmitted experimentally to fish in fresh water. Outbreaks are restricted to Atlantic salmon but other salmonids may harbour the virus and act as reservoirs. ISAV remains an emerging fish pathogen because of the asymptomatic infections in marine wild fish. Natural outbreaks are usually chronic, lasting for several months and mortality varies between 15-100%. 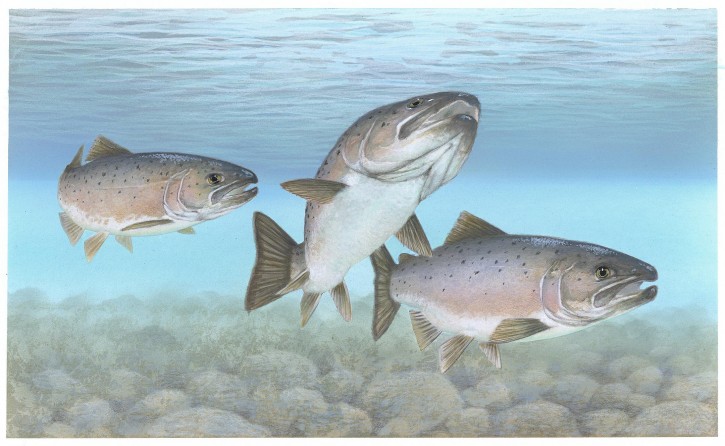 Diagnosis is based on characteristic gross pathology and light microscopy, anaemia and absence of pathogenic bacteria.  Supporting diagnosis of the virus is achieved by culture on the salmon head kidney cell line (SHK-1), a polymerase chain reaction (PCR) test or enzyme-linked immunosorbent assay (ELISA).2

ISAV was first diagnosed in southwest Norway in 1984 and has since been diagnosed in Canada, Scotland, the USA, the Faeroe Islands and Chile. The first outbreak of ISAV in marine-farmed Atlantic salmon in the Southern hemisphere occurred in Chile in 2007.

An outbreak in Scotland that spread over a wide geographic area with transported fish and harvest vessels in 1998-1999 was eradicated at a cost of over £20 Million.1

More recently, the presence of ISAV was reported in samples from wild sockeye salmon from British Colombia in October 2011, however, that report is disputed by the Canadian Food Inspection Agency (CFIA). The samples that showed that ISAV was present in two of 48 sockeye salmon smolts from the Pacific coast of Canada were sent for analysis by Professor Rick Routledge, of Simon Fraser University, according to media reports. It is unclear whether those samples were analysed as a part of regular health controls, which are mandatory in some countries, or because an infection was suspected. The samples were analysed at the Atlantic Veterinary College (AVC) in Charlottetown, Canada. This lab is run by Dr Kibenge and is one of the only two reference labs nominated by the World Organisation for Animal Health (OIE) as its reference lab for infectious salmon anaemia virus. The other reference lab is located at the National Veterinary Institute in Oslo, Norway and is run by Dr Sindre.

After Dr Kibenge’s findings were made public, the Canadian Department of Fisheries and Oceans conducted its own tests and said that those tests were verified by an independent lab in Norway – both concluded that ISAV was not present in British Colombia. However, the datails of how many samples were examined or whether those samples were the same samples that were tested at the AVC are unclear. The CFIA also promised to sample around 8000 salmon in British Colombia in response to concerns about ISAV, however the results of those tests are not yet known.

Meantime, Dr Kibenge’s lab was audited twice, first by the CFIA in November 2011, and then by an independent panel appointed by the Canadian government and the OIE in August 2012. The first audit raised concerns about possible cross contamination of samples, whereas the second audit concluded that his lab “fell well short of acceptable quality standards. However, Dr Kibenge said he stands by his findings.

Chief food safety officer for the CFIA, Brian Evans, then wrote to the OIE, requesting that the OIE act in accordance with the audit findings, and “place the reference laboratory status at the Atlantic Veterinary College in abeyance.”

The letter has surprised other experts, who worry the government is trying to silence a scientist whose findings the CFIA disputes. The CFIA has long maintained infectious salmon anaemia is not present on the West Coast, but if the disease is confirmed by the government, it could lead to severe restrictions of salmon export.

The OIE issued a statement on Tuesday (27 November 2012) saying it conducted an audit of a lab at the Atlantic Veterinary College in Prince Edward Island and found “a series of weaknesses in the system [that] have a direct impact on the quality of diagnosis conducted by AVC.” The OIE also said that the conclusions of its audit will be reported to its elected governing bodies and finally, to its World Assembly of Delegates, in May 2013. “OIE will take no official action before this,” the statement said.

Such a decision by the OIE should give more time to everyone involved to conduct more research, which should shed more light on the presence or absence of ISAV in wild salmon in British Colombia. In the best case scenario this stand-off may lead to a more informed debate on the future of open water fish farming.

Latin America is doing far better at controlling and ultimately eliminating rabies from the region than Africa. Latin America uses dog vaccination; Africa relies on post-exposure prophylaxis. Can the lessons learned in Latin America be applied or adapted to Africa? At RSTMH “Challenges in Disease Elimination”, [September 12-16th, 2016], Dr Katie Hampson described the PAHO surveillance & management framework operating in Mexico and Brazil, devised to support the elimination of rabies in 25 PAHO countries, which could be adapted. Tanzanian researchers have developed a targeted surveillance system to improve case detection for the African setting where resources are constrained.