The idea that the flap of a butterfly wing in China could cause a tornado in Texas comes from the concept of  ‘sensitive dependence on initial conditions’ as part of the chaos theory, and has inspired short stories, poems and films, and the term ‘Butterfly Effect’ has entered the language. Assigning cause and effect in science is notoriously difficult, but there is growing evidence that there is a link between an anti-inflammatory drug for cattle, the demise of the Asian vulture. and the death of children from rabies in India.

The depressing story of the collapse of vulture populations in India began in the 1990s when it was noticed that the numbers of vultures, a common site in rural India, were suddenly in decline. The loss of vultures had a devastating ecological effect, as well as a social impact on the Indian Zoroastrian Parsi community, who traditionally use vultures to dispose of human corpses in "sky burials", and had to find alternative ways to dispose of their dead. The cause of the decline was a puzzle for scientists. New or emerging diseases such as West Nile were considered as a possibility, as bird populations in other parts of the world had been devastated by spreading viral diseases.

Vultures have performed a vital role in clearing up the rotting carcasses of animals. I can remember on my first trip to India in 1983, stopping on the road from Dehli to Agra to take photographs of 50 or more griffon vultures gathered around a stinking pit of bones and carcasses. The driver was surprised at the request to stop to see the vultures – a common sight to him, and didn’t realise that then the time the largest raptor I was used to seeing in southern England was the sparrow hawk.

The culprit responsible for the vulture’s problems seems to be a drug residue in the carcases on which they feed. Diclofenac (2-(2,6-dichloranilino) phenylacetic acid) is a non-steroidal anti-inflammatory agent, which has analgesic as well as anti-inflammatory properties. Looking on the CAB Abstracts Database it can be seen that diclofenac has been used in cattle to treat a number of different conditions including arthritis, mastitis, repeat breeding, babesiosis, theileriosis, parotitis, downer cow, radial paralysis, mastitis, and emphysema. Often it is used in conjunction with other drugs for supportive therapy. Because of the ecological problems that the residues of the drug have caused the manufacture of diclofenac for veterinary purposes has been banned in Nepal, India and Pakistan. It is, however, still available as a human drug, and is still cheaper than a safer substitute meloxicam.

The severe effects are due to a number of factors that have come together. Vultures are more susceptible to the toxic affects of diclofenac, in particular acute kidney failure, than are other species. In India, cattle do not usually go into the human food chain and the dead ones would be left for the scavengers. Another unfortunate factor is that diclofenac has a particularly long elimination half life in cattle (30.5 +/- 9.4 hrs compared with 1.1 hours in humans), and would therefore more likely to form residues in the carcase. Even with restrictions on the use of diclofenac, vulture populations will not recover quickly. Vulture populations have been reduced by more than 99% and several species of Gyps are now on the endangered species list. Gyps vultures take several years to reach sexual maturity, and a pair produces only one or two young every one or two years, so it could take decades before their populations recover. Concern for vultures has also spread to Africa where diclofenac is now being manufactured.

As nature abhors a vacuum, the gap left by the vultures has provided other scavengers with a feast. The opportunity has been exploited by stray and feral dogs, usually the pariah dogs, whose numbers have grown.  With the growth in the numbers of dogs the risk of rabies has also grown.. Dogs are the main vector of human rabies in India.  It is estimated that about 10,000 people die each year from rabies in India, and most of these are in the rural areas and a large proportion are children. The cost of post exposure treatment for the poor is also a contributing factor to the high death rate. 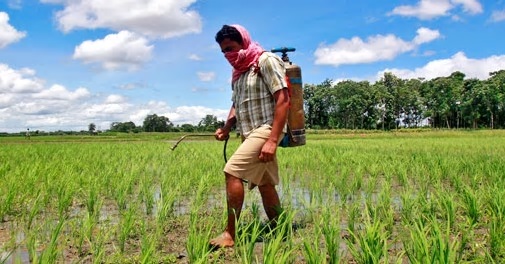