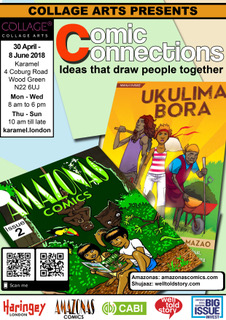 Comics have long played a role in entertaining young people, and even adults, going right back to the Golden Age of Comic books in the 1930s. One only has to think of Superman, Batman, Wonder Woman, Captain Marvel and many more.

But you would be forgiven for being surprised at knowing that comics can also have a very important role to play in educating teenagers and young adults about the value science and technology holds in helping farmers grow more and lose less.

Now, an exhibition of the comic book Shujaaz (which means ‘hero’) – presented by Karamel at Collage Arts, is revealing how animation and narrative knits together to tell the story of how smart agriculture, as well as issues including unemployment, corruption, youth, cost of living and infrastructure, can be raised with Kenyan and Tanzanian 15-24 year olds.

The exhibition, which is being held at Karamel at College Arts Studio, Coburg Road in Wood Green, London, until 8 June 2018, includes comics commissioned by CABI and the Africa Soil Health Consortium (ASCH) to promote the most cost-effective and affordable approaches to bettering food and nutrition security, enhancing soil fertility, and ultimately improving yields for crops including maize. 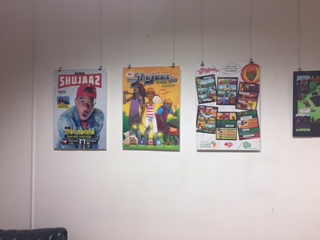 The most recent series of stories have encouraged young farmers in Tanzania to grow common beans. Shujaaz collected challenges in bean production – crowd-sourced using the Shujaaz social network platforms – and subsequently addressed these issues through the storylines developed in the comics and on syndicated radio programmes.

The comics, curated by Well Told Story, have also played an integral part of the CABI-led project ‘Scaling up improved legume technologies in Tanzania (SILT)’, which used a multi-media campaign approach to encourage thousands of farmers to adopt improved legume technologies. This included ways to produce healthier and more profitable crops of common bean and soybean. 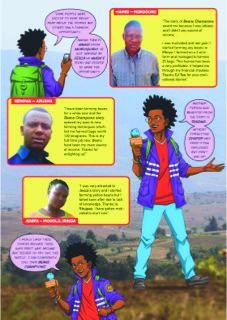 Duncan Sones, part of CABI’s development and communication team who has been commissioning Shujaaz to suggest to young African’s that they should reconsider farming, said, “The exhibition is all about showing how non-traditional forms of mass communication in the educating sense can work towards changing the opinions of young people in a more positive fashion.

“Young people have seen their grandparent’s and parent’s incomes fall as a result of climate uncertainty making many traditional crop varieties unsuitable and soil degradation, pest and diseases resulting in levels.

“Shujaaz, however, has seen that there is considerable potential for young people to be actively involved in agricultural value chains.”

Duncan highlighted the 2016 Shujaaz survey in Tanzania as an example of how young people’s negative perceptions of agriculture can be changed. The results showed 56 percent of young people saw agriculture as ‘a very cool source of income’ and 27 percent were interested to try agricultural ideas in the future.

For more information on the SILT project, funded by the International Development Research Centre and partnered with Farm Radio International, the Africa Fertilizer and Agribusiness Partnership and IITA/N2Africa, see: https://www.cabi.org/projects/project/65303

Read the news story about how a multi-media campaign helps improve food security in Tanzania as part of the SILT project here.