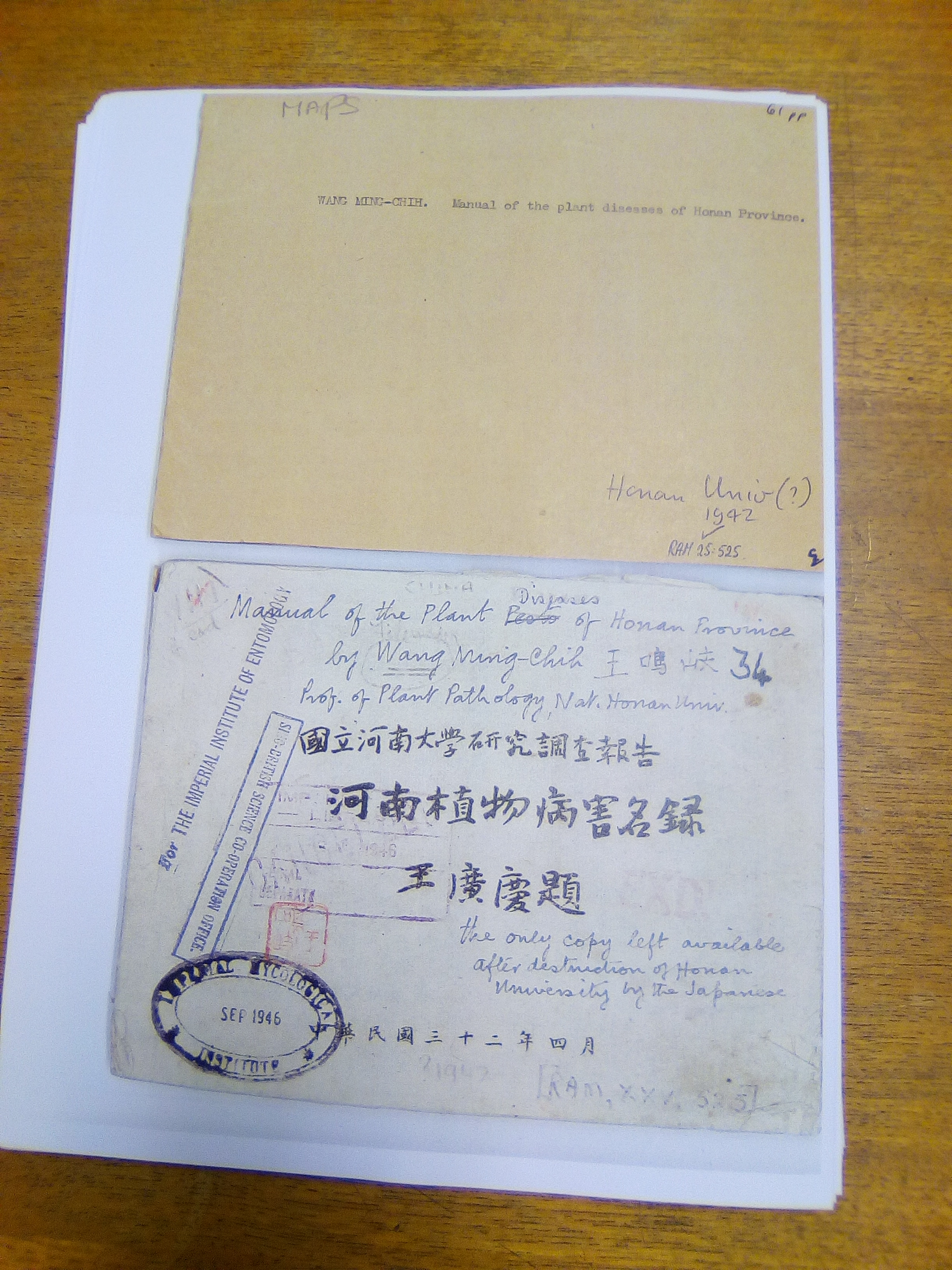 Photo: The 1942 text by Professor Wang Ming-Chih, returned to China after more than 70 years

Lesley Ragab thought she knew CABI’s stock of more than 24,000 books and 2,000 journals like the back of her hand after serving as librarian at the organisation’s Egham, UK, office for over 20 years. That was until she stumbled upon a rare book of plant diseases in Honan (Henan in modern Chinese Pinyin) Province, China, which had been donated to CABI’s Library more than 70 years ago.

Lesley, who keeps a close watch on a range of material – covering subjects as broad as mycology, entomology, nematology, microbiology and crop protection (to name but a few) – could hardly believe her eyes when the non-descript book with Chinese writing on the cover presented itself while answering a staff enquiry.

The 1942 text, a ‘Manual of Plant Diseases of Honan Province’, by Professor Wang Ming-Chih, of Honan University, caused more curiosity when hand written notes in English on the sleeve stated: ‘the only copy available after destruction of Honan University by the Japanese.’

Lesley said: “I immediately thought this was something of interest and deserved closer attention – not least because it was handwritten in both Chinese and English. Stamps on the front indicated that it was received by the Imperial Institute of Entomology in September 1946 and has been in CABI’s care ever since.

“Notes on the front also indicated that the book had been referenced in a 1942 edition of the Review of Applied Mycology shortly after it was first published.

“Naturally, I then thought that perhaps the book should go back to China and be part of the archives in the country where Professor Wang Ming-Chih wrote it.”

During the late period of Second Sino-Japanese War (from April to December 1944), the National Revolutionary Army of the Republic of China, into which the Communist Party of China were incorporated was at war with the Imperial Japanese Army Forces as part of Operation Ichi-Go, which formed three separate battles in the Chinese provinces of Henan, Hunan and Guangxi.

Honan University was at the time destroyed and it is believed that the only surviving copy of Professor Wang Ming-Chih’s book has been safe in CABI’s hands for over 70 years.

Dr Qiaoqiao Zhang, CABI’s Director of Memberships, had the recent honour of returning the book back to the Chinese authorities from where it has been absent for nearly eight decades. It was presented to the National Agricultural Library of China, hosted by the Agricultural Information Institute (AII) of the Chinese Academy of Agricultural Sciences (CAAS) in Beijing, when a delegation led by Dr Sun Tan, the Director General of AII-CAAS, paid a visit to CABI’s Head Office in Wallingford in April 2017. The book is now on loan to CAAS’ Institute of Plant Protection, which hosts the Joint Laboratory for Biosafety between the Chinese Ministry of Agriculture and Rural Affairs and CABI. 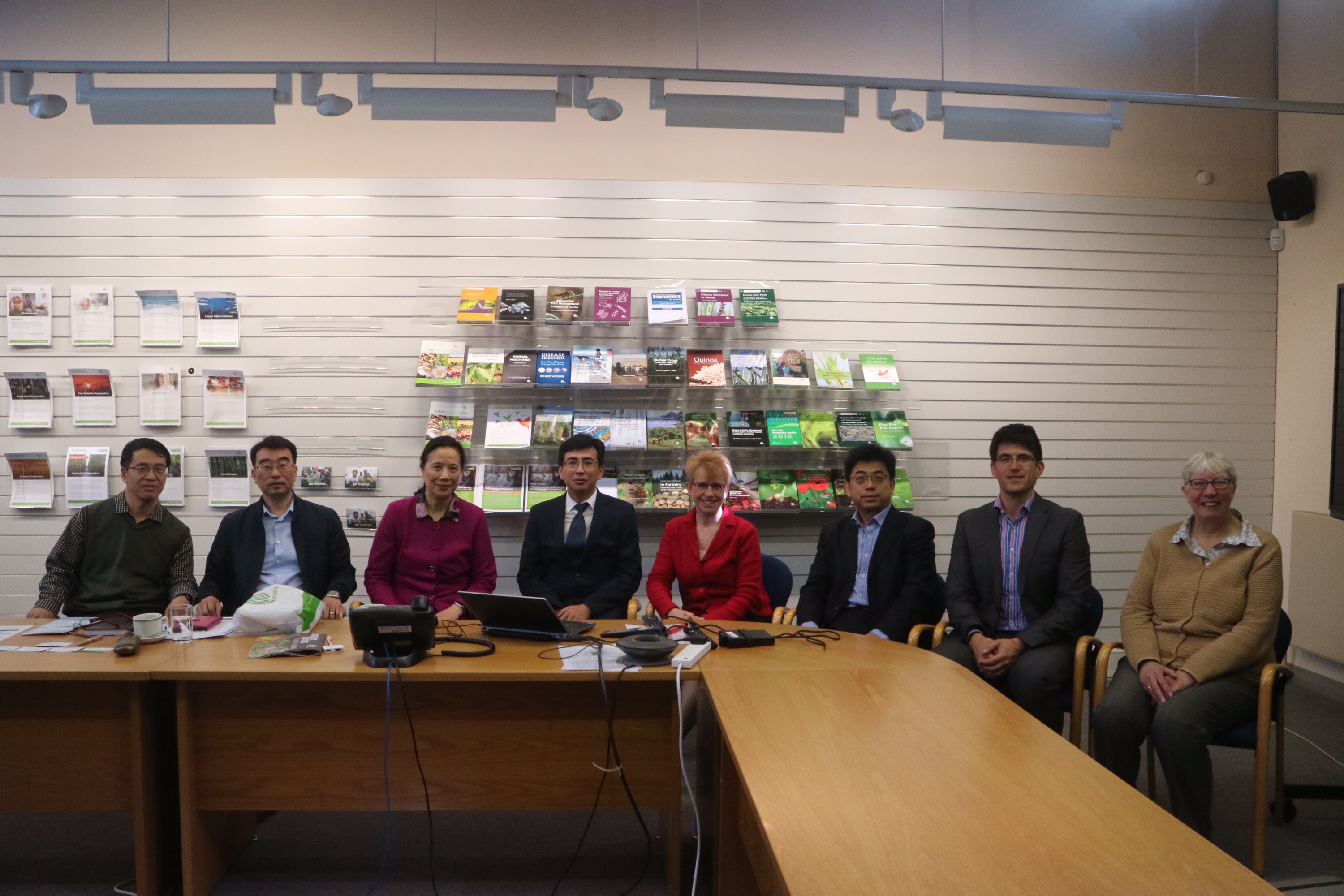 Photo: The ALL-CAAS delegation during their visit to CABI

Dr Zhang said, “The book is interesting for many reasons pertaining to its rarity not least because it was handwritten in two languages and most likely was one of a very limited run of no more than 200 copies. I’ve no reason to doubt that the person who wrote on the front cover genuinely believed that the copy we had for so long was the last one in existence.

“The contents of the manual are very specific to plant diseases of the Honan Province of the that period, and as such is a historical record which could be of major use to researchers studying climate change and the spread of plant pathogens today.

“Therefore, we believe this important document has now found its rightful home at the National Agricultural Library of China – in the country where it originated.”

Keen not to completely lose sight of the manual’s contents and historical value, Lesley first made sure she kept a backup photocopy for CABI to ensure the information remained available before it was handed over to colleagues in China.

The National Agricultural Library of China hosted by AII-CAAS has a collection of 2.1 million copies of books and journals, and boasts an impressive collection of many rare books at its Heritage Section.

Dr Sun Tan, said, “We welcome home the Manual of Plant Diseases of Honan Province’, and appreciate CABI’s good gesture in presenting it to the National Agricultural Library of China.

“CABI and AII-CAAS have enjoyed a long and fruitful partnership over the past 30 years. This has included everything from collaboration on abstracting arrangements, the consortium purchase of CABI publishing products to special projects to collate and analyse pest and disease data for risk assessment and strategy development under the Belt and Road initiative.”

The National Agricultural Library of China has a special section for CABI’s publications.