Around the World in 80 Spices

From the dawn of civilization spices were sought after eagerly. The seafarers of the ancient lands braved the raging waves and winds to go to distant lands in search of spices and aromatics.

The discovery of the fairyland of spices and Spice Islands was one of the major aims of most circumnavigations during the age of Renaissance. Such navigational expeditions and discoveries had opened up the flora and fauna of many countries to the rest of the world. The most notable was the ‘Columbian exchange’, following the discovery of the American continent by Columbus and Amerigo Vespucci. Columbus went in search of India and black pepper but discovered America and red pepper. The exchanges that followed the discovery of new lands changed radically the cuisines of the world and medicines too, “reshaping every one’s food basket and medicine chest significantly.”

Some major spices that drew the West to the East – how many of these spices do you use weekly?

The use of spices is the second most significant event that has happened to cooking (the first being the use of salt, the most important taste enhancer). Spices can improve the palatability and appeal of dull diets or even spoiled food. Piquant flavours stimulate salivation and promote digestion. Pungent spices can cause sweating, which may even cause a cooling sensation in tropical climates. Conversely, they can add a sense of inner warmth when used in cooked foods in cold climates.

The addition of spices profoundly affects basic taste sensations because their addition imparts a bouquet of flavour notes to a dish. Such flavour profiles are described variously and no spice has a single flavour profile, with the possible exception of watercress that imparts just pungency without any accompanying flavour notes. The flavour notes of spices are described variously as bitter, earthy, floral, fruity, hot, nutty, piney and so on. Flavours interact with other ingredients to generate the final taste and flavour of a given dish, and the endless combinations are unique.

There are also many healthcare benefits associated with spices. They have been used in many traditional medicine systems, most notably in the Indian traditional medicine system (known as Ayurveda). The medicinal benefits of spices have only recently been recognized by the scientific community. As a result of the accumulated knowledge on the chemistry of particular active ingredients and their testing in animal studies, scientists have isolated the individual medicinal properties of many herbs and spices. Some health benefits include antidiabetic antioxidant, anti-inflammatory characteristics. The infographic below shows the medicinal properties of five commonly used herbs & spices: 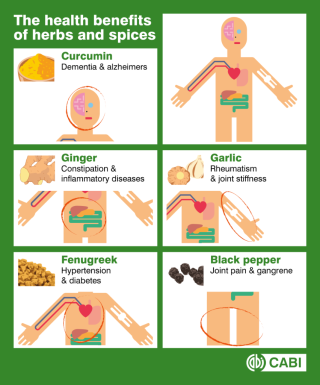 Spices are now making an entry to the human health management arena in the form of health foods. Many spices have health benefits capable of providing nutraceutical benefits for the prevention of many human ailments, especially against the lifestyle diseases that are plaguing affluent society in all countries.

Spices have played a very colourful role in human history. Now it is difficult for us to appreciate the vast influence that spices had on people and nations during the checkered history of humankind. Wars were fought, kingdoms were built and demolished, cities grew, flourished and declined, and the destiny of humankind was influenced so much, all for the sake of spices.

Parry wrote: “It is difficult for us who buy our supplies of pepper, cassia, cinnamon, cloves, ginger, mace and nutmeg so casually and so cheaply to believe that there was ever a time when these spices were so eagerly sought after and represented so much wealth and power that destiny itself was indivisible from them”.

BB Aggarwal, a specialist in spices pharmacology, commented in a recent paper : “As side effects and disappointments with modern drugs grow, and the potential of spice-derived nutraceuticals against various neurodegenerative diseases becomes more evident, some of these nutraceuticals may be developed as new drugs against Alzheimer’s disease, Parkinson’s disease, or other neurodegenerative maladies.”

The saga of spices goes on and on. Demand has never been higher. 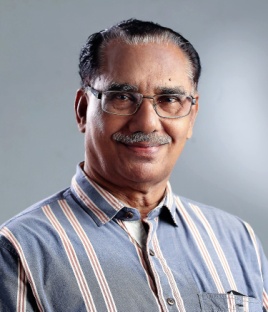 P.N. Ravindran is one among the best-known spice scientists, whose experience in the field of spices spans more than three decades. Dr Ravindran has authored more than 300 research and review papers and edited monographs on Black pepper (Harwood Academic, 2000, now CRC), Cardamom – the genus Elettaria  (Taylor & Francis, 2002), Cinnamon and Cassia – the genus Cinnamomum (CRC Press, 2004), Ginger – the genus Zingiber (CRC Press, 2005) and Turmeric – the genus Curcuma (CRC Press, 2007). He has compiled and published the large volume entitled Advances in Spices Research: History and Achievements in Spices Research in India since Independence, a valuable document and database on spice research in India. CABI has entrusted with him the writing of the first scientific Encyclopedia on Herbs and Spices. He is also the author of the much acclaimed book, Lotus the Cosmic Flower.

The Encyclopedia of Herbs and Spices, authored by P N Ravindran is now available to buy with 20% discount –  enter code CCAB20 in the CABI Bookshop

Welcome to the third and final blog of this series. CABI recently hosted a webinar on Opening up agricultural research and data with a great panel of expert speakers who highlighted some of the many opportunities inherent in “open agriculture” (click h…