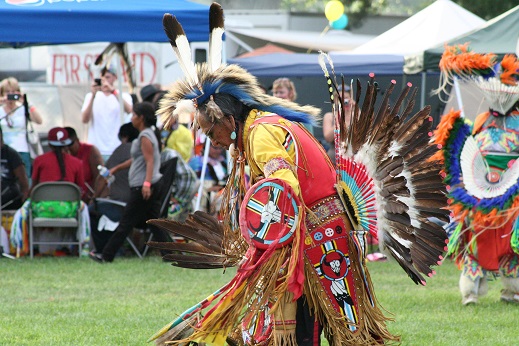 Planeta.com, a website promoting “conscious travel”, has designated the 7-13 August as Indigenous Peoples Week, when it aims to promote news, social media and storytelling about indigenous peoples and tourism. Like many themes in tourism, this is one where there is both a positive and a negative side. Where tourism development is led and managed by indigenous people, it can not only be a source of income, but help to maintain traditions, culture and crafts. But all too often tourism has instead exploited vulnerable populations, with the most extreme cases being the ‘human safaris’ where tourists are taken to places such as India’s Andaman Islands to view and photograph tribal populations as if they were animals in a zoo. Indigenous peoples in the worst examples can suffer from diseases newly introduced by visitors, or be vulnerable to both financial and sexual exploitation. Indigenous peoples with little economic or political power can also be displaced from their traditional territories to make way for tourist development, or prohibited from using natural resources in areas designated for conservation and ecotourism.

The United Nations estimates that there are more than 370 million indigenous people spread across 70 countries worldwide. Practicing unique traditions, they retain social, cultural, economic and political characteristics that are distinct from those of the dominant societies in which they live. The UN does not have an official definition of “indigenous”. Among other definitions, a common one is “the descendents of those who inhabited a country or a geographical region at the time when people of different cultures or ethnic origins arrived”. Among the indigenous peoples are those of the Americas (for example, the Lakota in the USA, the Mayas in Guatemala or the Aymaras in Bolivia), the Inuit and Aleutians of the circumpolar region, the Saami of northern Europe, the Aborigines and Torres Strait Islanders of Australia and the Maori of New Zealand. Canada is perhaps the place where indigenous tourism is most under the control of the indigenous populations, with regional associations linked with the Aboriginal Tourism Association of Canada which aims to support the growth of Aboriginal tourism in Canada and address the demand for development and marketing of authentic Aboriginal experiences.

Cassel and Maureira (2017) give a case study of Quebec, Canada, where Indigenous tourism has received increased attention and economic importance in recent years. Tourism is put forward as positive for economic as well as social and cultural development, through alternative income opportunities and the revalorization of traditions and cultural practices. From interviews with people in different ethnic nations, it was found that Indigenous tourism influences the ways in which individuals see themselves, and how they perceive their identity and culture.

Indigenous tourism in ‘Outback’ areas of Australia is discussed by Taylor et al. (2015). Corbari et al. (2016) report from Brazil on the potential of Indigenous Cultural Week in the Community of Tekohá Ocoy as a means of dissemination and socio-cultural appreciation through tourism. Schneider and Alvarenga (2015) discuss tourism development in indigenous land in the Brazilian Amazon, where tourism was identified by the indigenous peoples themselves as being a viable alternative economic activity to deforestation. The methodology of development of tourism products involved a series of activities, such as tourism workshops, interchange, register, planning tourist routes, proposals related to infrastructure and market studies specifically designed for each ethnic group.

Koot (2016) discusses the case of the Bushmen in the Kalahari, and how the Bushmen are an "Indigenous brand" that attracts tourists, creating revenue that trickles down into the area but hardly to those who are the brand. Taylor (2017) analyses a community-based Indigenous tourism project in a rural Maya village in Mexico's Yucatan. It is suggested that the project has exacerbated existing tensions and has arguably widened the gap between the politically and economically powerful and less powerful, marginalized families in the community. Tang and Hui (2014) examine legal empowerment of indigenous peoples participation in tourism development in ethnic areas of China.

The Council of Hemispheric Affairs website carried an article in 2014 on the destructive effects of tribal tourism. Information on many indigenous peoples has been collated on the http://www.indigenouspeople.net/ website.