CABI Books on Livestock Breeds and Breeding Are Essential Resource for Education, Research and Policy Influencing

This article focuses on the following books: 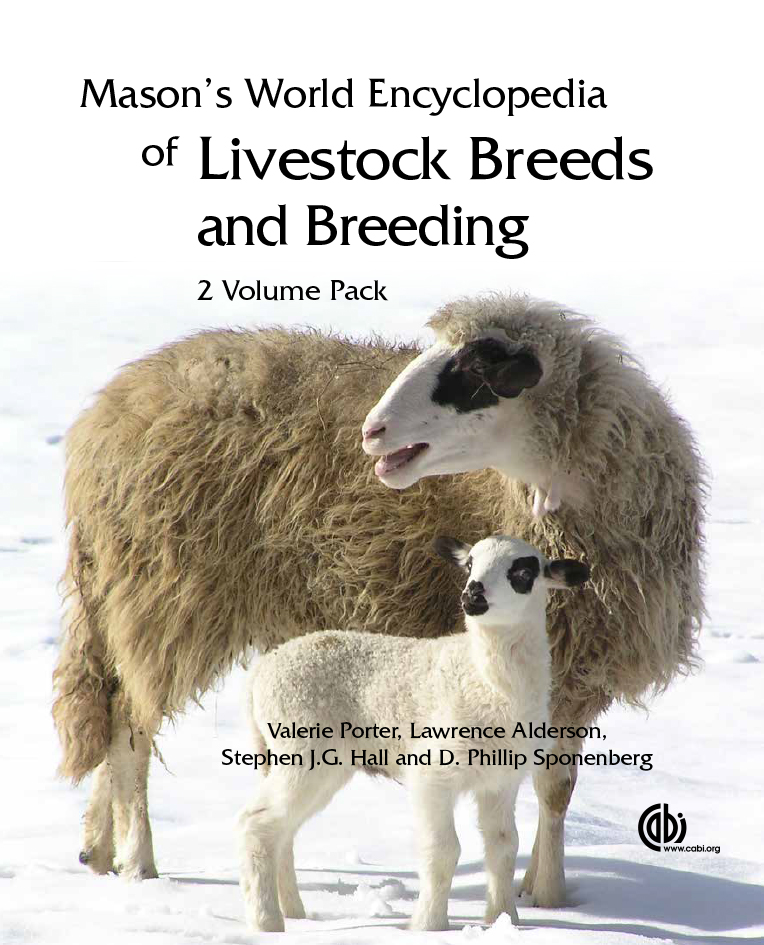 In March 2016, CABI published “Mason's World Encyclopedia of Livestock Breeds and Breeding”, which was written by co-authors (Porter, Hall and Sponenberg). This is a major international and much expanded reference book based on Ian Mason's original book, which includes breeds of domestic livestock. This version covers conservation of animal genetic resources, and, as previous versions, includes both wild and domestic animals and is equally important to both developed and to low and middle income countries.

Prior to publication of this book, Ian Mason compiled and edited four editions of his authoritative book “A World Dictionary of Livestock Breeds, Types and Varieties” since the first edition in 1951.

The fifth edition of this book was revised by Valerie Porter in 2002, and in this edition the original author’s name was moved to the title, “Mason's World Dictionary of Livestock Breeds, Types and Varieties”, an honour which was well deserved.

Mason had a unique reputation in the global livestock world. He worked in CABI, editing research from global scientific literature for Animal Breeding Abstracts (ABA).  According to the author, “A World Dictionary of Livestock Breeds, Types and Varieties” was originally conceived in order to achieve consistency in terminology used in the Animal Breeding Abstracts. The aim of this dictionary was to list the livestock names, which may be encountered in the literature and to recommend one form for English use.

Mason’s books as educational and informational resource on breeds of livestock throughout the World
Mason’s books have been used widely in education and research, and for lobbying by pressure groups or for policy planning in agriculture by various national and international bodies and organisations, such as the UK government or the Food and Agriculture Organization of the United Nations (FAO).

The most recent book on animal breeds by CABI, "Encyclopedia of Livestock Breeds and Breeding", was written by co-authors Porter, Hall and Sponenberg, and is based on Ian Mason's “A World Dictionary of Livestock Breeds”. Although these are still early days, it is expected that this book will become as popular as its predecessor. 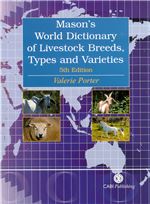 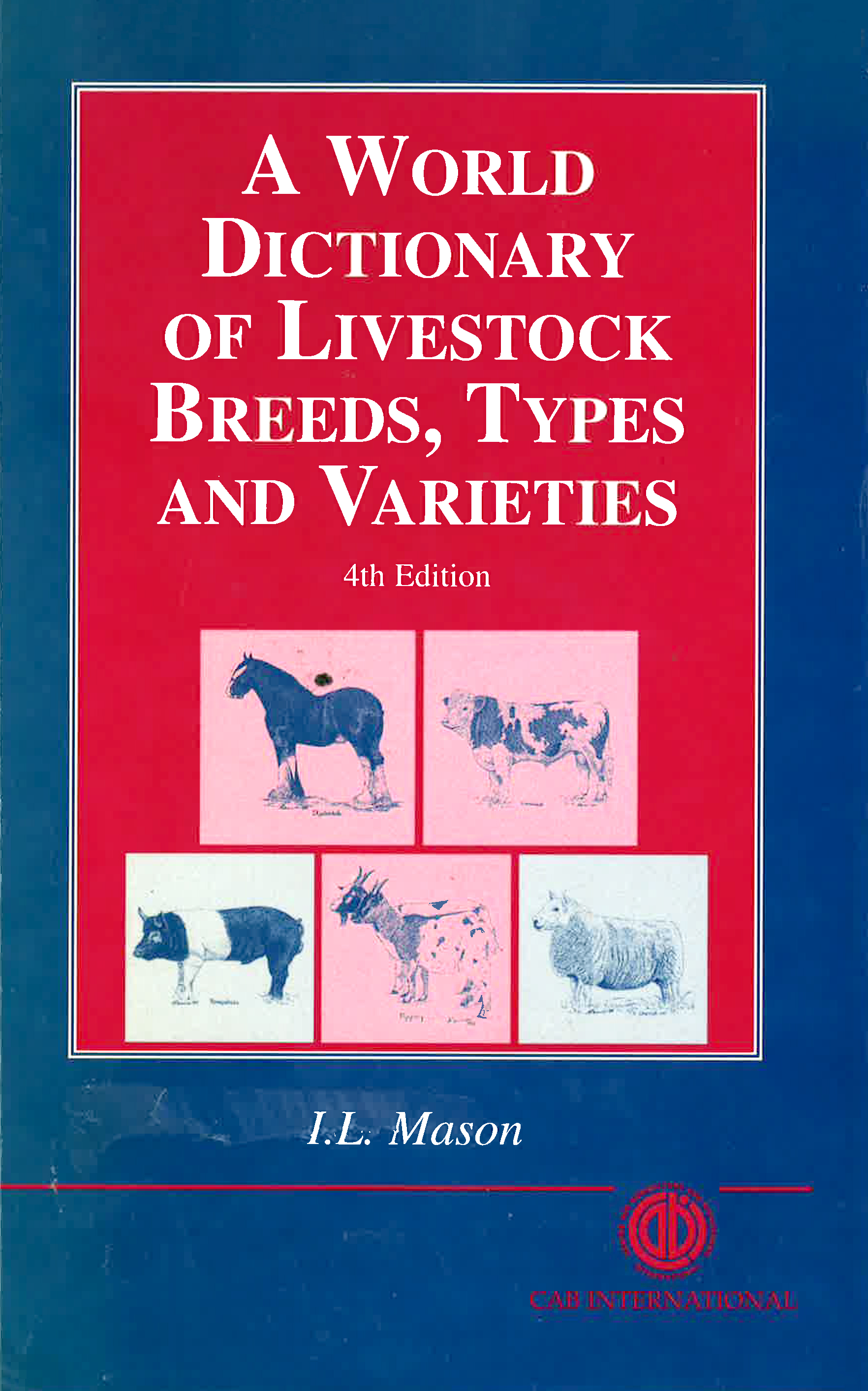 Use in Policy-Influencing on Conservation and Rural Management: Sustainable Farming
An excellent paper on this subject was published by R. Trevor Wilson: “The indigenous domestic livestock of the county of Devon, England”, in Animal Genetic Resources, 2011, 47, 63–77, and this paper is also available on FAO website. This, very engaging paper, advocates conservation of Devon cattle. It cites Mason’s book extensively as supporting evidence throughout the paper; for example, for identifying cattle breeds and synonyms (p. 65), or to illustrate worldwide geographical spread of Devon breeds (p.66), or for identifying sheep breeds (p. 68), to mention but few.

The author concluded that Devon’s ancient indigenous breeds are not historic curiosities. They are, as they have always been, practical weather-proof stock that require the minimum of husbandry and are capable of finding sustenance in distinctly inhospitable surroundings.

These traditional breeds, first described in Mason’s World Dictionary of Livestock Breeds, Types and Varieties, are now recognized by Natural England (sponsored by DEFRA, UK) and can attract some extra area payment as part of higher-level stewardship schemes. This support, together with that of other civic organizations such as the Rare Breeds Survival Trust (RBST) based in the UK, the individual breed societies and their charitable ancillaries together with that of interested commercial and hobby farmers, should ensure survival of ancient breeds for the foreseeable future.

Mason’s Books form a basis of the FAO’s Global Databank for Farm Animal Genetic Resources
Mason’s World Dictionary of Livestock Breeds (1988) was used as an initial information source for the development of the Global Databank for Farm Animal Genetic Resources, which lists the breeds and breed varieties that Mason identified worldwide for seven species (ass, buffalo, cattle, goat, horse, pig and sheep). For each entry the following are provided: the breed name, synonymous names, location and sometimes the origin, physical appearance, main uses and risk status. FAO uses the term breed differently to Mason, to also include breed varieties. Almost all breeds described by Mason were originally entered in the Global Databank for Farm Animal Genetic Resources. Those described as feral or wild were also included, while those referring to an unstable cross between breeds or to a group or collection of breeds were not.

Book Reviews and Endorsements
1. Book review: Mason’s World Encyclopedia of Livestock Breeds and Breeding. Volumes 1 and 2, by Francesco Vizzarri. Journal of Agricultural Science; Vol.9, No 1, 2017. DOI: http://dx.doi.org/10.5539/jas.v9n1p231.
Mason’s World Encyclopedia of Livestock Breeds and Breeding represents a useful and suitable source of complete information on cattle, buffalo, horses, pigs, sheep, asses, goats, camelids and other livestock. These two volumes present a unique, comprehensive and fully referenced guide to finding evidences and reports on domestication (including wild ancestors and related species), potential domesticants, genetics and breeding, as well as cultural and social aspects of livestock farming, genetic conservation and the use of livestock for conservation grazing. Finally, in both volumes, all chapters end with a list of references and further reading. Written and edited by renowned livestock authorities, this livestock Encyclopedia will be an advantageous and helpful tool for scientists and researchers in writing papers, as well as for common reader who wants to learn knowledge and/or curiosities on this interesting topic. Both volumes (1 and 2) of the Mason’s World Encyclopedia of Livestock Breeds and Breeding open with a chapter on breeding, genetics, and conservation, in which author presents interesting cross-link aspects between history and animal science. It is also reported a wide and exhaustive terminology section, useful for the reader to better understand the full encyclopedia.

2. Book Review by Pryor WJ, Australian Veterinary Journal.
"Ian Mason, the author, has made a prodigious effort to keep this dictionary up-to-date in an era when synthetic breeds are appearing with great frequency. The publication is a useful reference for any veterinarian interested in the development and history of livestock breeds. It should also be in all reference libraries which aim to serve veterinary and livestock interests.”

5. Book Review by Hans Lenstra, Utrecht.
"This excellent work of reference on cattle, buffaloes, goats, sheep, pigs, horses and asses has been updated after sending out queries to local experts all over the world and by using the third edition of the FAO World Watch List for Domestic Animal Variety. The result is a dictionary that includes virtually any word referring to a four-legged livestock animal. As the language of the farmers is as diverse as their animals, the list of entrie
s is multi-lingual. For instance, Groningen Whiteheaded is also under Blaarkop and Schweizerisches Braunvieh refers to Swiss Brown. A glossary of terms that in the various languages occur in breed names is included. New breeds are not likely to evolve and it would be a shame if next revisions only witness the replacement of rare variants by the most producing cosmopolitan breeds. In the genomic era we will want to understand the molecular basis of the diversity of livestock. This will be a challenge to us scientists".

From the Publisher
CABI has a long tradition of providing scientific information in the field of animal science, which helps livestock farmers, extension workers, animal scientists and researchers as well as policy makers improve the livelihoods of the world’s poor, and mitigate the impact of large scale livestock operations on the environment.