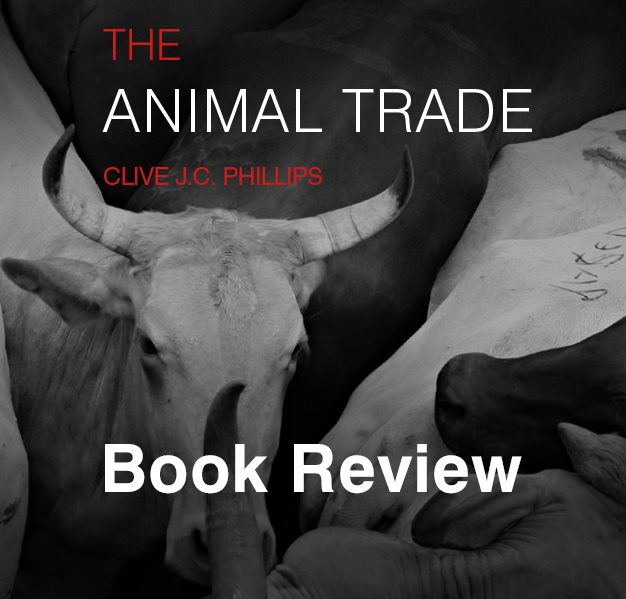 “The Animal Trade” is a book of major importance that will make groundbreaking contributions to the fields of animal welfare and ethics, husbandry, and  government policy, nationally and, hopefully, internationally – as befits the expertise of its author, Clive Phillips. It is scholarly and comprehensive in its sweep, as well as being tightly written, so that the reader is sometimes stunned by the sheer sweep of what has been distilled into one sentence. It is also extremely reader and student friendly, with a clear introduction and conclusion to each chapter, as well as excellent diagrams. Its 10 chapters comprise The History of Animal Trade; Trade Policies for Animal Products; Trade Wars, Sanctions and Discriminations; Trade in Meat; Trade in Some Key Animal Products: Dairy, Wool and Fur; Trade in Live Farm Animals; Disease Transmission and Biodiversity Loss Through the Trade in Farm Animals; Trade in Horses, Cats and Dogs; Trade in Wildlife and Exotic Species; The Future of Animal Trade.

Trade in Live Animals – chapter 6 – is the longest chapter, as befits the sensitivity of the issue, and the 2011 controversy that suspended the Australia-Indonesia live cattle trade – one of the world’s longest trades. Phillips traces the long history of the trade in animals, back to their use as dowry, and the practical implications of long distance transport, describing the different stresses on animals in trucks, trains, ship, and air. The”tyranny of distance”  – a vivid phrase coined by Australian historian Geoffrey Blainey – is graphically demonstrated by the fact that cattle from northern Australia are only able to go by ship from Darwin, as the distances involved – over 2000 km – are too great to transport them to the nearest towns with abattoirs, Geraldton in the west and Townsville in the east.

Lack of refrigerators in village homes and preference for “wet markets” and halal killing further complicate dealings with a developing Muslim country where stunning frequently not practised, and the gratuitous cruelty of animals having eyes gouged, Achilles tendons severed, and being confined in inversion boxes was captured on footage shown to a shocked Australian television public, while Australian-supplied equipment lay idle. Moral revulsion was evoked in the reader at the treatment of these – and other – animals, but the author maintains a matter of fact tone, and is careful to balance moral and economic imperatives. He is in no way partisan. As he points out, laws, standards and guidelines have been developed, notably by the OIE, ACIT, and EU, as well as exporter supply chain assurance schemes, but these are aspirational, and not policed.

As Phillips points out in the Introduction, changing abusive practices requires a knowledge of the facts, and the purpose of the book is to provide this, and to generate change through public pressure, which he deems more effective than legislation – not only slow to achieve, but toothless without real sanctions. He consistently advocates sound agricultural systems that efficiently produce healthy food for the entire global population – not merely the growing middle class, whose increasing adoption of a western diet puts further pressure on the planet’s resources.

One of the most thorny ethical dilemmas raised is the attempted defence of cruel practices on the grounds of “cultural heritage “ – Japanese whaling, elephant tusks, shark fin soup, where the rest of the body is discarded, indigenous Australian practices with turtles, removing body parts progressively from a live animal, the bush meat trade, which attracts human interest because of the biosecurity risk from the difficulty of determining the species of the processed meat.

Another thought provoking challenge emerges in the final chapter, “The Future of Animal Trade”. With the revelation that 1 billion people do not have enough to eat, yet the richest 1% own more than the other 99% by 2016 – this year! That is a recipe for global political and economic instability, as well as moral concern.

Phillips raised the question “Can the public be excused for not knowing about and acting upon the circumstances of animal production?” After all, there have been warnings against using animals as machines since Jeremy Bentham, and for the last 50 years. All too often, improved welfare standards are paraded merely as a marketing tool by some mega food company or supermarket. This book shows how much more is required, and provides the knowledge to transform the animal trade into one that is both humane and sustainable.

This will not be a quick or easy process, and will need excellent resources to frame the debate.  “The Animal Trade” is that much needed book – scholarly, persuasive, balanced, international in scope, and well written -, and it deserves to become  the authority in the area for a very long time.