Author of the month blog: The Animal Trade, Clive Phillips 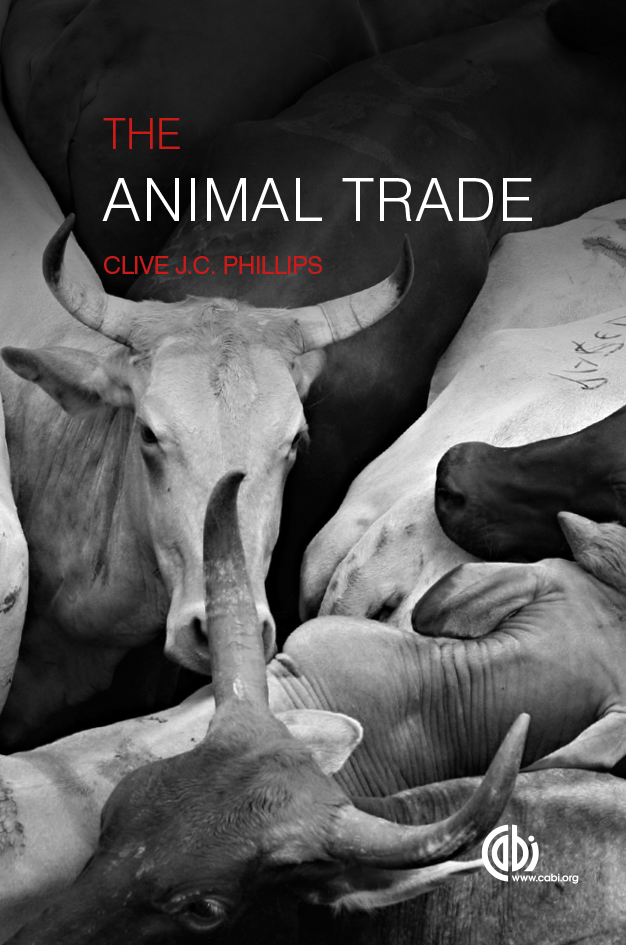 About four years ago, I started to get concerned that the full impact of expansion and intensification of the animal production industries worldwide was not understood, by those in power, by scientists and definitely not by the public. The relatively rapid introduction of intensive farming systems over the last fifty years, and their widespread adoption over many parts of the globe has made many people question the ethics and impact on animal welfare, but no-one has considered the impact from all angles and charted the changes over time, including predictions of what would happen if such trends continued. As well as often displaying a disregard for the animals’ needs, modern intensive animal production systems have major environmental impacts, are morally challengeable, have adverse effects on the health of consumers and use large amounts of resources that are in limited supply, in particular cereals and other staple foods for humans, water and fossil fuels. The trade in live animals, which has been growing with the availability of cheap transport systems, such as by container ship, has additional problems, particularly the spread of diseases both to other animals and to people.

A few years earlier, the Food and Agriculture Organisation predicted that food production must double by 2050 if the current demand increases were to be fulfilled. Assuming that this includes animal products, it became increasingly clear to me that the continued intensification of the industries would have dire consequences. Preliminary research indicated that increased affluence in many Asian countries was increasing the proportion of animal products in the diet, leading to even greater demand and animal industry intensification. The anticipated impact of this on the environment, our health and the animals’ welfare was evidently unsustainable. More recently, the evidence of rising income diversity globally must heighten concern for the ability of the poor to afford staple foods, especially when prices of these increase in response to growing demand for their use as animal feeds.  Since the most rapidly expanding animal production industries, those of poultry and pigs, utilise primarily cereal grains as animal feed, this will put pressure on the price of these feeds.

Charting the growth of our use of animals and expanding trade in animal products, it is evident that these have both in some countries increased exponentially in recent years, prompting me to label this the ‘Animal Age’. In the same way that the use of stone, bronze and iron in human society identified periods in prehistory and history when exploitation of a new resource causes a significant change in society, so our exploitation of animals currently is also changing society significantly. The difference is that, in contrast to our use of new metals, the current changes appear unsustainable, unethical and damaging to our health.

One of the biggest concerns must be the expansion of the live export trade around the world, in conjunction with other products that are increasingly shipped by containers to all quarters of the globe. Whilst this in itself can be a force for good, making products available at affordable costs and bringing different cultures into close relationships that depend on trade, the impact on live animals of long distance travel is clearly negative. Mortality and morbidity are both increased, compared to animals on land, and the stress of being removed from stable groups on the farm and transported in large numbers many thousands of kilometres is significant. Of course, justifications for the trade are many, and in the book I compared these to justifications for the Slave Trade, that shipped millions of people from Africa to the Americas. The remarkable similarities are evidence that what now appear to have been spurious justifications for the Slave Trade may in the future appear to be the same for the Animal Trade.

As well as the impact on the animals, movement of animals is also responsible for a growing number of diseases, some of which challenge humans as well as animals. Whilst the World Organisation for Animal Health (OIE) is attempting to address this through a network of scientists, policy makers and health professionals, the reality is that the escalation of the livestock trade increases the risk of both zoonoses developing and diseases having a major impact on animal industries in the countries to which the livestock are exported.

Although the book concentrates on the intensive animal production industries, it also considers trade involving other animal industries. Some of these have largely come and gone, such as the whaling and sealing industries in the southern oceans, relics of a past when exploitation of these resources attracted less concern than it does today. Lessons can be learnt, and important questions that should be considered are, whether the current concern about the ethics of the growing animal trade is a response to its growth or a sign that we are able to address ethical issues of the day more appropriately than we did in the past, and whether the response is enough. In relation to the latter, we have so far seen little evidence of any attempt by governments to control the growth or address any of the potentially damaging effects, with the notable exception of the growth in activity of the OIE.

Other animal trade is not only growing but having severe effects on the natural world. We’ve lived with transport of non-indigenous species to lands where they outcompete the native species for several hundreds of years. In the short-term, they may replace the indigenous species, but in the long-term they often also contribute to environmental degradation, as they don’t have the advantage of millions of years of adaptation to the ecosystem. Trade in exotic pets, wildlife for food, body parts and medicines is growing and international legislation appears to be unable to effectively control this.

The last chapter attempts to explore what these changes in global animal trade will mean in the future, for human society, for our relationship with animals and for its impact on the planet. Such predictions are always fraught with danger and have been proven wrong many times in the past. In this case I found it easier to predict what would happen than when it would happen. The current trends are clearly unsustainable, but what impact will be most serious and when it will happen proved more difficult to foresee. Pollution from animal production units may cause changes to current policy, but much of the pollution is unseen, e.g. atmospheric, and unaccounted for. In this world where most people have no relationship with the animals that they eat, will animal product consumption patterns change markedly in response to ethical concerns about its production? Similarly, at a time when income diversity is increasing rapidly, would meat production would be constrained to enable a more equitable distribution of adequate nutrients to the poor, in Asia for example? In the past an inequitable distribution of food has brought revolution within a country, which may yet happen in Asia if food shortages intensify, however, much food policy is global rather than confined to a country. The future impact of the animal trade seems uncertain, but it is clear that the impact could be major and should be addressed before it escalates to something we cannot control. The Animal Age should be one in which we recognise our dependence on the species with which we share the planet, not one in which we exploit these species to our own advantage and their disadvantage.

Clive Phillips' The Animal Trade is available to buy at a 20% discount, using the discount code CCAT20 on the CABI Bookshop