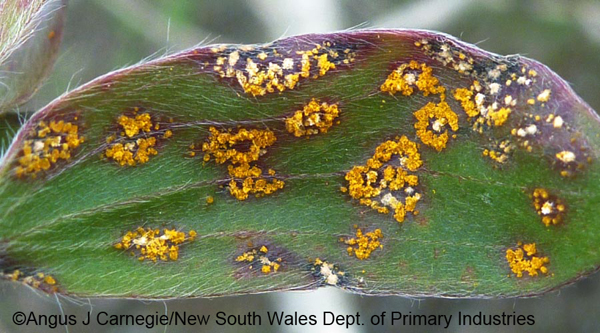 CABI has recently published a comprehensive review and update of its ISC datasheet on the globally important pathogen Puccinia psidii, commonly known as myrtle rust or guava rust. This problematic fungus is of worldwide importance and is capable of infecting a wide range of hosts. To date it has over 440 host species; affecting many plants in the Myrtaceae family, including threatened and endangered species (see IUCN Red List of Threatened Species). Severe impacts have been recorded in amenity plantings, commercial plantations and the native environment.

Once established in a new country myrtle rust can spread quickly and this has been the case in many countries including Jamaica, Hawaii, Australia and New Caledonia. Its successful global and local dispersal through urediniospores and human-aided movement of diseased plants, combined with its massive host range make myrtle rust an effective and devastating invasive. It was first identified as an invasive pathogen in the 1930s when it caused extensive damage to allspice (Pimenta dioica) plantations in Jamaica.

Discussions of myrtle rust impacts and a variety of other forestry related issues are currently underway at the 24th IUFRO World Congress, which is being held from the 5th-11th October 2014 in Salt Lake City, USA.

IUFRO is the International Union of Forest Research Organizations – the world’s forest network. The organisation promotes global cooperation on forest-related research and is composed of over 15,000 scientists from 650 member organizations in more than 100 countries.

The Congress is the largest forest research conference worldwide and is held every 5 years. It brings together delegates from varying forestry backgrounds and this year over 3500 scientists, researchers, graduates, decision makers, policy makers and land managers are expected to attend the event, which is focused on “Sustaining Forests, Sustaining People: the Role of Research”. Over the course of the week a number of plenary, sub-plenary, technical and poster sessions will cover themes, such as:

• Forests and Forest Products for a Greener Future

• Forest Health in a Changing World

Under the theme of Forest health in a changing world, a session dedicated to emerging invasive forest pathogens will see notable speakers discuss the impacts of myrtle rust in the southern hemisphere, including its effects on diversity in both Australia and Hawaii (see p103-104 of the Scientific Program). This session will also focus on ash dieback and the invasive pathogen Hymenoscyphus pseudoalbidus, which causes the disease in ash trees. This pathogen has recently been causing severe impacts across Europe.

For full details of the distributions, impacts, descriptions (and much more!) of both ash dieback and myrtle rust you can access the fully updated and peer reviewed datasheets on CABI’s open access Invasive Species Compendium.

To keep up to date with all the latest news from the 24th IUFRO World Congress click here.