The Cost of Pakistan’s Floods 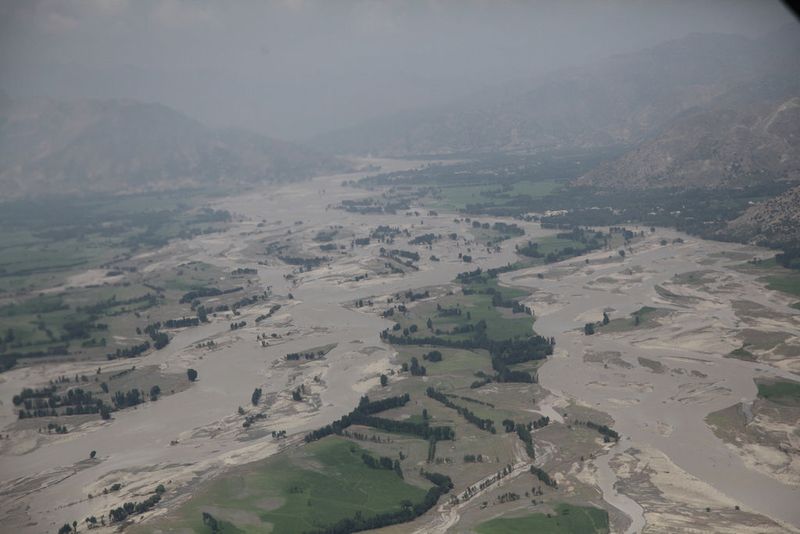 The last 2 weeks have seen the worst floods in Kashmir for almost 50 years. In Pakistan alone, more than 250 people have died and hundreds of thousands have been displaced. The waters currently extend well into the country’s most populous province, Punjab and are due to effect more southern areas in Sindh and Balochistan, very soon. Climate change scenarios predict events like this will be increasingly common, especially in South Asia, where already, there is evidence that the annual monsoon has become much less predictable than in the past. A combination of Pakistan’s agricultural economy, reliance on river-bodies for irrigation and its high number of poor, rural communities, make it particularly vulnerable to the effects of flooding, predicted to become more common under future climate change scenarios.  According to an expert panel convened last month in the Pakistani capital, Islamabad, a combination of lack of political will, poor governance and degradation of natural resources is to blame for the countries current lack of climate change readiness.

The last few years have seen increasingly severe floods throughout Pakistan, in part because of the recent unpredictability of monsoon rains. These floods are having an untold impact on huge numbers of Pakistan’s poor, rural communities, with current reports of more than 700,000 displaced villagers. However, for Pakistan, the effects of future severe flooding go far deeper than the terrible loss of life and destruction incurred, with potentially profound effects on the economy, population health, food security and social issues.

A joint meeting of the International Panel on Climate Change (IPCC) and the Climate and Development Knowledge Network (CDKN) convened last month in Islamabad to discuss the IPCC’s fifth assessment report for South Asia. The meeting highlighted the vulnerability of Pakistan's rural and agricultural communities as well as, in the eyes of many on the panel, Pakistan’s woeful under-preparedness and to deal with the current and future effects of climate change.

Monsoon floods are a common occurrence throughout South Asia, but particularly severe floods have affected various parts of Pakistan in the last few years. 2010 was the last to rival the severity of this year’s floods, with especially high rainfall in the northern province of Khyber-Pakhtunwa (KP). The water then spread south along the Indus throughout Punjab, Sindh and into parts of Balochistan. An unprecedented international relief effort was launched as a result. Around 1/5 of Pakistan’s total land area was underwater by the height of the floods. Some estimates have put the total cost to Pakistan’s economy of those floods as high as $43 billion.

The IPCC report focuses on changes in monsoon rains as a key factor in the growing flood risk. This year was both a late and very heavy monsoon for Pakistan. By the time the rains came, the ground was even more parched than usual, and less able to absorb the deluge into ground water, swelling rivers more rapidly than usual. But environmental degradation has an important part to play as well. For more mountainous and forested areas like KP and Kashmir, long term and widespread deforestation is thought to have played a significant part in worsening floods. Forests play a vital role in absorbing heavy rains through a number of processes, especially in providing build-up of leaf litter and other detritus, on the forest floor. This helps prevent rapid water run-off that could swell rivers and streams to dangerous levels.

However, as report co-author Adil Najam pointed out at the Islamabad meeting, vulnerability to climate change events is determined by the resilience, infrastructural capacity and recovery ability of those most affected, in Pakistan’s case, a large population of relatively poor small-holder farmers.  Pakistan is essentially an arid country. Agriculture is made possible throughout most of Punjab and Sindh by a vast system of irrigation canals and rivers fed by snow melt in the Hindu Khush as well as monsoon rains. Almost all farming (60-80%) in Pakistan relies on irrigation canals from these water sources. The vast majority of farmers are relatively poor small holders with less than 10 hectares of land, often growing crops like rice, wheat and maize as well as commercial crops like cotton. The result is farmers find themselves in a double bind regarding flood risk. They rely entirely on irrigation for their livelihoods but these are the exact areas most prone to flooding. The poverty of these millions of farmers is the major factor in Pakistan’s vulnerability.

Experts at the IPCC meeting, along with a multitude of senior academics in climate and agricultural sciences in Pakistan have been highly critical of the government’s lack of flood preparedness. In a recent article for Dawn Newspaper, Zafar Altaf, former chairman of Pakistan Agricultural research council criticised the “total lack of planning” and leaders' reactive approach to flooding.

However, there are wider economic effects of current and future floods. Firstly, flood waters do not subside for at least 2 or 3 months, preventing farmers from sewing crops on which they will rely in the following year. The wider economy is also centrally reliant on agriculture. Major crops like rice, wheat and maize contribute substantially to food security and exports. But, Pakistan's economy is highly reliant on its largest industry, textiles, which in turn is fed by the almost 3 million small holder cotton farmers, that provide the majority of its raw materials. Crop diseases, pests and lack of government regulation means that farmers yields are already down to the point where the industry is forced to import millions of bales of cotton each year in order to meet demand.

The direct burden of floods on agriculture is made heavier by their effects in other sectors, such as power. Pakistan has ongoing electricity supply problems, with most areas only receiving power every other hour. With the current floods, cuts of more than 12 hours are commonplace, even in major cities like Lahore. Industry that relies on processing or refrigeration must either shut down or pay for expensive diesel generators to cover the intervening period, something only the very largest companies can afford to do.

The IPCC expert panel call on the Pakistani government for much greater political will and focus on climate change readiness. Specifically, they also recommend coordination between various government departments, like agriculture, power and water as an important measure. Panel member and IPCC report co-author, Edvin Aldrian also identified the need for a monsoon monitoring system to better predict flood risk in the future. The main message of the panel was the need to build the capacity of the nation’s poor farmers to, not just cope with the after effects of flooding, but to try and mitigate them, building farmer’s capacity.

Pakistan needs political will in face of climate threats – experts