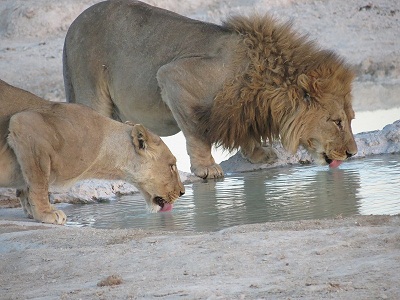 Large carnivores, from lions to polar bears, are among the most iconic and charismatic species on earth. They also play vital roles in many ecosystems, restricting populations of herbivores from reaching levels where they degrade vegetation and prevent woodlands and forests from regenerating. But the world's top carnivores are in big trouble, with over three-quarters in decline and more than half now present in less than half their historical ranges. This is the message from a review paper published in Science yesterday. And the paper comes just a few days after another study found that the genetically-unique West African lion is down to just 250 breeding adults.

"Globally, we are losing our large carnivores," says lead author of the Science study, William Ripple, from Oregon State University. "Many of them are endangered. Their ranges are collapsing. Many of these animals are at risk of extinction, either locally or globally. And, ironically, they are vanishing just as we are learning about their important ecological effects."

The paper looked at 31 large-bodied (over 15 kg weight) carnivore species. The researchers found that found that they were under increasing pressure in the Amazon, South East Asia, southern and East Africa.

Much of the decline is associated with impacts of man. Carnivores suffer from habitat loss, poaching, and hunting by livestock farmers who fear their predation on domestic livestock as farming increasingly comes into conflict with wild animals. Other human-associated impacts include climate change, and transmission of diseases between wild and domestic animals. But carnivores play important ecological roles, and in some cases their loss can cause more problems for farmers than they solve. For example, the rise of olive baboons in Africa has been linked to the decline of lions and leopards. But the baboons now pose a bigger threat to farm crops and livestock than elephants.

Carnivores can help keep wild herbivore populations healthy by preying on weak and sick animals. By keeping populations in balance with their environment, they can also reduce overgrazing of vegetation by herbivores which increases the carbon sequestration capabilities of habitats and in turn assists with ameliorating the impacts of climate change. The lack of top predators in Western countries such as the UK is a contributing factor in an explosion of deer populations which threatens native woodlands by preventing establishment of new seedlings.

Probably the most famous example of the importance of top predators comes from Yellowstone National Park. The reintroduction of wolves into the park in the 1990s has had massive impacts on the ecosystem. With the return of the wolves, elk behaviour changed significantly: instead of browsing out in the open, they took to the forests for protection. This allowed trees to grow unimpeded in many parts of the park where they had been overgrazed for decades, including along river and stream beds.

The scientists say that much of the problem comes from an old fashioned notion that predators are harmful and just a threat to other wildlife. The authors say there needs to be a rapid recognition of the complex roles these carnivores play and how much they are worth in economic terms. And when people try to replicate the services provided by these animals, they aren't as effective.

"Human tolerance of these species is a major issue for conservation," Prof Ripple said. "We say these animals have an intrinsic right to exist, but they are also providing economic and ecological services that people value."

"Promoting tolerance and coexistence with large carnivores is a crucial societal challenge that will ultimately determine the fate of Earth's largest carnivores and all that depends upon them, including humans," the scientists conclude.