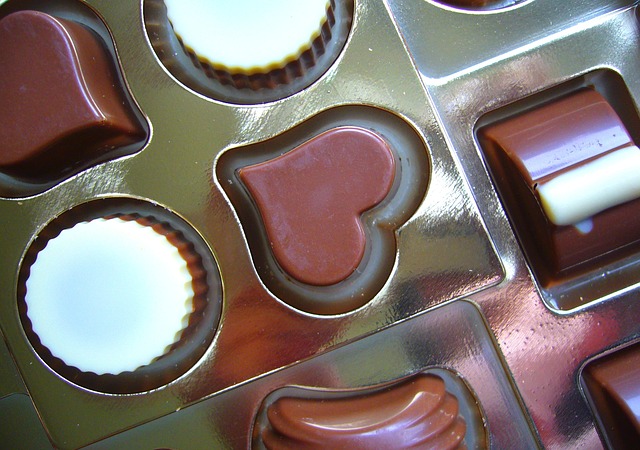 According to the BMJ this week, the average half life of a chocolate in a busy hospital ward is 51 minutes with some brands lasting longer than others. They last rather longer in my quieter office but still we have eaten a few in the run up to Christmas.

What if the food industry could create a guilt free chocolate? I expect the half life would decrease because the guilt factor would be reduced.

The holy grail for the chocolate industry is a low fat version of chocolate that still has the texture and taste of the full fat version. An article in Christmas New Scientist  by Caroline Williams spreads hope that the industry might be getting somewhere. She even gives a recipe to try at home – its that simple.

The key is agar, the popular thickener used in vegetarian jelly. It solidifies at the same temperature as chocolate if you get the conditions right and it disperses in melted chocolate in bubbles that are small enough not  to be detectable by the mouth. Researchers at Warwick have found that agar can be used to replace up to half a bar of chocolate without being detectable. The result is the same sized bar with half the fat by volume. Agar has a bonus because it contains soluble fibre which helps feelings of fullness.

What would we call this new "chocolate" though? I remember one European Union discussion where chocolate  containing fat other than cocoa butter was threatened with being labelled vegelate.

The original research can be found in this paper: High internal phase agar hydrogel dispersions in cocoa butter and chocolate as a route towards reducing fat content.

Could seaweed help cut fat in your chocolate? Scientists develop alternative that use microscopic agar bubbles to bulk out the treat