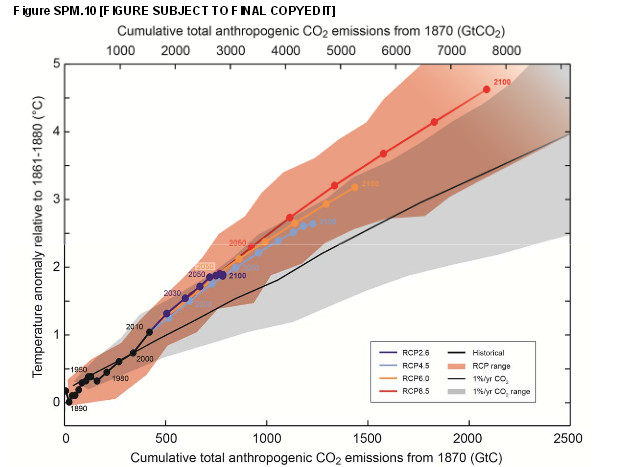 The much anticipated Intergovernmental Panel on Climate Change (IPCC) 5th Assessment Report on Climate Change was released today. In fact, what was released is the summary report for policymakers, which was produced by the IPCC’s Working Group I, and aimed to present the findings as clearly as possible. The full report will be released in unedited form on Monday, 30th September 2013 and will be available in the IPCC webpage.

The IPCC Assessment Report on
Climate Change was first published in 1988 and is the most
authoritative document on climate change there is. The latest, fifth,
report is going to be published in two parts: the first, which is to be
published on the 30th of this month, reports on the physical science of climate change;
and the second and third parts on the impacts and what to do to mitigate
or adapt to climate change will be published next year. The reports draw on millions of measurements that give an unbiased view of the state of the Earth System, said the press release. For the first time, the report will include an Atlas of Global and
Regional Climate Projections, which provides projections of future
climate change in both the near and long term.

I expected that the latest report was likely to state with even greater
certainty than before that present day rapid warming of the planet is
caused by man’s activities that release greenhouse gases (GHG). Indeed,
the summary report began by stating that "It is extremely likely that
human influence has been the dominant cause of the observed warming
since the mid-20th century. The evidence for this has grown, thanks to
more and better observations, an improved understanding of the climate
system response and improved climate models."

Key findings of the report with regard to observed changes in the climate system:

With regard to drivers of climate change, the report found that total
radiative forcing is positive, and has led to an uptake of energy by the
climate system. The largest contribution to total radiative forcing is
caused by the increase in the atmospheric concentration of CO2 since 1750.

The report also presents the projections of changes in the climate system, which
were made using a hierarchy of climate models ranging from simple climate
models, to models of intermediate complexity, to comprehensive climate models,
and Earth System Models. These models simulate changes based on a set of scenarios of anthropogenic forcings. A new set of scenarios, called the Representative Concentration Pathways (RCPs), was used for the new climate model simulations. The projections are discussed based on the different
scenarios of GHG emissions. It is not surprising that the report points out that
"continued emissions of greenhouse gases will cause further warming and changes
in all components of the climate system. Limiting climate change will require
substantial and sustained reductions of GHG emissions."

The huge accumulation of anthropogenic CO2 in the atmosphere is shown in the above diagram, which was taken from the IPCC 5th Assessment Report (Figure SPM 10). The diagram shows global mean surface temperature increase as a function of
cumulative total global CO2 emissions from various lines of evidence.
Multi-model results from a hierarchy of climate-carbon cycle models for
each RCP until 2100 are shown with coloured lines and decadal means with dots.

The CABI internet resource 'Environmental Impact' contains a large collection of publications on the IPCC and on climate change, as shown in my search, linked here for the benefit of the subscribers to the database.

Link to the IPCC press release.

Link to the IPCC 5th Assessment Report summary for policymakers.