Welcome to the latest CABI Author Focus. This month Melissa A. Austin tells us how her 20 years of teaching experience has informed the recently published textbook, Genetic Epidemiology: Methods and Applications.

“Does your new book have 10 or 11 chapters?” a colleague of mine at the University of Washington (UW) Graduate School asked when he heard about my forthcoming textbook, Genetic Epidemiology: Methods and Applications. “How did you know, it has 11 chapters,” I replied. He said he was initially puzzled by the fact that, of the many textbooks he had read by UW faculty, they all had 10 or 11 chapters. Then he realized that there are ten weeks during quarter of teaching at UW. Add an introductory chapter, and there are 11 chapters! Sure enough, that describes how this book came about, based on over 20 years of teaching genetic epidemiology, the interdisciplinary field that integrates human genetics and epidemiology, to UW graduate students.

Genetic epidemiology research methods are key to discovering how genetic factors influence health and disease, and to understanding how genes and environmental risk factors interact. Innovations in genomic technology, recent statistical and computational developments, the availability DNA samples and environmental data from large population-based and family studies, and the application of rigorous epidemiologic study designs using these resources, have resulted in rapid advances and growing interest in this field.

“Are you planning a second edition of Fundamentals of Genetic Epidemiology?” I asked Muin Khoury, Director of the Office of Genomics and Public Health at the Centers for Disease Control and Prevention, and the lead author of the now classic textbook published in 1993. That book has been used by countless public health researchers to design, implement, and analyze the data from genetic epidemiology studies. No, he responded, and after 20 years, a new, comprehensive book is urgently needed. As he later wrote in the forward to the new book, “Prior to the genomics era, the field consisted primarily of population and statistical geneticists, and a few epidemiologists interested in searching for the genetic basis of human disease. Today, the thriving field of genetic epidemiology is integrated into clinical and public health research.” Terri Beaty, another 1993 author, contributed to the current textbook, writing portions of two chapters. (Bernice Cohen, the third author of the 1993 book passed away in 2011, after a distinguished career at Johns Hopkins University).

Overall, the goal of the new textbook is to provide students with a contemporary working knowledge of the fundamentals of genetic epidemiology research methods. Following an overview of the discipline, the next 6 chapters (weeks!) begin with review key genetic concepts, provide an update on relevant genomic technology such as genome-wide SNP chips and DNA sequencing, and  describe methods for assessing the magnitude of genetic influences on diseases and risk factors. Then, the book focuses on research study designs for discovering disease susceptibility genes, including family-based linkage analysis, candidate gene, genome-wide, and rare variant association studies, assessing gene–environment interactions and epistasis (gene-gene interactions), and statistical analyses of data from these studies. Specific applications of each research method are illustrated using a variety of diseases and risk factors relevant to public health.  Local Seattle colleagues from the Fred Hutchinson Cancer Research Center and from the UW, many of whom have given guest lectures in the course for several years, made important contributions to these chapters, including Barbara McKnight, Bruce Psaty, Steve Schwartz, and Janet Stanford. Long time colleagues who are too far away to lecture were still willing to help write these chapters, included Terri Beaty (Johns Hopkins University) and Ruth Ottman (Columbia University).

“The book will be out of date as soon as it is published,” commented one of the books coauthors as he was completing writing his chapter.  Although this is inevitable for a field as dynamic as genetic epidemiology, many fundamental concepts remain highly relevant to the field, and can be newly interpreted in the “omics” era. For example, the notion of “heritability” (the proportion of variation in a disease or risk factor attributable to genetic influences) was developed long before the word “genomics” existed, and is now essential to determining the contribution of genetic variants found to be associated with disease in genome-wide association studies (GWAS).  The statistical genetic analysis approaches originally developed to examine single major gene effects in families (segregation and linkage analysis) have evolved into methods using exome sequencing data to identify rare variants causing Mendelian diseases. The principles of genetic association analysis first developed in candidate gene studies, including the role of indirect association due to linkage disequilibrium and bias due to population stratification confounding, are being examined in both GWAS and DNA sequencing studies, most recently in studies using extreme trait sequencing.  Statistical and biological models designed to describe the complexities of gene-environment interactions and epistasis can now be applied to the extensive data available from large-scale, international, collaborations to identify combinations of genetic, behavioral, dietary, and environmental factors that contribute to health and disease.

The final 4 chapters of the book describe completely new areas of genetic epidemiology that have emerged in the last two decades:

Once again, both local and distant colleagues with wide ranging expertise contributed to these chapters: Steve Schwartz from the Fred Hutchinson Cancer Research Center, Timothy Thornton, Stephanie M. Fullerton, and Kelly Edwards from the University of Washington, and Marta Gwinn and W. David Dodson, both affiliated with the Office of Public Health Genomics at the Centers for Disease Control and Prevention.

To conclude, quoting once again from Muin Khoury’s forward, “I am confident that the book will be a great resource for researchers, students and practitioners from multiple scientific disciplines.” 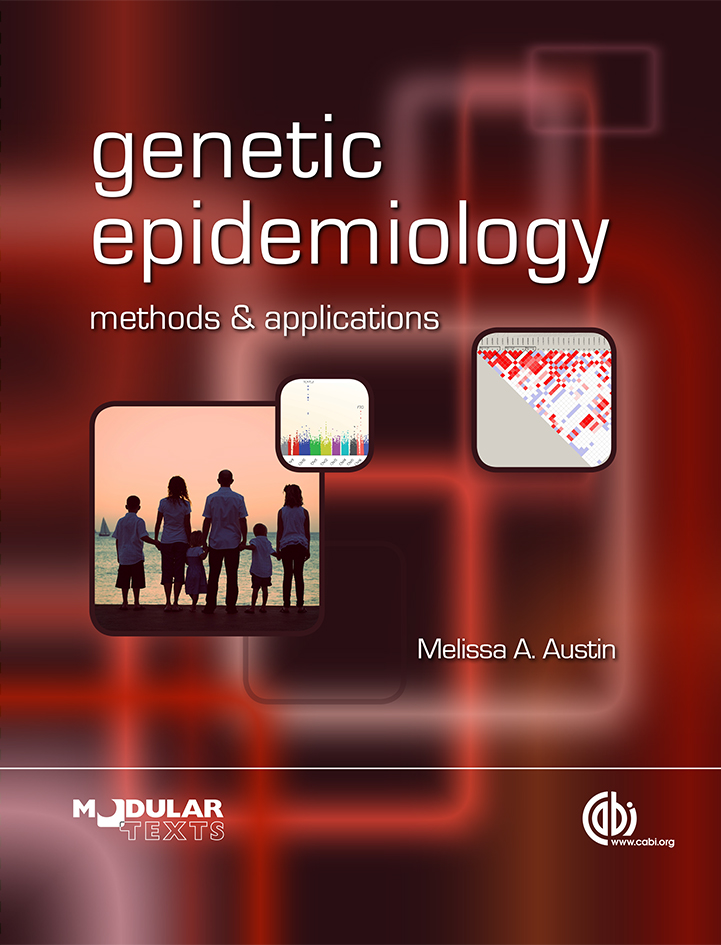 Visit the CABI bookshop for more information on Genetic Epidemiology by Melissa A. Austin