What happens to the waste left after the Glastonbury Festival? 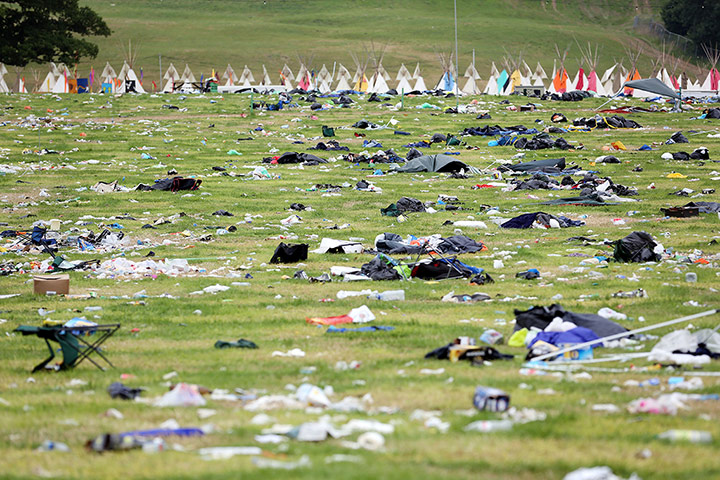 (Photograph by Graeme Robertson for the Guardian.)

Summer music festivals are popular as ever, with nearly 900 festivals taking place in the UK alone in 2012 (efestivals),
compared with 465 in 2007 - an increase of almost 50% in five years.
Whereas before people who stayed in the site for more than a day and
therefore camped, would pack up and take their tents back home, it is
now a common custom to leave the muddy tents behind, as well as
wellington boots and even items of clothing, for the organisers to
dispose of. Read on to find out how organisers are dealing with the waste left behind.

In 2012, half of all waste generated by the festival was recycled and
the organisers are hoping to increase waste recycling to 60% in 2013.
This is achieved with the help of a recycling crew of 1,300 volunteers
that contribute to the sustainability of the festival. All cans, glass,
paper, electrical and electronic equipment, wood and organic waste are
separated and recycled as locally as possible.

Some 1,200 volunteers work for a ticket and the other volunteers for
their nominated charity like WaterAid, Kiota and Bhopal Medical Appeal.
The money that they earn gets donated to the charity they are working
for. Without them we wouldn’t be able to achieve the recycling rate that
we reach, said the organisers.

Although the organisers encourage participants to take home as much of
what they brought in with them as possible, as I mentioned above many
people leave not only their rubbish behind, but also tents, wellington
boots and even clothing. According to the festival’s website, it costs
the festival £780,000 to dispose of all the rubbish left by the festival
goers at the festival site. That’s £780,000 less to Water Aid,
Greenpeace or Oxfam – the main recipients of any profits made by
Glastonbury. With £780,000, Water Aid can enable 52,000 people to have
access to safe water, improve hygiene and sanitation, the organisers
pointed out.

Link to the Glastonbury Festival website, with information on how
organisers are dealing with waste and on measures to make the festival
greener.