Eating insects to save the planet: would it really help? 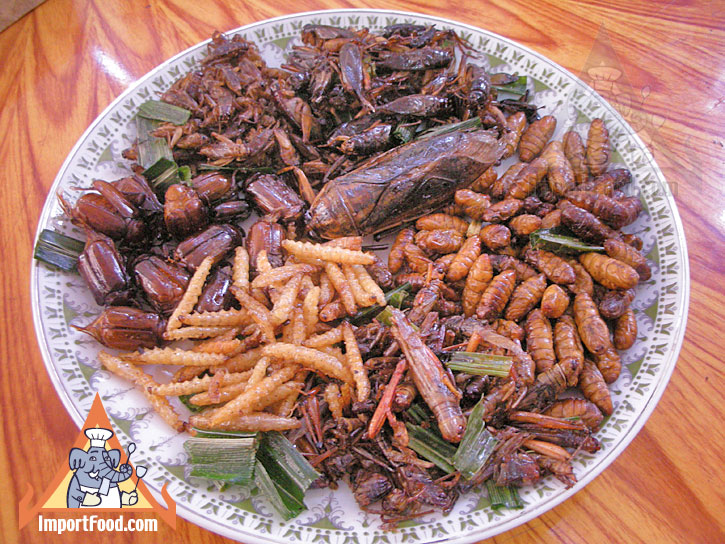 It was well
publicised in the media last week that we have reached the feared 400 ppm
carbon dioxide (CO2) concentration level in the Earth’s atmosphere. The World
Meteorological Organization (WMO) reported in a press
release last week that the 400 ppm threshold was recorded at several stations of the World
Meteorological Organization’s Global Atmosphere Watch network, and the threshold was reached earlier than the predicted
2015-16. The press release shows some dramatic graphic representations of the
changes in CO2 concentrations from ice core determinations, for the
last 800,000 years and 300 years, and from instrument measurements at Mauna Loa for data since 1957.

An article in the Economist entitled 'The measure of global warming' summarized the situation with regard to the implications for global warming:  “As a rule of thumb, CO2
concentrations will have to be restricted to about 450 ppm, if global warming
is to be kept below 2°C (a level that might possibly be safe). Because CO2
stays in the atmosphere for decades, artificial emissions of the gas would have
to be cut immediately, and then fall to zero by 2075, in order to achieve
450ppm. There seems no chance of that. Emissions are still going up. At current
rates, the Mauna Loa reading will rise above 450ppm in 2037“.

Agriculture production, especially livestock farming is
responsible for around 30% of CO2 emissions. According to a
United Nation’s report entitled Livestock's Long Shadow: Environmental issues and options, the livestock sector alone is responsible for 18% of the world’s total emission of CO2 and
methane, which is more than the emissions produced by the transport sector,
i.e. every plane, train, car, truck and other mode of mechanical transportation
on the planet, which accounts for 13% of greenhouse gas emissions.

When we think about reducing carbon emissions, as
individuals we tend to think about recycling, driving less, switching to energy
efficient appliances and light bulbs. When asked what we can do as nation, most
people would suggest introduction of policies to promote adoption of renewable
energy source and leaving the forests alone. Although all these measures are
important contributions to reduce carbon emissions, shouldn’t we be doing more
and taking more drastic measures to save the planet from global warming?

We are all familiar with the suggestions that more people should become vegetarians or demitarians to reduce GHG emissions from meat production. However, for those who would not entertain the idea of giving up animal protein, there is a new thing "insectarianism". Although I made up the term, the concept is quite real and not a new thing either – it is called entomophagy, defined as the consumption of insects by humans as food.

At present, an estimated 2 billion people globally eat
insects, primarily in Africa, Asia, and Latin America, where the practice dates
back to around a thousand years, according to a new book by the Food and
Agriculture Organization (FAO) released last week entitled Edible insects: future prospects for food and feed security. The most widely consumed
species include beetles, caterpillars, bees, wasps and ants. Some advantages of
insects over livestock include: insects provide the equivalent amount of protein of beef cattle, while emitting
much less GHG; they cost a lot less to produce than livestock; they are
taxonomically distant from humans, which makes them less likely to transmit
diseases; and they are ubiquitous to almost all environments.

The FAO reports that “edible insects have always been a
part of human diets, but in some societies there is a degree of distaste for
their consumption.” Although the majority of edible insects are gathered from
forest habitats, innovation in mass-rearing systems has begun in many
countries, the book says.

The FAO book is an effort of the FAO’s Forestry Department
to recognize the traditional practices of gathering insects for food and
income, and to document the related ecological impacts on forest habitats. It draws on a wide range of scientific research at Wageningen
University, The Netherlands, on the contribution that insects make to
ecosystems, diets, food security and livelihoods in both developed and
developing countries. This would
decrease demand for beef and other meats and eventually reduce the amount of
land dedicated to meat production, solving the global food crisis and reducing carbon
emissions from meat production.

The Ecologist magazine online has an interesting article entitled ‘Eating insects: a solution to the meat problem?’ which shows how eating insects was a common practice in Mexico many thousands of years ago. It was such a natural thing that they didn’t even have a name for insects and called them simply “the meat we eat”. However, when the European arrived there they found it a barbaric pagan practice.

I’m
so glad I’m a vegetarian!

Climate change: The measure of global warming. The Economist. May 2013.

Eating
insects: a solution to the meat problem? The Ecologist. August 2010.

Reducing hunger and undernutrition – how are we doing?

UN: Eat more insects; good for you, good for world