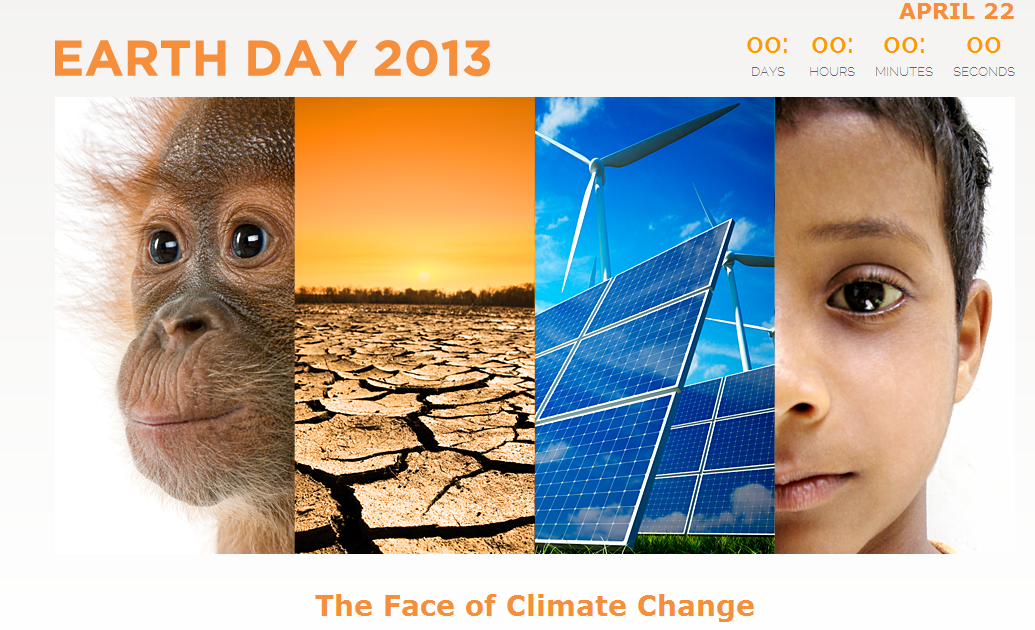 The Network has been collecting images of people, animals
and places affected by climate change, and stories with images of people doing
their part in the fight against climate change. During the days surrounding
Earth Day, an interactive digital display of all the images has been shown at
events worldwide as people continue to upload photos of their actions in
real-time.

“This interactive mosaic is depicting the very real impact
that climate change is having on people’s lives and uniting Earth Day events
around the world into one call for climate action,” said Franklin Russell,
director of Earth Day at Earth Day Network. “The stories we’ve collected so far
have been inspiring.”

According to the Earth Day press release over one billion
people in around 192 countries are taking action to protect the environment, by
mobilizing their communities and helping depict the Face of Climate Change. The
actions taken by groups of people and organisations range from the action taken by Google, who is marking the day with the ‘Google
doodle’ that shows a set of many images used in articles, websites and blog
posts to celebrate Earth Day over the years, to that of a Junior
High School in Kaosiung, Taiwan, which is taking part in a community clean-up as part of
their environmental education class.

Earth Day has become a big event and each year more people of all
ages and backgrounds come together and do tasks like cleaning up beaches and
coral reefs, showing films, drawing petitions, and marching to solve the
climate crises. More than 100 million schoolchildren around the world learn
about the importance of clean air and water, says the press release.

The day to raise awareness of the Earth was created in the USA in 1970, with Gaylord Nelson being the main person behind it,
to "activate individuals and organizations to strengthen the collective
fight against man's exploitive relationship with the planet." Although a
lot has been achieved to save the planet's resources through actions and awareness raised
during Earth Day over the past 43 years, there’s still a lot that need to be
done to encourage people to adopt behaviours in their everyday lives to help to save the Earth’s resources. Earlier this year an
article in the Guardian online showed that public concern for environment is at
its lowest in 20 years in 12 countries, according to an international poll.

The Postcode Lottery Green Challenge, chaired by Richard Branson, has launched a competition which aims to find a product or service that will reduce greenhouse
gas emissions and is capable of being brought to market within two years. He says “I encourage everybody around the world with a great green idea to enter this
prestigious contest. One smart, creative idea can make a huge difference.”

Spring is here, in the northern hemisphere that is, and the
US EPA has some tips for a more environmentally-friendly spring cleaning in
their blog page, which includes suggestions such as giving to charity items
such as clothing gathered during that wardrobe clear out, ‘one man’s trash is
another man’s treasure;’ using biodegradable and eco-friendly labelled cleaning
products; and conserving water by using alternative water such as rainwater
from a rain barrel to water the garden, which not only can cut down on wasted
water but also lower your water bill.

CABI’s internet resource, Environmental Impact, was created
with environmental protection in mind, and comprises a single comprehensive
bibliographic information resource on climate change and other influences of
humans on the biosphere. It also covers other aspects of human damage to the
environment such as pollution, deforestation, desertification, and habitat
loss. Follow the link above to check it out and click on the ‘request a free trial’
tab on the left hand side of the page to try it out.

Link to vies The Face of Climate Change video and photos.

Link to see highlights from The Face of Climate Change and
Earth Day events around the world.

What is happening in this year's Climate Week: 4-10 March 2013?
Environmental Sciences