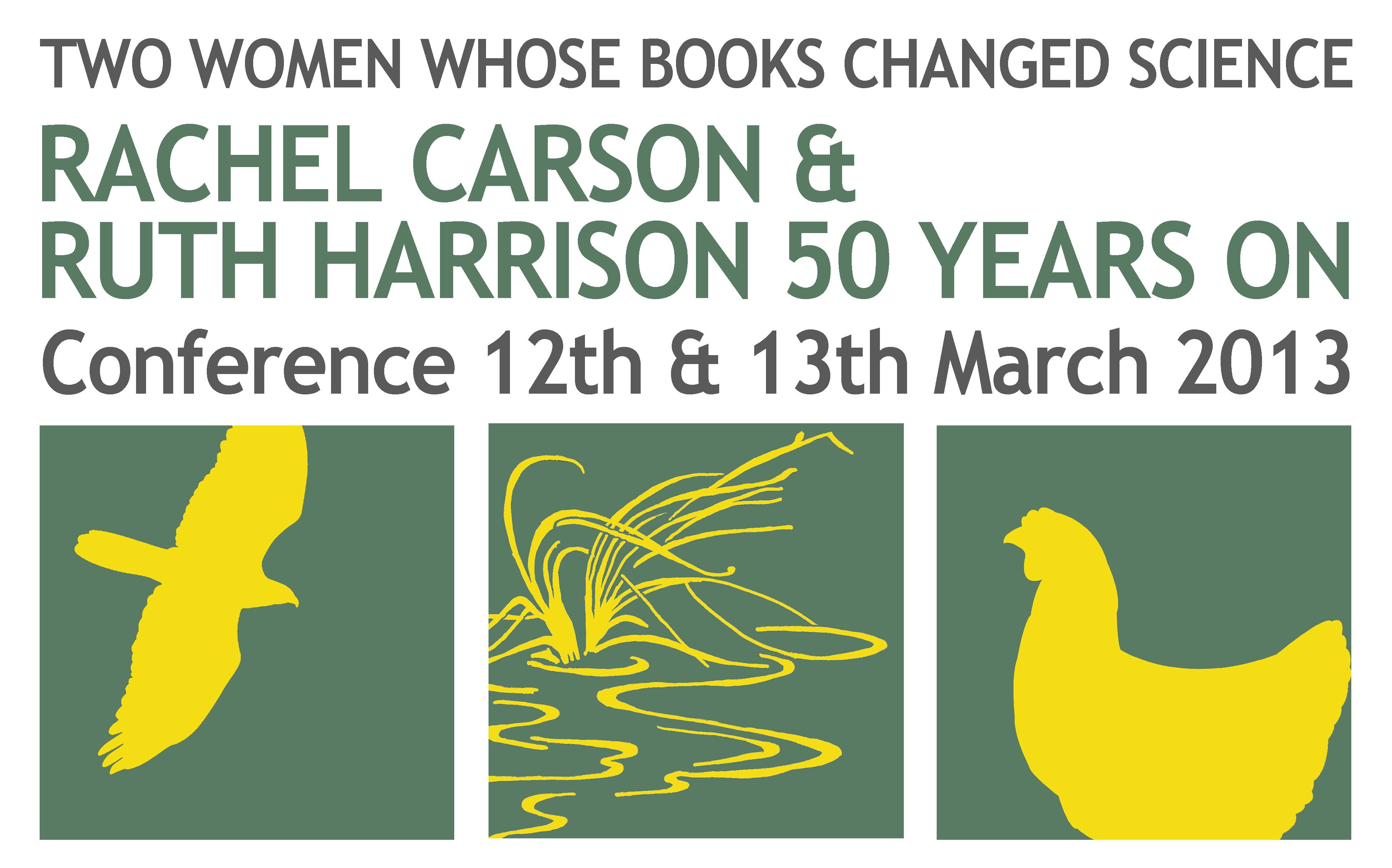 Rachel Carson has sparked the modern day environmental
movement with her book Silent Spring
published 50 years ago and Ruth Harrison’s book Animal Machines, also written 50 years ago, alerted
the public to the undeniable suffering of calves living in veal crates and
birds in battery cages. The second and final day of the conference revisiting
these two books was about the current challenges of conservation and animal
welfare and what the future holds. The two sessions comprised five
presentations:

Prof. Dan Weary’s, University of British Columbia,
presentation was entitled ‘Animal welfare on larger farms: issues and
opportunities’. He pointed out that large farms use data to make decisions, so
why not to use it to improve welfare. He said that larger farms seem to
provide better welfare for animals through quality staff and treatments.

Dr. John Jensen, Dept. of Bioscience, Aarhus University, presented
‘Environmental impact of veterinary medicines: how do we balance animal welfare
and environmental protection?’ He gave
research results of various environmental impacts of veterinary medicine. He
said there is potential risk of Veterinary Medicinal Product (VMP), such
as the harm to algae, but that the most important issue is the spreading of
resistant bacteria. The impact of these on the environment is still not well known.
He concluded that VMP may reduce common diseases, but on other hand it allows more
intensive farming which has welfare implications. He asked the question: how do
you balance welfare and environment protection? The answer is to evaluate case
by case; to realise there are other medicine available. However, there is no money being
invested in veterinary medicines at the present, which is a big problem, he added.

Prof. Sten Stymne, Swedish University of Agricultural
Sciences, presented ‘How gene technology can help to reduce the environmental
imprint of agriculture’. Although genetically modified crops met resistance
from the public, i.e. the public has a romantic vision of agriculture which
influences their scepticism about GM crops, he pointed out that no scientific
study has shown negative health effect of GM crops. Examples of the
environmental benefits of GM include herbicide resistant crops that need no
tilling, so kinder to the environment. But gene technology can do so much more
than just the insecticide and herbicide resistance traits, he added. A number
of genes are known to regulate important properties of plants, such as drought
resistance. Another example of what is being done using genetic engineering is
perennial crops that can sequester carbon from soil – for example the root
system of GM winter wheat Thinopyrum
intermedium could bring CO2 levels down to pre-industrial levels, if all
agricultural land were to be planted with these. He also pointed out that we will
need to double plant oil production in the next 40 years. We need to find
a genetic switch to get plants to produce oil instead of sugars, he said. Current
oil crops produce around 5 tonnes of oil per hectare, while domestication of
broad leaf herbage could increase oil production to about 8 ton/ha. However, no
public money is being invested in plant breeding now as in the past.

Mike Gooding, FAI Farms, Ltd, presented ‘Building ethics,
environment and economics into business’. He gave some livestock farming facts
and figures: it employs 1.3 billion people, (55% of labour force in developing
countries); it provides 27.9% of human protein (47.8% in developing countries).
He stated that if we are serious about feeding people, we better grow more for
direct human consumption rather than animal feed. He said the majority of
farmers understand sustainable intensification as simple intensification and that
needs to change. He discussed the three Es: Environment (available resources),
Ethics (acceptable production methods) and Economics (affordable food). They
are all 'and', not 'or' – they need to come together. He ended asking the
question: What do we want from business? Answer: healthy farming systems,
supported by healthy ecosystem, delivering healthy food for all.

I think large manufacturing companies should, and some
do, make sure their production processes are being changed / adjusted to take
the environment and sustainability into consideration. Thus, I am always
interested in knowing what they’re doing about it, and I was pleased to see there
was a presentation entitled ‘Sustainability: A Business
Perspective' by Gavin Neath, who is the Chairman Unilever UK and Senior
Vice-President of Sustainability.’ He said that population growth drives everything and that more
food will need to be produced in the next 40 years than was produced in the
past 8000 years, to feed the estimated 9.6 billion people inhabiting the planet
by 2050. He added that resources are already being depleted and Unilever is
already feeling the effects of depletion. He then summarised the company’s
sustainable business plan, set in November 2010 and committing to a 10 year sustainable
growth, which is for all brands across all countries; includes lifecycle
impacts from sourcing of raw material to disposal of the products; and has a
social-economic-environmental dimension. The company aims to halve the
greenhouse gas impact of their products by 2020, reduce their water use, halve
the waste associated with the disposal of their products, and source
100% agricultural raw material sustainably. Basically, the company realises
that consumers choose ethically-sourced products, i.e. sustainable is more
desirable, Gavin added. More details of Unilever’s sustainability plan are available in
their website.

The presentations were followed by a panel discussion / questions from the
audience. Some of the
statements the panel made when answering questions included:

The next 20 years in agriculture will be most exciting,
very optimistic, but we have to change the way we measure success.

Policy-makers follow for the most part rather than lead.

We have to be prepared to pay the price, i.e. be real!

We’re all in this together – us against them is
detrimental.

No doubt we’re going to be eating less meat in future, not
just for nutrition but economic reasons.

Talk to friends and neighbours to encourage change.

People should not go to the gym to burn calories, but reduce their food consumption instead.

One interesting question from the audience was 'Would Rachel
Carson be writing books if she was still alive?' In a nutshell, she probably
would be tweeting.

Prof. Aubrey Manning, University of Edinburg, then gave a very interesting presentation to close
the conference, tackling the question where are we now and where next? Two
points he made which I found worth noting is that each generation has to see
the environment from their viewpoint; and that now-a-days big corporations are
not as powerful as they were in the past because of public pressure – for
example: the prompt response of supermarket to the horse meat contamination
issue. He ended by saying that Rachel Carson and Ruth Harrison are still here,
in our minds, and in the legacy they left. They would have been proud!