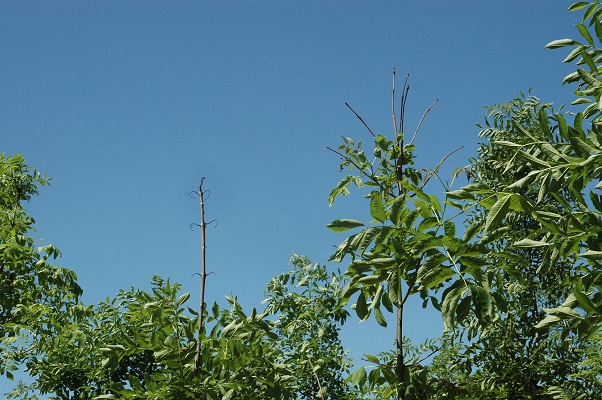 A disease of ash trees, first found in Poland in the 1990s (most reports suggest around 1992) but which has since spread through much of northern and central Europe, has been reported in the British countryside for the first time. The ash dieback disease was first reported in the UK in February 2012 in a consignment of infected trees sent from a nursery in the Netherlands to a nursery in Buckinghamshire, England. Since then, it has been found in a number of other sites in England and Scotland where young nursery trees have been received, but this week the disease has for the first time been found in the natural environment in East Anglia. The disease has devastated ash populations in other European countries, and now it is feared that it could do the same in Britain, where if it takes hold it could have similar impacts as Dutch elm disease had in the 1970s.

Intensive dieback of ash was first observed in the north-western part of Poland, but today is widely distributed throughout the country. In recent years it has spread into many other parts of Europe, and is now present in countries including Austria, Belgium Czech Republic, Finland, France, Germany, Hungary, Italy, Lithuania, Netherlands, Norway, Poland, Slovenia and Sweden according to the European and Mediterranean Plant Protection Organization (EPPO), which added the causal agent, Chalara fraxinea, to its alert list in 2007.

While the disease first appeared in the 1990s, the likely causal agent was first described only in 2006, by Kowalski in the journal Forest Pathology. The new species of the hyphomycete genus Chalara was suggested by Kowalski and Holdenrieder (2009) to be the anamorph of an already described species, Hymenoscyphus albidus, which is considered as non-pathogenic, native, and widespread in Europe. More recently (Queloz et al., 2011), it has been concluded that C. fraxinea is in fact the anamorph of a new species called Hymenoscyphus pseudoalbidus (closely related but distinct from H. albidus, and unlike its relative highly virulent).

Looking at abstracts on CAB Direct, the spread of the disease can be followed. Halmschlager and Kirisits (2008) report that the dieback disease was first observed in Austria in 2005, and Chalara fraxinea first isolated in 2007. Szabo (2009) gives the first report from Hungary, saying the disease first appeared there in 2007. Ogris et al. (2010) provide the first report from Italy, where ash dieback appeared along the Italo-Slovenian border in July 2009. In France, symptoms were first seen in 2007, and dieback of adult trees recorded in 2008. Husson et al. (2010) report it as a recent invader, confined to northeast France.

Visible symptoms of ash dieback include leaf loss and crown dieback in affected trees, and it can lead to tree death. In Europe, affected trees are not just in woodlands but are also being found in urban trees in parks and gardens, and also nursery trees. A government consultation on whether to ban imports of ash trees in the UK is set to close on Friday, and it is widely expected that legislation will be passed in time for a ban to be in force by mid-November. Let's hope it's not too late!

CAB Abstracts has over 70 bibliographic records on Chalara fraxinea, from its first identification to the present day. CABI also produces distribution maps of plant diseases, including Chalara fraxinea. There is also a datasheet on the disease on the open-access Invasive Species Compendium, providing detailed information on biology, impact and management. The ISC has datasheets of over 1500 invasive species in both terrestrial and aquatic habitats, including plant and animal pests and diseases.