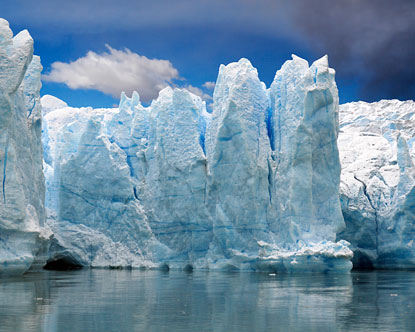 Glaciers and ice caps play an important role on earth’s climate; they
reflect 80-90% of incoming solar radiation; and they’re a major carbon sink,
especially in the Arctic, which accounts for up to 15% of the earth’s carbon
sink. As I reported in my previous blog, scientists alerted that the contribution of
glacial snow melt to the Himalayan river basins remains uncertain, due to a
lack of reliable and consistent data. Today, I came across a new study by
researchers from the Massachusetts Institute of Technology, just published in
the Journal of Physics D: Applied Physics, which provides new
clue to help us understand the reason for the fast rate of glaciers melting
witnessed in the past decades, if not centuries.

The article by Zhao Qin and Markus Buehler entitled ‘Carbon dioxide enhances
fragility of ice crystals’ used molecular dynamics simulations to investigate
the role of carbon dioxide (CO2) in ice fracture. The authors
believe the fracture mechanism of ice is of paramount importance for the
understanding of glacial dynamics, which in turn plays an important role in
controlling the global climate.

Their work involved the reconstruction of the free energy landscape in
varied chemical microenvironments, using enhanced molecular sampling with
metadynamics. Their results showed that increasing concentrations of CO2
molecules significantly decrease the fracture toughness of the ice crystal,
making it more brittle and therefore susceptible to fracturing. The fracture
toughness of pure ice is 19.4 kPam1/2 without adding CO2 (C=0),
while it decreases to 12.0 kPam1/2 with C = 2% CO2, which equates to
a 38% reduction in fracture toughness.

The diagram below explains how CO2 molecules reduce ice crystals toughness.  The authors explained that CO2
molecules affect the bonds between water molecules at crack tip and decrease
their strength by altering the dissociation energy of hydrogen bonds. The CO2
molecules first move closer to the crack tip in a flipping motion and then
attempt to form hydrogen bonds by attacking water molecules under stress. This process repeats itself many times,
leaving broken hydrogen bonds behind and thereby effectively increasing the
brittleness of the ice.

The authors of the new study believe that, in the context of glacier dynamics,
their findings may provide a novel viewpoint that could aid the understanding of
the breakdown and melting of glaciers. This suggests that the chemical composition
of the atmosphere can be critical to mediate the large-scale motion of large
volumes of ice.

It appears CO2 in the atmosphere not only causes glaciers to melt by inducing the greenhouse effect and global warming, but may also affect ice dynamics directly.