It is well known that precipitation derives in part from evaporation from oceans and in part from recycled moisture from terrestrial surfaces. In fact, a new model by van der Ent et al. (2010), which was highlighted in an International Centre for Research in Agroforestry (ICRAF) presentation demonstrates that up to 50% of rainfall in many areas is actually the recycling of water on land. Although external forcing and climatic parameters, such as solar radiation, aerosols and greenhouse gases affect sea surface temperature and, thus, determine oceans evaporation; terrestrial evaporation on the other hand is strongly influenced by vegetation and only in part by climate.

While reading the ICRAF presentation ‘Forest Climate Links Based on Influencing the Water Cycle: Need for Climate Policy,’ to the Bonn Conference, I came across a new term that I hadn’t encountered before, ‘precipitationsheds’ which prompted me to search the CAB Abstracts database and find out more about it. 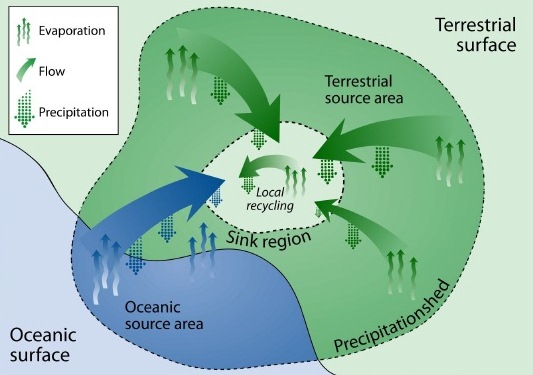 Fig 1 – Conceptual diagram of a precipitationshed, showing precipitation in the sink region originating from both terrestrial and oceanic sources of evaporation (from Keys et al.)