Pre-historic forest discovered buried under coal mine in China – Pompeii of the Permian period! 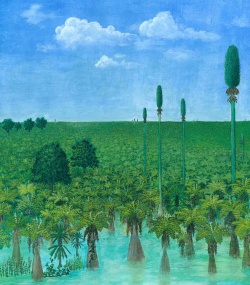 A reconstruction of the 300-million-year-old forest near Wuda, China. Image courtesy of Penn News

The swamp forest was preserved by volcanic ash around 300 million years ago, near Wuda, Mongolia, and was discovered by scientists from China and the USA, who called it the “Pompeii of the Permian period” because like Pompeii the forest was perfectly preserved by the volcanic ash, making it possible to see where each tree was.

The scientists from the University of Pennsylvania, the Chinese Academy of Sciences, Shenyang Normal University and Yunnan University, said the 1000 m2 section of the forest is a time capsule as they are finding fossils of whole trees and plants exactly as they were at the time of the volcanic eruption.

Paleobotanist Hermann Pfefferkorn, from the University of Pennsylvania, and his colleagues from China, presented a reconstruction of the fossilized forest, giving insight into the ecology and climate of its time. Tree ferns formed a lower canopy and either Cordaites, a coniferophyte, or Sigillaria, a lycopsid, were present as taller trees. Noeggerathiales, an extinct spore-bearing plant group of small trees, is represented by three species that have been found as nearly complete specimens and are presented in reconstructions in their plant community. Their study is now published ahead of print in PNAS 2012.

At that time, the Earth’s climate was comparable to what it is today, making it of interest to researchers like Pfefferkorn, who examines ancient climate patterns to help the understanding of contemporary climate variations. However, he noted that because the site captures just one moment in Earth’s history, it alone cannot explain how climate change affected life on Earth, but it helps provide valuable context, i.e. it is like a time capsule allowing us to better interpret what happened before or after.

My Cabdirect search using the terms "ancient forests" returned 2515 records from the CAB Abstracts database, which are accessible to subscribers of the database.

Link to article in Penn News.