Can invasive species become necessary for their new ecosystems?

Invasive species are, in most cases quite rightly, generally seen as a "bad thing". Often free from native predators in their new environment, they can become much more aggressive than in their native habitats where they are in balance with the rest of the ecosystem and held in check by natural enemies, predators and diseases. They can cause extinctions of native species, either directly (as in ground-nesting birds helpless against the introduction of rats and stoats to New Zealand), or indirectly as a result of competition from more aggressive invaders. They can also introduce diseases against which native species have no resistance, as in the case of the Squirrel Pox virus carried by non-native grey squirrels in the UK but fatal to the indigenous red squirrels.

Thus major efforts are made to control many invasive species, with attention often focused on new invaders (to control them before they become so established as to make control prohibitively expensive), or on geographically isolated areas such as islands where there is less likelihood of recolonisation if an invasive species can be eradicated. Thus to use the example of the red squirrel again, almost the only place it still thrives in southern England is on Brownsea Island off the coast of Dorset, where it can be protected from the American grey squirrel which is now ubiquitous across most of England. 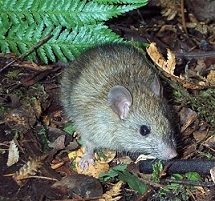 But once an invader has become an established part of its' new ecosystem, can controlling it have unintended consequences? This is the interesting topic addressed in a new study from New Zealand published on 16 November in the Proceedings of the Royal Society B. The research finds that in some cases, animals such as the highly destructive ship rat can become an important part of the ecosystem in the absence of native pollinators, many of which perish precisely because of animals such as the highly destructive ship rat.

The study examined the pollination of three indigenous plant species in New Zealand. Initially, the researchers sought to document the plants' health on New Zealand's North Island, an environment where native vertebrate pollinator species have largely vanished. They wanted to compare the plants' survival to that of the same species in an island nature reserve off the North Island coast where all the native vertebrates still occur (Little Barrier Island). They instead found that invasive pests such as ship rats, introduced to New Zealand by Europeans, were just as instrumental in pollination on the North Island as endemic birds and bats were in the nature reserve.

The researchers examined the effects of vertebrates on pollination by excluding birds, bats and other species from some flowers using wire-mesh cages.

David Wilcove, a Princeton professor of ecology and evolutionary biology, says: "As we expected, native vertebrates were indeed critically important for pollinating flowers on Little Barrier Island; flowers that were caged to prevent birds and bats from reaching them showed poor pollination success. To our surprise, however, we found a similar result on the North Island. Excluding vertebrates from flowers resulted in reduced pollination success, yet these North Island sites had virtually no native vertebrates.

"We wondered what was pollinating these plants. Our video footage revealed that these plants relied on the activity of the invasive ship rat and the non-native silvereye — a small songbird that colonized New Zealand less than 200 years ago and could not have co-evolved with New Zealand's endemic plants. These foreign species performed some of the same functions as the locally extinct native pollinators and, in the case of the New Zealand honeysuckle and Veronica macrocarpa, the rats and silvereyes provided pollination services as good or better than the endemic vertebrates.

"Ironically, ship rats are believed to be a major cause of the loss of New Zealand's native vertebrates. So, essentially the killer stepped in to do the job of its victim."

The study doesn't mean that invasive species aren't harmful and should not be controlled; in New Zealand, for example there are birds such as the kakapo which only survive on islands from which cats, rats etc are excluded. But it does show the complexity of invasive species management, and that we need to understand what functional roles exotic species acquire to ensure that management programmes that specifically target invasive species do not reduce critical ecosystem functions such as pollination.

"We suggest that efforts to control seemingly harmful pests must go hand-in-hand with efforts to restore missing native species so that important ecological functions are maintained. In the case of North Island, eliminating ship rats without also reintroducing endemic birds and bats could be detrimental to native plants. And if those plants decline, then the other species that depend on them surely will, too" says David Wilcove.

The CAB Abstracts database has unrivalled coverage of all aspects of invasive species. CABI has also developed the Invasive Species Compendium, a one-stop shop for information on invasive species and their effects on natural and managed ecosystems. For more information, follow this link.