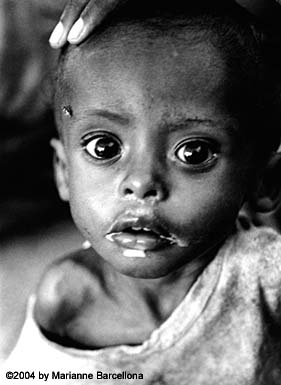 “In the searing heat of late spring, before anyone realized that what was happening here was just the beginning of something much bigger, a tiny girl stumbled through a field of rocks toward a group of international aid workers. She was barefoot and limping. Flies dotted her face, craving the moisture of her eyes, lips, and nostrils. A shabby grey dress smudged with dirt hung limply from her shoulders. Though she was no more than eight years old, she carried her baby sister on her back, a turquoise blanket binding them together. Without speaking, for that would have required too much energy, the girl weakly stretched out her arms, one hand supporting the other. Her dark, frightened eyes were desperate. Please, they beseeched, something to eat, anything at all. In a famine, the starving speaks with their eyes.”  This is an excerpt from the preface of a book, which I thought is a good way to start a blog about the UN World Food Week.

The book by Roger Thurow and Scott Kilman is entitled Enough: why the world’s poorest starve in an age of plenty and summarises the history of famine in Africa: “In 1984, more than 12 million people had teetered on the verge of starvation, and nearly 1 million of them died. The suffering was so intense, so vast, and so pitiable that the world swore such famine would never happen again. Yet not even twenty years later, “never again” was happening again, in Boricha and many of Ethiopia’s blighted regions. And this time, even more people – 14 million – were desperate for something to eat.” Thurow and Kilman argue that for more than 40 years humankind has had the knowledge, tools and resources to end chronic hunger worldwide and yet at the start of the 21st century, 25,000 people a day and nearly six million children a year die of hunger, malnutrition and related diseases. Malnutrition kills more African people than HIV-AIDS and malaria combined, they added. So, what have governments and non-governmental organisation (NGOs) been doing lately to eradicate hunger?

In November 2009, world leaders convened at Food and Agriculture Organisation (FAO) Headquarters for the ‘World Summit on Food Security’ unanimously adopted a declaration pledging renewed commitment to eradicate hunger from the face of the earth sustainably and at the earliest date.

As we all may recall from recent news, on the 7 July 2011 the Disasters Emergency Committee (DEC) announced the launch of an appeal to help more that 10 million people in east Africa, suffering from their worst drought in over half a century.

A total of £38m was pledged to the World Food Programme of the UN by the UK’s Department for International Development (DfID) and this would provide food aid, to be distributed by DEC’s members.

"The West tend to think of famine as a natural disaster, brought about by drought; or as the legacy of war and corrupt leaders," Thurow and Kilman points out, but we see famine as the result of bad policies spanning the political spectrum. When asked in an interview with Worldwatch Institute, what he thought was the biggest obstacle standing in the way of ending chronic hunger in Africa today, Roger Thurow said:  “continued neglect of smallholder farmers by governments in Africa and around the world and by the big development agencies. Short-sighted thinking that continues to ignore the importance of long-term agricultural development. Budget cuts that indiscriminately whack foreign aid and renege on the promises of leaders at the G8 and G20 meetings to increase spending on agricultural development.”

It is widely recognised now that longer-term strategies are also needed to enable people to survive changing environments. Many farmers in East Africa are increasingly unable to predict when or if the rainy season will begin, given the changing weather patterns of recent years due to climatic change. Farm-Africa is working with Kenyan communities and advises them on which plants to plant, including helping them to find more resilient crops.

As if all the existing problems mentioned above (natural disasters, climatic change, lack of serious governments’ commitment to agricultural development) weren’t enough, we now have the added strain of the global food prices, which have risen steeply in the last year and stand close to record levels, according to the FAO. In fact, the FAO marked World Food Day on 17th October by focusing on swinging food prices. "Food prices – from crisis to stability" was chosen as the World Food Day theme for 2011, following five consecutive years of unstable and often rising food prices. The FAO website lists their key programmes and initiatives on food security and has links to their publications, including the report entitled The State of Food Insecurity in the World 2011, which highlights the impacts that the world food crisis of 2006-08 had on different countries.

Farm Africa says that the volatility in food prices is a major driver of food insecurity and hunger and is plunging tens of millions of people further into hunger and poverty. It is estimated that almost 250 million people in sub-Saharan Africa could suffer prolonged hunger by 2020, if efforts by governments and development organisations are not stepped up, but are there many organisations stepping up their efforts?

In carrying out its poverty reduction mandate over the years, the African Development Bank (AfDB) says it has mobilised substantial resources, in terms of loans, grants and technical assistance, for economic and agricultural development in its regional member countries.

Plantwise, an initiative led by CABI, is helping to improve food security and the lives of the rural poor by reducing crop losses. Plantwise has already helped establish over 182 plant clinics in 16 countries and are running pilots in 5 more countries. These clinics have helped over 100,000 smallholder farmers and their families. Follow the above link to find out more on how Plantwise is improving lives and food security in poor countries around the world.

In conclusion, I have given just a few examples here, but I'm sure there are many more dedicated and hard-working NGOs around the world doing their lot to help eradicate hunger. However, I believe there is a lot more governments can do through policies and serious investments in agricultural development in the poorest countries around the world. Suggestions?

Thurow, R. and Kilman, S. (2009) Enough: why the world's poorest starve in an age of plenty. Perseus Books.