Following the heat wave – moths migration to the UK 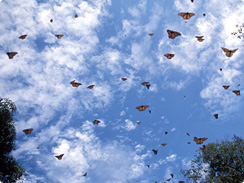 A number of moth species from other countries in Europe and areas as far away as the Mediterranean region have migrated to the UK in the past week, most probably due to the heat wave we have experienced this Autumn, reported various news channels this morning (e.g. BBC News). Some moths travelled for three to four days and more than 20 have been recorded so far this autumn in Sussex, Dorset, Cornwall, Cumbria and the Isle of Man, including the extremely rare tropical species, Spoladea recurvalis, which has been recorded this year for the first time ever in Ireland. Are all immigrant moths welcome though?

The head of moth conservation, from the charity Butterfly Conservation (BC), Mark Parsons, said that moth migration is not unusual in the autumn, but what is special about this year is the large numbers and diversity of moths. The flame brocade, perhaps the most significant arrival, was first spotted by chance in a back garden in Sussex by Michael Blencowe, BC's officer in the county, who told the BBC news “I'd never seen one of these moths before so I grabbed my net and went off to find out if there were any others about at a suitable site nearby. I saw 10 that night and there have been recordings of 20 or more there every night since.” He added that in the past just a few flame brocades have been spotted on UK shores; this is the largest number seen in the country for 130 years. It has led experts to suggest that there may now be a moth colony on the site.

Many of our familiar butterflies and moths migrate and some, such as the Red Admiral butterfly and the Humming-bird Hawk-moth recolonise Britain and Ireland every spring, as migrants from southern Europe or even North Africa, as shown in this BC article. They breed here during the summer months, raising 'home grown' generations, which then return south or perish at the onset of winter . Although, because of climate change Red Admirals in particular are now surviving our winters in increasing numbers.

It has been reported that at least 62 moth species became extinct in Britain during the 20th century, due mainly to factors such as habitat loss, pesticide use and pollution. Many more species are considered now to be nationally threatened and the revised 2007 UK Biodiversity Action lists 81 moths as national priorities for conservation. Therefore, the new arrivals might be actually welcome, unless, of course, there are among them pests like S. recurvalis, also known as sugarbeet webworm, whose larvae feed on spinach, beet, cotton, maize and soybean.

My search of the CABI internet resource Environmental Impact, using the terms "moths and migration and weather" returned 129 records, including those listed below, which are linked to the database for the benefit of subscribers.