24 hours of reality – is this the beginning of a global climate crisis movement? 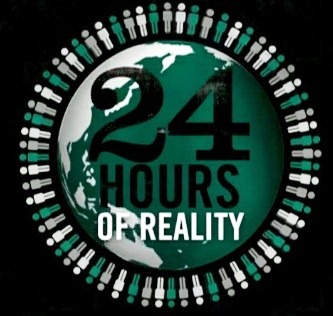 A total of 24 presentations on the climate crisis were broadcast via the internet, starting in Mexico City at 7 pm on the 14th of September and proceeding westward around the globe, so that the presentation happened at 7 pm in each city, ending at 7 pm on 15th September 2011 in New York, on the 24th hour. The message put across is that it is a reality that the global temperature is rising; it’s a reality that the climate is changing; and climate change is increasing the intensity of extreme weather. The recent increase in the intensity of droughts, floods, heat waves, insect outbreaks, wildfires and sea level rise are evidence of a changing climate. Read on to find out more about what was said!

By focusing the world’s attention on the climate crisis for an entire day, 24 Hours of Reality intended to create a global movement and inspire international action to solve the climate crisis the other 364 days of the year. Each hour event highlighted projects and initiatives being undertaken by organisations in each country and offered information and opportunities for people to learn more and to get involved with on-going activities in their own communities. It is hoped that the global discussion would lead to action to solve the climate crisis. The presentations can still be accessed in the climate reality project’s webpage, so you can see the one for your area, if you want to know what activities are there.

Top experts in the world, along with activists and business leaders spoke to remove any doubt about climate change. The presentations gave a snapshot of the global climate crisis in real time, sharing unique perspectives on the crisis from each area. I am sure most of the 3 million people watching the presentation, when I was logged on watching in my lunch hour yesterday, would find it hard to ignore the fact that global warming is real and that it is changing the climate in many areas around the globe. It is obvious that as the planet warms, the hydrological cycle is affected, more evaporation occurs and more intense weather events also occur as a result. Global warming was explained with illustrations and animations in a presentation, making it very easy for the non-scientist to understand it.

While people in many parts of the world are already experiencing the effects of climate change, unfortunately, special interest groups are spending huge amounts of money to convince people that climate change isn’t real. The climate change denial campaign was compared with the tobacco smoking health effects denial campaign of the 1960s. Deniers didn’t have scientific facts to prove their point; therefore they just planted a seed of doubt in the mind of people about the science proving climate change, just like during the campaign funded by the big tobacco companies in the 1960s. The presentation summarised the reality and suggested what needs to be done to save the planet for future generations.

Spelling out the reality

We rely on carbon based fuel for 85% of our energy. Humans produce 35 billlion tonnes of CO2 per year and 55% is absorbed by the oceans, land and vegetation while the rest remains in the atmosphere. Most of the excess comes from burning fossil fuel, more than half from power plants, and 1/3 from transport. If we continue at this rate, by the time our children reach middle age, CO2 levels will reach twice that of our planet’s long time natural levels. That’s why we’re already seeing the increase in temperature and we’re already seeing the consequences, 4% more moisture in the atmosphere above the ocean is enough to transition to a new normal, where it is common to experience dramatic weather events, such as the floods experienced recently in Rio de Janeiro and New Zealand, and the worst ever droughts, followed by wild fires we’ve seen very recently in Texas – over 3 million acres burned. All these events are happening at a frequency and intensity we never experienced throughout human history. In other words: the climate is changing.

We can prevent it, if we act now. The first step is to separate fact from fiction; this climate science is no longer a matter of opinion, politics or dogma, so let’s not allow the dirty energy companies to fool us and slow us down, said the presenters. There are now increasing forms of affordable clean energy available to us and by embracing them we’ll create jobs and improve the economy. The current climate crisis is a reality – we can’t wish it away, but what we can do is to cease the debate and denial and move on to solutions together.

The scope and scale of the climate crisis was watched by over 7 million people who tuned in by hour 23. The question was asked then: is our voice enough to change anything? The answer is yes, just look at previous mass movements (e.g. the falling Berlin wall in Germany and the civil rights movement in the USA). As one of the presenters pointed out this is not a political problem, it’s a human problem! Grass roots movements to expose the reality of climate change and confront those manufacturing doubt are the fastest growing movement now because there is power in the truth, said Al Gore.