Land sparing vs. land sharing: how best to reconcile food production and biodiversity?

In a world of climate instability and ever-growing population, global food security is becoming an increasing concern. How do we feed a population of some seven billion (set to reach 9 billion by 2050) without losing even more of our precious biodiversity by diverting ecosystems such as forests and grasslands to cropland? Do we squeeze ever more production from our existing arable land, or do we need to find a way of increasing agricultural land area while protecting the wildlife on that land? 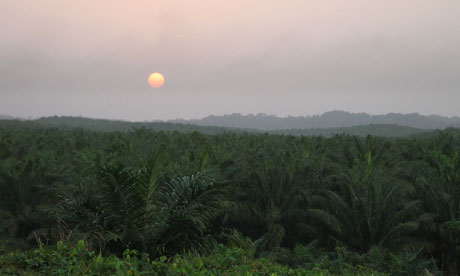 The two approaches can be characterised as 'land sparing' or 'land sharing'. In the first approach, the idea is to produce as much food as possible per unit of land – through intensive farming if necessary – while protecting other land area for biodiversity and ecosystem services. In the 'land sharing' approach, a greater amount of land is farmed, but in a wildlife-friendly way which may impact yields. (Though some would argue that this is not necessarily the case, particularly over the longer term if more ecological farming methods help protect soil fertility).

A paper published in Science last Friday by Phalan et al. compares the two approaches in southwest Ghana and northern India. The researchers from Cambridge University compared crop yields and densities of 600 bird and tree species across gradients of agricultural intensity. More species were negatively affected by agriculture than benefited from it, particularly among species with small global ranges. The same amount of food was produced in all their scenarios, but land sharing harmed wildlife more: the best balance of food yields and wildlife protection was given by a mix of high-yielding farms and plantations with nature reserves alongside.

And the "nature-friendly" farms weren't all they were cracked up to be. "Compared with forest, they failed to provide good habitat for the majority of bird and tree species in either region."

"It would be nice to think that we could conserve species and produce lots of food, all on the same land," said co-author, Malvika Onial, in a press release. "But our data from Ghana and India show that's not the best option for most species. To produce a given amount of food, it would be better for biodiversity to farm as productively as possible, if that allows more natural habitat to be protected or restored."

There are likely to be many who question the conclusions, and the researchers themselves say that their results are "not enough to argue that land sparing is the optimal strategy for reconciling food production and biodiversity conservation everywhere and for all taxa." Different parts of the world and different ecosystems may well give different results. It can also be argued that intensive farming can demand ever-increasing amounts of inputs to maintain yields, and that setting land aside for conservation is no guarantee that it will be safe from future habitat destruction, particularly in those countries where corruption or poor enforcement of protection has allowed widespread illegal logging in the past.

Nevertheless, the study is an interesting one, and an approach that will certainly bear repeating, particularly in places such as the European Union where agricultural practice is heavily influenced by the direction of subsidies. Until recent years, 'setaside' or land diversion – akin to the 'land sparing' discussed by the authors of the Science study – was supported by EU funds, until the policy was dropped for 2008. Since then, funds have instead been directed towards schemes such as the UK's 'Campaign for the Farmed Environment', which encourages farmers and land managers to 'voluntarily adopt important land management practices that will benefit the environment'. But is this 'land sharing' scheme in fact the best approach?

That question is far too big to try and answer here. But with billions still spent on the Common Agricultural Policy, it's one that deserves in-depth study to make sure that the money is spent in the way that best balances agricultural production with the environment.