Ever wondered how much carbon is stored in the vegetation of a whole city? 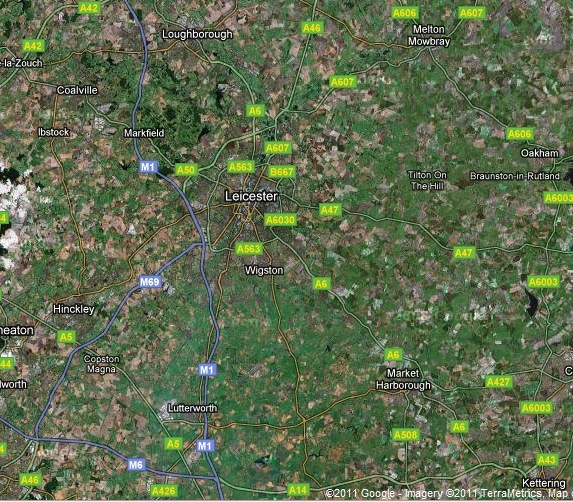 The UK government has recently set a target of an 80% reduction in greenhouse gas emissions by 2050, based on 1990 levels. Carbon storage within biomass and soil has become a common feature of governments' policies to mitigate climate change. Many studies have been carried out recently on the carbon sequestration of forests, wetlands, soil and water (for example, Johnson 2010), but nobody seem to think it is worth determining how much carbon a city's greenery stores for possible inclusion in the national carbon balance sheets. This is probably because not many people consider urban vegetation significant when thinking carbon storage. In fact, in the UK once land becomes urbanised, its biological carbon storage is assumed to be zero. We can now find out whether this is the case, as a new study was carried out to quantify the above-ground carbon stored in an urban ecosystem, and the city of Leicester was chosen as a typical British city. Read on to find out how much carbon is stored in Leicester's vegetation.

The research group was prompted to carry out the study by the fact that although urbanisation is a major driver of land use change globally, there aren’t many studies quantifying biological carbon storage in cities, which is an important element of climate change mitigation policies.The research group carried out a survey of the vegetation across the entire city of Leicester, which included road verges, parks, gardens, riparian zones, golf courses, industrial enclaves, schools and brownfield sites and their results was published in a paper in this month’s Journal of Applied Ecology.

Domestic gardens comprised 40% of the area, with a further 20% publicly owned or managed by Leicester City Council (Public). Outside of Domestic gardens, herbaceous vegetation, shrub, tall shrub and tree patches accounted for 41%, 5%, 1% and 13% of the landcover, respectively.

The study found that an estimated 231, 000 tonnes of carbon (C) is stored within the above-ground vegetation of Leicester, which equates to around 3 kg of C per square metre of urban area. The carbon stored in domestic gardens was very low and amounted to just 0.76 kg C m-2. One of the main factors for this is the trend in recent years to convert gardens to hard surfaces by concreting, paving and decking. Another important factor is the lack of trees in gardens; if 10% of the existing 159,000 urban gardens had one or more tree planted in them, there would have been 900 tonnes more carbon stored in the above-ground vegetation across the city, said the authors of the study. The greatest above-ground carbon density, 28.86 kg C m-2, was associated with areas of tree cover on publicly owned / managed sites.

It was shown in this study that current national estimates of above-ground carbon storage for Britain undervalues the contribution of cities by an order of magnitude in the case of Leicester. This is because the national scale map averages carbon stocks across a 1-km grid, based on a limited number of field samples and zero values for intensely built up areas. According to these average stock maps, Leicester represents only 0·03% of the country's carbon stock, which is estimated to be 113·8 Tg. Yet, there is a substantial 231 521 tonnes of carbon stored within above-ground vegetation in Leicester, the equivalent to 3·16 kg C m−2 of urban area, which means that in reality Leicester accounts for 0.2% of Britain's above-ground carbon store. Cities, therefore, should not be ignored in terms of carbon storage.

Biological carbon emissions and sequestration from different land uses, land-use change and forestry must be accounted for, so as to fulfil international obligations to produce national inventories of greenhouse gas emissions by sources, and removal by sinks, as well as meeting reporting requirements under the Kyoto Protocol (Dyson, Mobbs & Milne 2009). This includes recording carbon loss and capture because of the conversion of land through the process of urbanisation.The results of this study illustrate the potential benefits of properly mapping and accounting for above-ground vegetation carbon stores, even within a typical densely urbanised European city, so that accurate carbon storage figures can be included in national carbon balance sheets. I think it also indicates that we should be planting more trees in our gardens and that, as well as putting measures in place to reduce carbon emissions, local government planners should include tree-planting in every urban development. Trees are not permanent carbon sinks because they will release their carbon to the atmosphere when they die, which means we should be replacing trees as they die.

Dyson, K.E., Mobbs, D.C. & Milne, R. (2009) Annual inventory estimates for the UK (WP 1.1). Inventory and Projections of UK Emissions by Sources and Removals by Sinks due to Land Use, Land Use Change and Forestry (ed K.E.Dyson), pp. 13–49. Department for the Environment, Food and Rural Affairs, London.