The World Animal Health Organization (OIE) has declared that the cattle disease Rinderpest (also known as Cattle Plague) has been eradicated, which means that all 198 countries and territories with rinderpest-susceptible animals were free of the disease. The global disease freedom status is expected to be ratified by Ministers of Agriculture at the Food and Agriculture Organization of the United Nations (FAO) conference on 28 June. 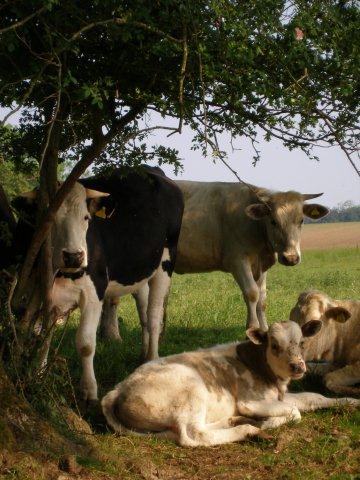 This is the first time ever that a viral disease of animals has been eradicated. The last outbreak of Rinderpest was confirmed in 2001, when buffaloes were infected in Kenya. Rinderpest now becomes only the second viral disease ever to be eradicated, following the elimination of smallpox in the human population, which was last seen in 1977. A certain amount of pride in veterinary medicine about this achievement is almost palpable, which will undoubtedly lead into better animal health, and consequently better public health.

Rinderpest was a viral disease (caused by morbillivirus) that affected cattle, buffalo, sheep, goats, and wild animals such as antelope, giraffe, kudu, and wart hogs. The disease has killed hundreds of millions of cattle around the world for centuries. It was a highly contagious disease which could kill infected animals within days, wiping out entire herds. The disease has devastated livestock herds since Roman times, leaving economic ruins in its wake – it is speculated that the disease contributed to the downfall of the Roman empire in 4th Century. While waves of the disease regularly devastated livestock herds in Asia and Europe over history, animals elsewhere were spared the disease until 1887 when it was introduced into the Horn of Africa. A 19th-century outbreak of the disease in Ethiopia resulted in famines that wiped out one third of its human population.

In response to the devastation caused by the plague, the world’s first veterinary school was founded in Lyon in 1761, which is usually regarded as the beginning of the modern veterinary profession, (our profession this year celebrates its 250th anniversary, see blog). In 1924, the World Organisation of Animal Health (OIE) was formed because of the continuing threat of Rinderpest. Control of Rinderpest was also one of the primary reasons for the creation of the FAO in 1947.

According to the FAO, Rinderpest was at its peak in the 1920s, when the disease spread from Scandinavia to the Cape of Good Hope in South Africa and from the Atlantic shore of Africa to the Philippine archipelago, with outbreaks reported in Australia and in Brazil.

The first steps to control the disease were made following the development of the “Plowright vaccine” in the 1950s. Dr Walter Plowright, a British veterinarian, and his colleagues developed an attenuated-live virus Rinderpest vaccine in Kenya. Further advances were made when the Plowright vaccine was improved in order to remain stable in the extreme heat of central Africa, and when effective control and immunization programmes were implemented.

In 1994, the Global Rinderpest Eradication Programme (GREP), headed by the FAO was launched. GREP initially focused on establishing the geographical distribution and epidemiology of the disease and later it promoted actions to contain Rinderpest within infected ecosystems and to eliminate reservoirs of infection. Once experts were satisfied that the virus had been eliminated from a region, surveillance schemes were put in place to ensure it did not return. Eradication required enormous efforts of veterinary professionals and local residents to ensure that the disease no longer existed.

Some 10 years prior to the peak of Rinderpest epidemic, CAB International was established in 1910, and since then CABI has been facilitating communication and exchanging veterinary information on animal diseases such as Rinderpest to more than 150 countries and in over 50 languages. The CAB Abstracts database currently contains more than 4600 references with abstracts on Rinderpest from 1913 to the present. The database can be searched to find the world’s literature on this topic using either “Rinderpest” or “cattle plague” as search terms (4233 hits for “Rinderpest” and 3639 hits for “cattle plague”).